You were constantly tired from working endless hours day in and day out. You had very little time to think about the world and when you did, you didn’t have the words to describe what you saw and felt. However, you had used every spare moment to puzzle together scraps of clues into a bigger picture and had created new words with meanings that your heart dictated, but that were otherwise unknown. You felt that you were now so close to wrestling away the power from your oppressors and turn this world into a better place – but you knew you had to make sacrifices to build your Euphoria: Build a Better Dystopia by Stonemaier Games. 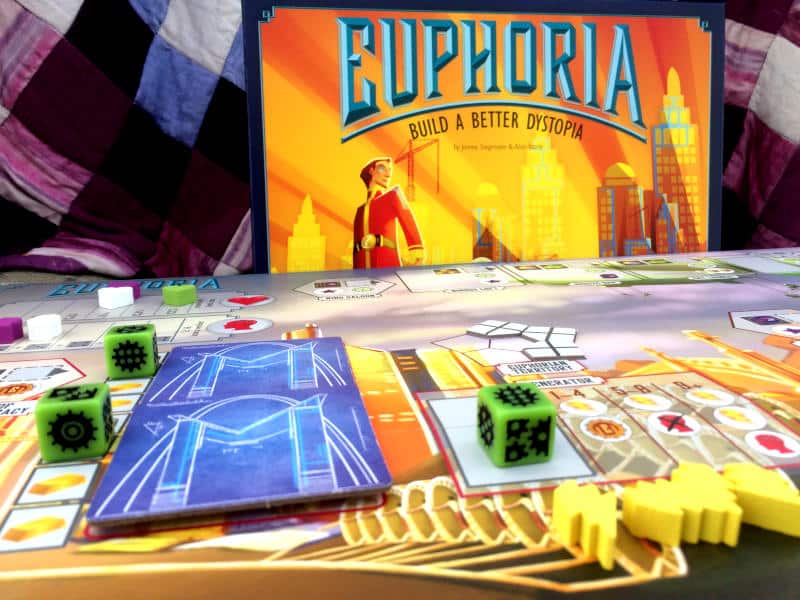 Let me start by saying that this review is based on digital plays of the game only. I have a physical copy of Euphoria, so I know what the components look and feel like, but never played it in real life. That’s why this article comes under the new heading of “Digital Eyes”, which are reviews of games I only played online. With that out of the way, let’s move to the actual review.

Yes, this is almost a classic game now, dating back to 2013, and one of the first that Stonemaier Games released. Euphoria is a worker placement game, where workers are represented by dice, and it’s a traditional resource management game, with action spots where you convert basic resources into refined resources which in turn can be converted into something else and so on.

It’s all pretty much what we’d expect from any modern dice placement and resource management game these days, but not quite. Whereas many modern dice placement games make the pip value of the workers integral to every action, in Euphoria it almost doesn’t matter at all how high or low a number you roll. What matters much more instead is how you combine multiple dice to create a higher result, and when it comes to producing resource these dice can be your own or other players’.

Sure, you are encouraged to roll low numbers, which sort of represents how “aware” the workers are of the dystopia they live in – the lower the pip value, the less aware they are, meaning they won’t run away in despair. However, even when you roll sixes, you are probably not penalised and you still won’t have enough pips to make resources in the most efficient way. You will still need to combine with at least one more dice to get to the top tier of resource production efficiency.

It’s really only when you’re greedy and get additional dice in the hope to be able to do more, that you run the risk of losing them if you roll too high. However, even then you can manage the risk by keeping most of the dice on the game board, where the workers are considered as too occupied to worry about the world they live in and therefore won’t run away.

Euphoria is really much more about dice management, than it is about resource management, and that’s my favourite part of the game. You all start with two dice and you can get up to four, but when you do, you have to really think about where you place them, so you don’t lose them again.

However, you can’t forget about the resources either. You can produce plenty of basic resources relatively easily, but it’s a lot harder to then convert those into refined resources that you need to get closer to winning. In fact, I’m using the wrong terminology. The basic resources are called “commodities” in the game, while the refined resources are called “resources”. Putting the terminology to one side though, the concept of resource conversion is pretty common and the better you are at it, the more likely you are to win the game.

The problem is, Euphoria is no engine builder. You would think that you can improve your resource production, and to a limited amount you do via the allegiance tracks, but in reality, it’s not your engine that’s improving, but everyone’s. So round after round, you produce your “commodities”, then convert them into “resources” that you can then use to get “artifact cards”, which ultimately are what allow you to place “authority tokens”, which are star-shaped, and when you place your tenth star, you win the game – immediately.

Let me address the immediate end of the game now, before moving on. Euphoria is just like Scythe in that it immediately ends when someone places their last star – their tenth star in Euphoria, while it’s the sixth star in Scythe. There is no finishing of rounds and there is no attempt at ensuring every player gets the same number of turns. Some people hated it in Scythe, so those same people will hate it in Euphoria. It just takes longer to get there.

And that’s my main issue with the game. It just feels so slow to play and so slow to achieve anything. There is no feeling of it speeding up in any way either. There is no feeling of progressing or achievement. Every star you place was just as hard-earned as the previous ones. It doesn’t feel like you did anything differently. The stars aren’t like the different mini-achievements that they represent in Scythe for example. It’s a slog and it feels everything should be over when someone placed their fifth star – or maybe their sixth, like in Scythe.

The game board also feels very overwhelming. There are so many action spots and it’s not obvious what you should do to finally be able to place your star. You have to work backwards, step by step, and keep reminding yourself why you got the commodities you got and what it was you were hoping to do with them. When you do remember, you have to carefully scan the board to find the action spot you need to do what you had planned. It just doesn’t feel intuitive to me.

Don’t get me wrong, the artwork is amazing and the setting is brilliant. The premise of the game is also really appealing and 1984 or similar stories come to mind when you play. In a way, the gameplay does emulate the drudgery of the workers, the monotony of their lives and the constant need to keep them ignorant really well. Yet, unfortunately, that makes for an uninspiring and unexciting game experience.

Of course, the components of the game are really good quality, as you have come to expect from Stonemaier Games, and as I said above, the illustrations are also really great. You can see more in my unboxing video. Unfortunately, the gameplay doesn’t come up to scratch for me. I really wanted to like this game, and there are many mechanisms and ideas that had great potential and attracted me to Euphoria, but it just didn’t work out.