The monsters are on the rampage. Military jets fill the skies while tanks rumble through the gridlocked streets. There is the endless noise of sirens and people screaming. It’s absolute chaos on the ground, but to you, it’s more of a minor irritation than anything much to worry about. The jets are like wasps with a painful sting and the tanks like cockroaches trying to bite you. Your real worry are the other monsters, whose attacks could kill you. You’re desperately trying to get to Manhatten and become the King of New York in this exciting game by Iello. 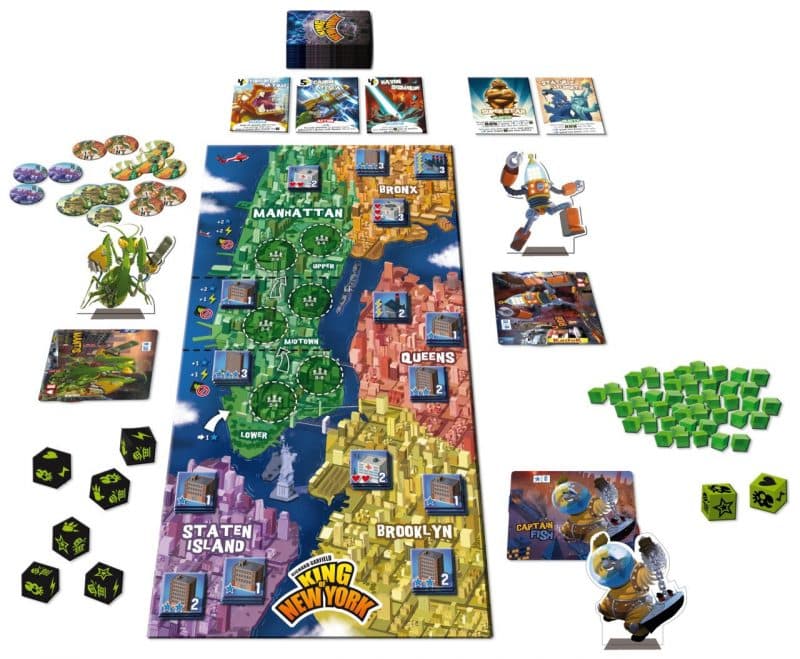 It is the follow-up to King of Tokyo, and without giving too much away, let me say that I much prefer this iteration of the game to its predecessor. Both games are very much the same. You roll dice for attack, energy or health, pushing your luck as you would in pretty much any dice rolling game. You buy bonus cards to add to your tableau, which give you more abilities, which also isn’t anything new. You use your attack to damage the other monsters in the game, and you win if you’re either the last monster standing or the first to reach 20 points.

It’s all very simple, yet it is so much fun. You do have to always decide whether to build up energy cubes, so that you can buy powerful booster cards, that will benefit you in the long term, or simply go for attack to try and kill everyone else before they can build up any advantage.

It gets even more exciting when you’re close to no health and decide to ingore the hearts you roll and instead focus on getting the extra energy cube you need to get the ultimate booster card that will guarantee you the win. Your gamble won’t always pay off, but it’s amazing when it does.

Like in King of Tokyo, it’s a battle of one against the rest, or rather, whoever is in the city, which is Manhatten in this game, not Tokyo, fights against everyone else – but you can decide to leave when you’re attacked, forcing the attacking player into the centre and making them the target. It’s another decision where you have to weigh up the benefit of staying in the middle one more round, risking death, or leaving to be able to heal.

What makes this so much more interesting in King of New York, is that you actually move along Manhatten, getting ever more bonuses, the longer you stay. It makes that decision to remain or leave so much harder. There is so much temptation to stay one more round and get the points you need to win – but your health is so low that it would be sensible to retreat.

Yet, King of New York adds one more level to the decision making. Each borough of New York is seeded with tokens that you can use to gain a benefit, such as health or energy – but when you do, they get replaced with military units, which may attack you during the round, even when it’s not your turn. The dice have extra symbols that decide if these units attack or not, and whether they attack only your borough or other every monsters’ boroughs. It allows for a new strategy, where you intentionally want to trigger those units to damage your opponents – and it gives the monster that is in Manhatten a way of getting health, as well as an additional way of attacking the others.

As I said at the beginning, given the choice, I will always recommend King of New York over King of Tokyo. It just gives you so many more options and makes the game so much more interesting. So if you like dice rolling and an epic monster battle, then this game is definitely for you.