We all love to play board games. We each have our favourite genres, themes and mechanisms, and ultimately our favourite games. Over time our favourites change of course, as new games come out and we get a chance to play them. Yet, when we play a board game, we don’t usually think about how this game came into being in the first place. Chances are we know the designer of the game. In fact, we might have chosen the game because we like other games by the same designer. Yet, very few will have any inkling of the hard work the designer has put into taking a spark of an idea and turning it into a working game. In the film The Games Designers written and directed by Eric Rayl, Mike Selinker phrases it really well: “Board game design is hard, like, I mean, real hard.” 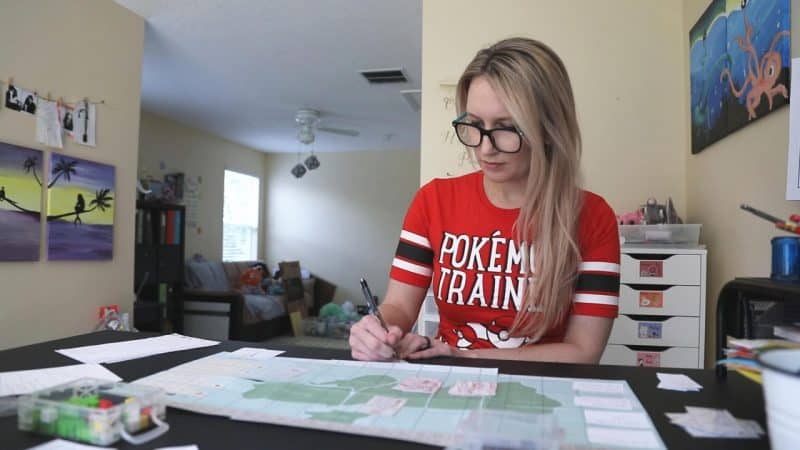 (Kelly North Adams gets a new prototype ready for playtesting)

I have tried to capture some of the challenges that board game designers face in my article Design challenges, but there is a lot more to it of course. The film The Game Designers does a much better job than me. It follows a number of designers as they work on their games, all of which are at different stages of development.

First, we meet Chris Faulkenberry who is a first-time designer and his game Battle for Biternia took several years to develop to a stage where it is ready to be published. We see him invest a lot of time into publicizing the game, taking it to as many places as possible to put it in front of as many people as possible. He visits smaller, local gaming events, as well as the various big conventions. He has decided to self-publish the game, which is one way that many new designers try and make a success of their idea, but this option comes with a number of challenges and disappointments. Of course, it also provides a huge high if the game funds and is made into a real product at the end of it all, but often that isn’t what happens.

Next, we meet Doug Schepers whose game Spells came to him all in one go. He is only at the very beginning of his journey as a game designer and clearly very passionate about his game. We get a glimpse of the struggles he will face along the way, when we see how he deals with feedback from an initial playtesting session. It is clear that there will be many hard lessons to be learned, as his original idea for the complete game changes over time – often dramatically.

We are also introduced to Kelly North Adams, who has a number of games at various stages of development, and it is immediately clear that she is further along the path. She wants her games to be accepted by publishers, so a lot of her work involves identifying the right companies for her games and pitching to them. That path means she will hand over control of her games to someone else and she will have to accept that her games are likely to go through a number of changes until they are published, but it also means that she doesn’t have to worry about manufacturing, shipping, customer service and the many other jobs that come with publishing a game, allowing her to focus her energy on designing new games.

Already we see three, relatively new, designers and the challenges they face with their different approaches to getting their games published. Of course, these three people represent dozens, if not hundreds, of other new game designers, who are all working on their games and all have different ways of bringing their ideas into the world. Following these three people on part of their journey is a great insight into how games get to our tables.

The film also introduces us to Matt Leacock and Antoine Bauza who don’t actually need an introduction. They are two established designers and have a good number of published games to their name and their experience comes across very clearly. They have refined their approach to game design and you get the feeling that some elements have become very much routine, which feels a little like some of the fun of game design has gone away, but it is obvious that it allows them to create successful games more quickly and reliably. Working closely with game publishers seems to create different challenges for them. It feels like the focus for their design process is on the commercial viability of a game, rather than just the fun of creating something new.

The film also contains a lot of commentary from many other popular game designers, which back up the experiences that the other designers have shared with us, the viewers. It creates a very rounded documentary with a lot of information and a great look behind the scenes of modern board game design.

I love how you never hear Eric‘s voice, except once, throughout the film. It is only the designers’ and a handful of board game media people’s voice that tell the story. It makes you feel like they’re talking directly to you personally, giving the whole film a very intimate atmosphere. It brings the designers’ journies, emotions and experiences right up close to you, as if you were there right next to them. As you watch the film, you begin to feel yourself the frustrations, nervousness, confidence and joy these people feel as they tell their stories.

The Game Designers is a great film that shows us a lot of what we normally don’t get to see or hear and if you want to find out more, the collector’s edition also has a commentary track from the director and executive producer that accompanies the main feature, plus a number of featurettes, extras and deleted scenes, which give you even more of an insight into the game design process.

Let me finish with a quote from Mike Selinker who rounds it all up nicely by saying “that there are […] real things that board games do, that no other type of game can do, and […] we’ve changed society because of it.”
If you enjoyed this article, please hit the like button below and subscribe to my blog. It would help me a great deal. It would be even better if you also told your friends about me.