“I know,” said the King’s master builder, “if we use modular rooms, all of them square, we could manufacture several of them, all at the same time, in our many workshops, transport them to the site as they are finished, and connect them on-site to build a magnificent castle, befitting our Highness’ standing and reputation. In fact, we could build several castles all at the same time, all as glorious as each other.”

“Exactly,” the King’s master builder replied, “but imagine the wonderful feeling of amazement our Royal Highness will get when he surveys the construction from a vantage point Between Two Castles of Mad King Ludwig.” 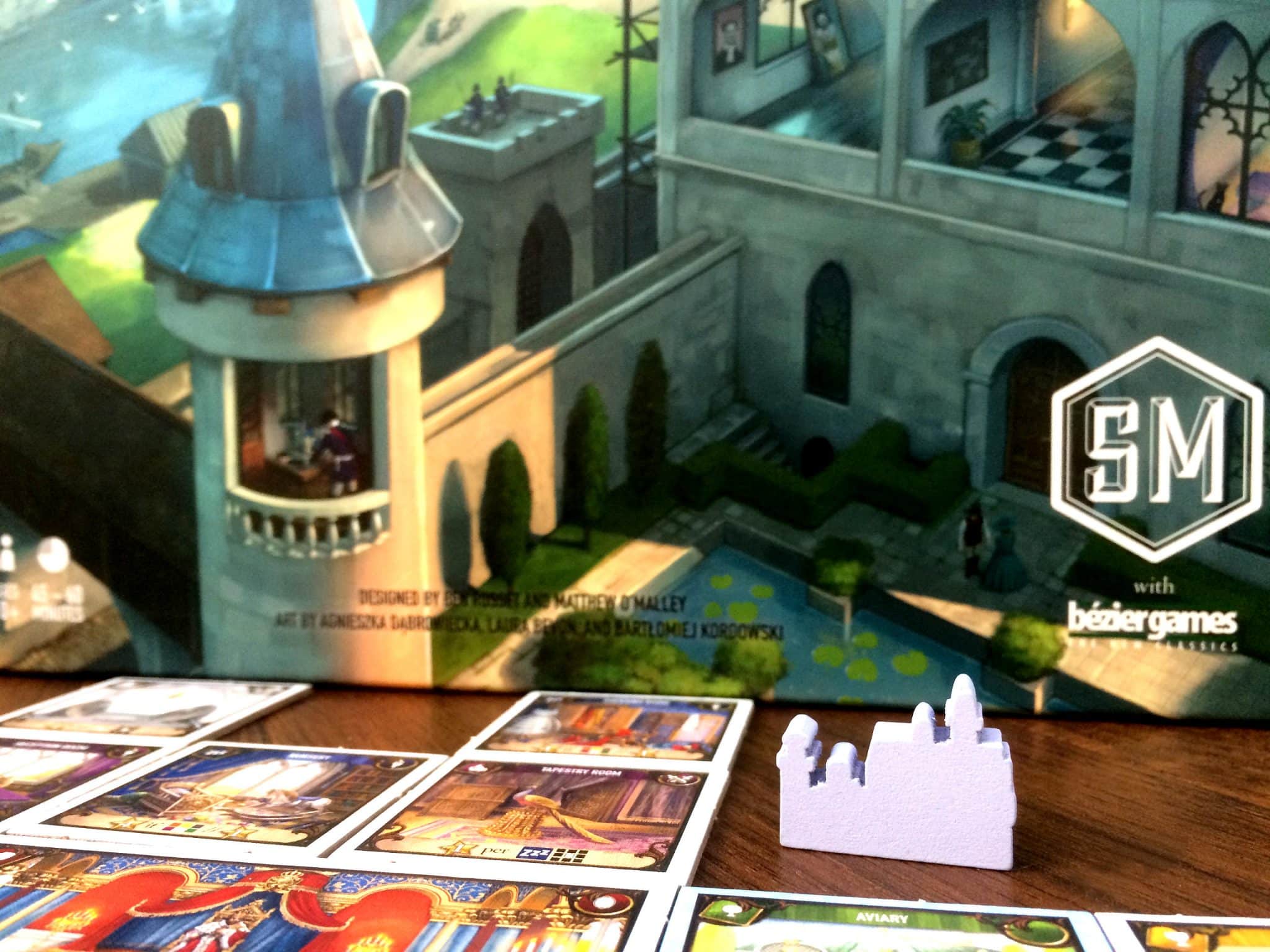 Stonemaier Games and Bézier Games have worked together to make a mash-up of Between Two Cities and Castles of Mad King Ludwig, two very popular games in their own right, which promises to take the best of both games to create a tile-laying puzzle that’s half co-operative, half competitive. If you ever played either of those games, you will quickly be at home with Between Two Castles of Mad King Ludwig, and if you have played both, it should be really easy to pick up.

The game is actually quite a light game and over in a matter of less than an hour, which means you can easily play it several times in an evening. Playing time is so low, because everyone makes their decisions at the same time. Sure, you will sometimes have to wait for a player to finish choosing their two tiles, but at least you will have spent the time making your own choice. It really helps the game flow very smoothly and quickly.

The decisions you make during the game are also pretty simple. You have to choose two tiles out of nine or less, and both choices are usually really obvious, even when your castles are quite large. Sometimes you will probably want to work out the scoring potential of three or four tiles, before you make your choice, but because you never really know what tiles you will be handed next, it is often more of a guess than a definitive choice.

The thing is, Between Two Castles of Mad King Ludwig is so light and quick to play, that it is very frustrating that it takes quite a while to explain and learn, if players aren’t familiar with Between Two Cities or Castles of Mad King Ludwig – in particular, the latter. It will take two or three plays before people will start to understand how the different rooms score and how they depend on each other. The whole game is about the pull and push of one room type wanting other room types, which themselves want different room types altogether. The first few plays will feel like you’re just placing tiles where they look nice, rather than making considered decisions.

The scoring of the castles at the end is also quite time-consuming. You have to go through the room types and score each room in the castle of that type, then add up the total score for that room type, before finally adding together the room type totals to get your final score. The scoring alone can take a good five to ten minutes, which represents a good chunk of time for a game that takes only 30 minutes or so to play.

So overall you have a really calm game, where players co-operate while at the same time try to get the win for themselves, which is a really interesting push and pull. The illustrations are beautiful and there are plenty of really inventive and fun rooms to place into your crazy castle. My favourite is probably the bunny room, and the spy room with a courier pigeon is a close second. Playing the game is a thoroughly pleasant experience, but at the same time, there are no highs or lows. It’s all a bit samey, which isn’t necessarily an issue. I quite like games that aren’t too taxing and a pleasure to play.

The problem for me with Between Two Castles of Mad King Ludwig is the learning threshold and the time-consuming scoring at the end. The game doesn’t reward players for their efforts with moments of excitement or tension during the gameplay. There isn’t even the satisfaction of finding the perfect position for the perfect tile in your castle, because you can’t really plan ahead of what you want to build.

One last, if minor, gripe is the fact that the tiles aren’t machine cut, but have to be punched out. That means there is a tiny tag on each of the four edges of each tile, stopping you from lining the tiles up without a gap. For people who enjoy Carcassonne because the tiles perfectly fit together, this will be a frustration.