After a short journey by train, you arrive in Berlin at Friedrichstraße central station. Wasting no time, you immediately take the stairs down to the U-Bahn platforms. You want to see as much of this metropole as possible, not just the usual tourist sites, but also the more regular stations that locals would travel to. Your first destination is Zitadelle in Spandau, after which you want to see the famous Potsdamer Platz. However, as you arrive on the platform, you notice there are no trains running. It turns out that you have to take a taxi to Jungfernheide, after which you can take the yellow line to Zitadelle, then back to Jungfernheide and another taxi to Zoologischer Garten, where you can catch the white line. It seems weird, but this is On the Underground London/Berlin by LudiCreations. 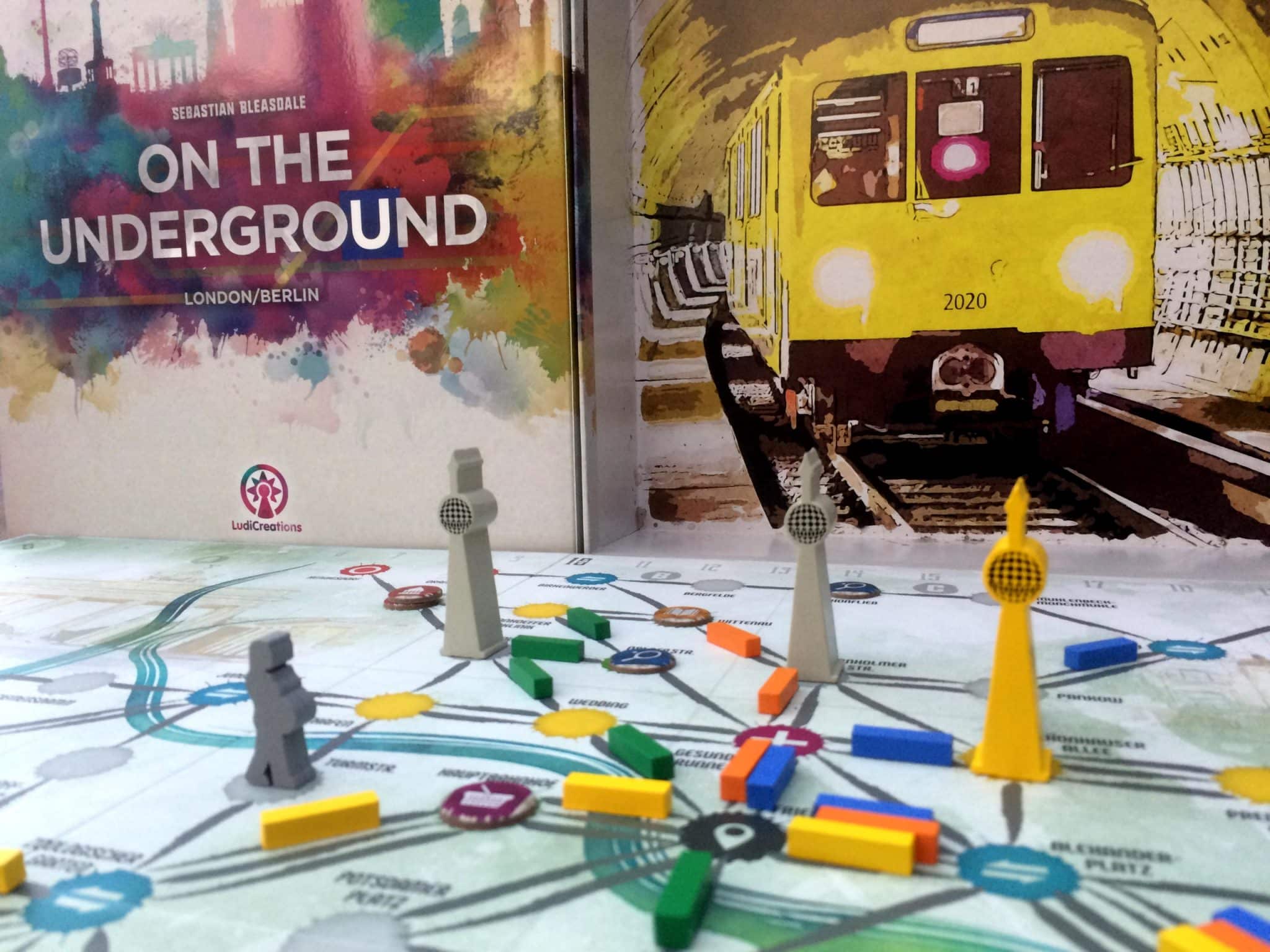 Yes, the idea that in the game you’re competitively building the local public transport network of either Berlin or London, but you’re restricted to laying tracks only on given routes, which match the real-life underground train network, is a bit strange. It seems to imply that the tunnels have already been dug by local authority contractors, but the tracks are for you and the other players to sort out, probably including the supply and running of the rolling stock.

However, as you play the game, you quickly forget about this bizarre premise. All you focus on is deciding where best to place your coloured wooden sticks, which represent your track, so that the customer will choose your lines over your competitors’. At the beginning of the game this is quite easy, as there are no lines present. However, you do want to leave yourself some room for expansion later, so a little thought at the start of the game can be helpful later.

Depending on player count, you may commandeer two, three or four different track colours, which changes the feel of the game quite a bit when you play two versus four players. I have played it at both player counts, and while you have plenty of choice in a two-player game, where you have four different track colours, in a four or five-player game you have to really work hard with the two colours you have at your disposal.

However, even when you only have two colours to choose from, the game never gets so hard that it’s impossible to make points. There are always opportunities to increase your score, other than enticing the customer to travel on your lines. In fact, as the game progresses and the map fills up, reducing the possibilities of where you can lay your track, you will still be able to extend your routes to bypass other players’ lines, if not completely, then enough to give yourself some points as well as conceding points to another player.

So I’d argue this game is actually relatively friendly. There are plenty of opportunities to make points, even if your competitors have cut you off and blocked your path completely. It means On the Underground London/Berlin is a relatively light game, in particular because you can’t plan ahead at all, but you’re guided on your turn what you should do by the destinations available to the customer.

I know a lot of people have complained that it is hard to work our what route the customer will take, especially after a few rounds, and it slows the game down, but I’ve never found that a problem myself. Maybe it’s because I’m quite a visual person, so it’s possible I just see the route with the least walks and least changes required.

I really like On the Underground London/Berlin and am grateful that LudiCreations have added the Berlin map, which is the main reason I bought the game in the first place. I was born and grew up in this amazing city, so there is a bit of nostalgia for me when I play the game, and maybe that’s skewed my opinion of it.

However, my wife also loves the game and we have played it many times. In fact, she was the one teaching it to the in-laws over the holidays and got them to play it with us a few times. I think that shows that it’s a lovely game, that’s not too hard to teach and can be enjoyed by people for various reasons.