Focus your mind on this life, and prepare your soul for the next. The actions you take now allow you to reach fulfilment and ascend from dung beetle to Nirvana. However, don’t overreach and make sure you delay some actions, so you can use them in your future life. If you fail, you collect Karma and get a better chance at moving up the Karmic ladder when you next get reborn in this game of Karmaka by Hemisphere Games. 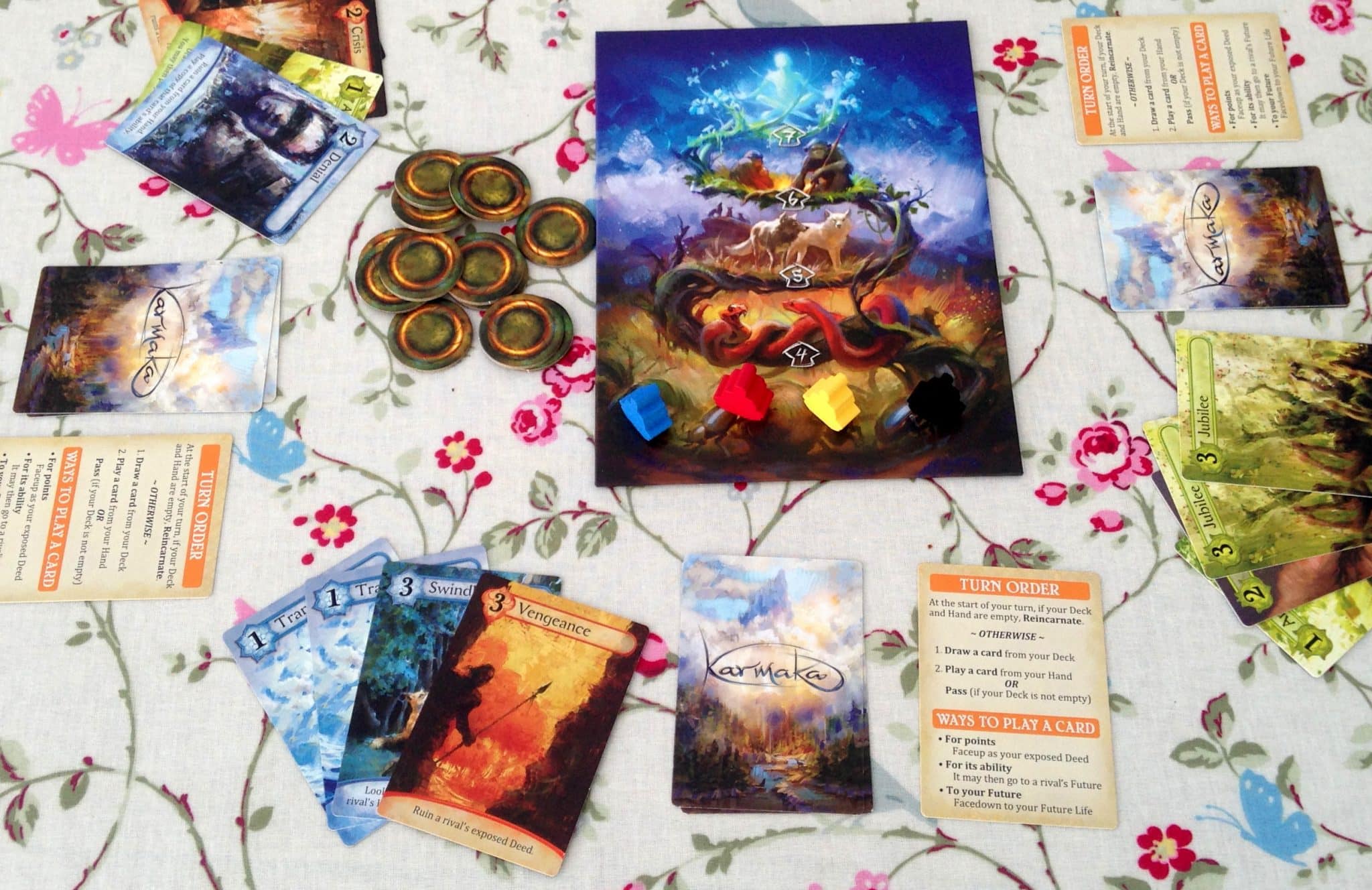 You could describe Karmaka as a competitive card game with a clever mix of deck building and set collection and a fair amount of take-that. You have a hand of cards which you can play for their points or their abilities, as you try and build up a set of cards of the same colour that add to a certain number of points that allow you to reach the next rung on the Karmic ladder – and when you reach the top of that ladder, Nirvana, you win the game.

Of course, having two options to use a card already creates an interesting decision, in particular because most of the abilities affect other players. Yet, there are many games with multi-use cards, so that’s by itself is nothing special. The interesting twist is that when you use a card’s ability on another player, that player may take the card and put it into their “future life” – the deck of cards that they will be able to use when their current hand runs out and they are “reborn”. So something that you do to someone else, can easily come back to you later. That’s Karma, after all.

If the other player keeps the card you played on them, they can of course also use it for points in their next life – and the meaner a card is, the higher its point value. Again, the theme comes through really well. If you are dealt a blow, you get repaid in your next life.

There is one more thing you can do with a card though – play it to your own future life. So that’s your way of either getting rid of cards that are no use to you now, because they don’t quite fit the other cards in your hand, or to store valuable cards for your next life, so that moving up the Karmic ladder becomes easier after you’re reborn.

After all, as you go up the levels, it gets harder and harder to ascend. That increasing difficulty is also a way to give other players a chance to catch up. It’s not unusual for a couple of players to go up two levels on the ladder very quickly, while a third might struggle – only for that player to overtake the others later and win the game.

The illustrations in Karmaka are absolutely stunning. Marco Bucci‘s art style is so very beautiful and works really well for the game. I highly recommend you follow him and see the amazing paintings he creates, or watch the tutorial videos he makes, if you’re interested to find out more about his technique.

However, ultimately what makes Karmaka such a clever game is all in the decisions you make for every single card you play. Whether you play a card for its ability, points or to keep for the next life all affect what the future holds. You are in control of your luck – and you can directly affect other players, but have to consider how they may retaliate. So don’t be too harsh, or you give your opponents too much power – but don’t be too kind, or Karma may be in their favour and allow them to reach Nirvana before you do.