As witches fly overhead, giants stomp around the wastelands, swarmlings huddle in swamps, chaos magicians cause, well, chaos, halflings burrow the plains and engineers build their bridges from their mountains, you roll up your carpet and prepare to continue through the desert in your nomad way. As you consider the scene in front of you, something nags you. Engineers building bridges from mountains – that doesn’t sit right somehow. Yet, that’s not all. Suddenly the desert in front of you terraforms into a wasteland. Deserts aren’t much of a laugh and wastelands don’t seem much different, but terraforming in this fantasy setting seems completely out of place. You half expect a spaceship to land in front of you, when instead a giant places a dwelling in the newly created space. Not only that, they then proceed to convert the dwelling into a trading house. It is not clear what giants have to trade, but you consider it for a moment, before you decide to send one of your priests to advance on the cult track for air – because after all, everyone needs air to live. A moment later you realize that you’re in a giant game of Terra Mystica by Z-Man Games. 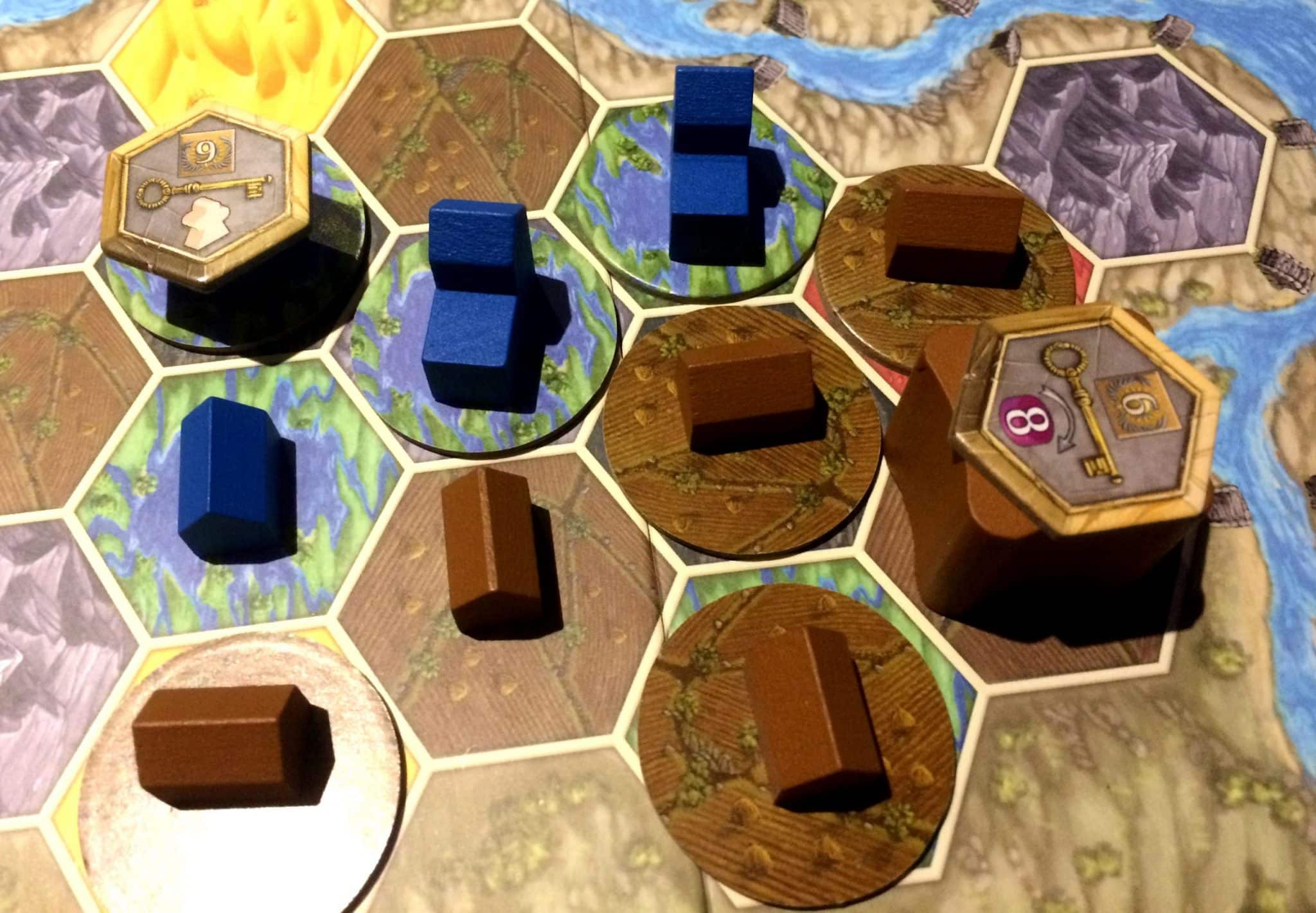 As you will have gathered from my introduction, there are a fair number of things that are wrong with the overall theme of Terra Mystica. It is something that bothers me a lot. I feel strongly about themes in games, as it helps me understand what it is I should do to win the game. If a theme is at odds with the gameplay or just seems disparate or even contradictory, I won’t enjoy the game, because I will never quite know what outcomes my decisions are likely to have, which is frustrating for me.

Don’t get me wrong. Theme isn’t critical for me to enjoy a game. I really like playing abstract games, and the same was true with Terra Mystica when I decided to turn it into a completely abstract game in my head by ignoring its theme and simply treating every faction as a colour on the board that has different abilities to others, the priests as a way to gain end game points and refuel my bowls of power, which in turn allow me to take special extra actions, and by looking at buildings as a way to gain more workers, money, priests or power on my next turn, as well as gain more points and control more area, which also gives me points.

In Terra Myistca, your aim is to spread out over a fixed map divided into hexes, which are grouped into islands divided by rivers. You need worker cubes and money to carry out actions, and you get these by placing dwellings, which you can upgrade to tradings posts. You will also need priests to go up on the cult tracks, and you get these by converting trading houses into temples, which in turn can be changed into sanctuaries. If you want to unlock the special ability that is unique to your faction, you need to convert a trading post into a stronghold.

The building process sounds involved, but is really clever, because as you upgrade one building into another, you remove it from the map back to your player board, covering up your start of round income of workers or money, then take the upgraded building off your player mat and place it on the map where the original building was, thereby revealing new types of start of round income. A building upgrade can mean that you get one less worker at the start of the next round, but instead gain coins. You have to balance one with the other.

The power bowls are probably the most interesting and most famous mechanism in the game. You can only use power in the third bowl to take some special actions. So your power needs to be moved from bowl one into bowl two – and only when bowl one is empty can you move power from bowl two into bowl three. When you use the power from bowl three, it goes back to bowl one, meaning you have to work quite hard to move it back round again. It creates this lovely mechanism whereby you might be really powerful one turn, but then need a round or two before you have enough power again.

As all of this is going on, you also need to think about terraforming the land so you can spread out, because at the end of the game you get a fair number of points if you control the largest area. Cutting other players off is important, so you would think it’s best to go out on your lonesome to make this impossible. However, you need to be near other players to make upgrading to tradings posts cheaper, which is vital for most factions – only some are cash rich to make this less of a problem. So you have to be quick and expand before your opponents can, blocking them in, instead of the other way around.

Terra Mystica is a game I have learned to enjoy. I have been playing it a lot online on Yucata and not been doing too badly either. We even played it twice in one night the other week at our regular games night – which isn’t something I had ever expected to happen after our first couple of failed attempts when a friend of mine bought the game a few years ago.
It shows that sometimes you need to tweak how a game works, not by house ruling anything, but by looking at it from a different angle. It is funny how much the theme stopped me from understanding how to play Terra Mystica – and now that I have flipped it around in my head, I feel I am able to plan and follow a strategy, rather than stab in the dark.

So if you’re looking for a medium heavy area control game, then Terra Mystica will be for you. Ignore the theme and see it for what it truly is. Also make sure you play with variable VP rules, where the different factions start with different victory points – and ideally also add the variable turn order variant from the Fire & Ice expansion, which affects what happens when players pass at the end of their round.

Speaking of expansions, there are a few which you might want to look at once you have played Terra Mystica for a while. There is a more faction balanced game board as well, but you are probably going to enjoy the base game for quite a while before you will want to look for the additional options.