In my second review of online gaming platforms I look at Yucata, a free website that is all about a great, friendly community of people who love playing modern German-style tabletop games. It was started by Kay Wilke back in 2001, but since then he and many helpful people expanded the selection on the site into what it offers today – over 140 multi-player games for your enjoyment. 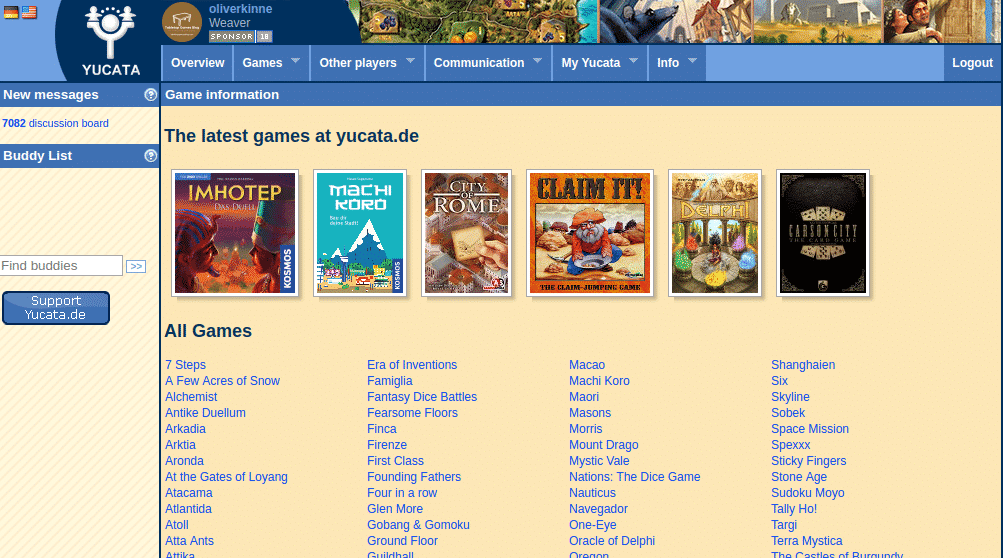 You can join the website for free, and even though it is on a German domain, it is open to everyone and offers English as an option, and the team behind Yucata, as well as many members, speak English. So you should have no problem finding your way around the site and getting help with any questions you might have.

All games on Yucata are asynchronous, meaning you take your turn and then pass, waiting for the next player to take their turn when they are ready. You can start games and specify what rough speed of turns you expect. I usually go for slow, meaning I expect players to take a turn about once every day or every two days. However, I often end up taking turns more frequently. I have even had games where everyone was taking turns live, and we finished a game in an hour or so. Most games will take days to finish though, as many players take turns once or twice a day.

I like that pace, because there is no pressure, but of course it means remembering your strategy and what actions people took becomes harder. Yucata caters for that, allowing you to take notes, and everyone’s actions are recorded, allowing you to rewind a game to see what has been happening since the start. It is really very well thought out and is the only way to play well and with purpose.

Games allows have a chat section, but I found it is rarely used. Most people just want to get on with playing the game, rather than having chats, but of course, when people do chat, it has always been in a positive way. I’ve never come across any abuse or negativity.

In fact, the site is really well designed and avoids the problem other sites have, where players can sometimes just disappear if they feel they’re losing, rather than play to the end. On Yucata, you can only ever play a turn on your oldest game. So you can just start a new game and play that, if you’re still due to take a turn on another game. You can still play multiple games simultaneously, of course, but if it’s your turn on a game, you can’t ignore it.

That means people would have to sign up to a new account if they wanted to abandon a game. That does happen, but it’s very rare. I’ve now played over 250 games and only had four games that were abandoned. Abandoned games get closed after so many days of inactivity, and it doesn’t stop you from playing other games if someone else abandons a game, as long as you’ve taken your turn. I think that works really well and is very clever.

The number of members is also quite large. You will find someone to play with quite easily, but bear in mind that most players will take turns maybe once or twice a day, maybe even less. However, the community is large enough to either find public invitations that you can join, or if you create your own invitation, it won’t be long until people join your game. You can also create private invitations, if you want to play with specific people only. I do this quite a lot with people from the games group, allowing us to play a wider range of games more often.

The selection of games is immense, including many popular titles. There is Automobiles, Carcassonne (to be more specific, it’s Hunters & Gatherers and South Seas), Imhotep, Jaipur, Machi Koro, Mystic Vale, Roll Through the Ages, Terra Mystica, The Castles of Burgundy, The Hanging Gardens, The Speicherstadt, Thurn and Taxis, Ulm, and many more. So you are likely to find a game you know and like amongst this huge list.
Every game comes with the relevant rules and there are often links to rules videos, so learning a new game shouldn’t be too much of an issue. Many people also don’t mind playing a game with someone who hasn’t played it before. So feel free to try something new. It’s a great opportunity to learn a new game without paying anything, and if you like it and want to play it during your games night, then you can buy it, knowing how to play it and being sure that it’s a good fit for your group.

The website is completely free and there is no advertising. It is constantly maintained and updated, with new games being added regularly. Kay looks after the website as a hobby, which is amazing. So if you want to help out, you can donate money to support the site, which gives you a badge that other players can see. I donated at the end of last year and will donate again later this year to support the site financially.

As I say, Yucata offer a large selection of games, a welcoming community and it is completely free. Have a look yourself, and if you like, you can find me on there under the handle oliverkinne. Feel free to invite me to a private game, if you want. It would be great to connect with more people. Looking forward to seeing you there.