In Project Dreamscape by Undine Studios your aim is to chain together as many of the same dream types as possible to get the most points. However, building those chains is a lot harder than it looks. Very quickly you realize that you have to plan a few cards in advance to make sure you get the longest chains, and if you’re not careful, you can easily undo all that great planning. Project Dreamscape first draws you into a false sense of being a light game, and then pounces and makes your head hurt as you try and find the best order in which to build your dream sequence. The illustrations by Julie Okahara are beautifully dreamlike, adding to the sense that there is a lot more to the game than you might think. 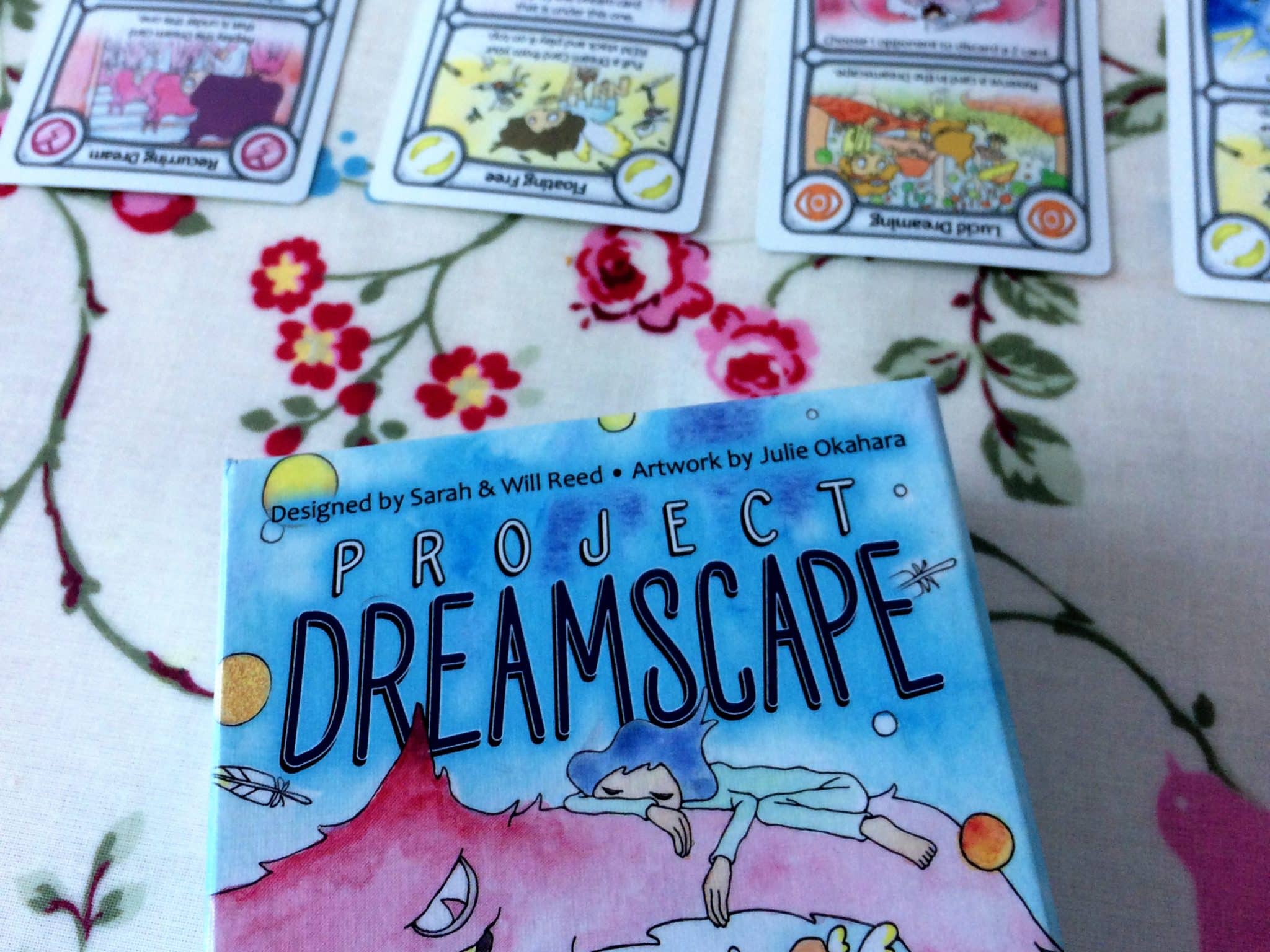 The game is simple enough. You start with a Z card, the currency in the game, and you can draw an additional Z card as the first action on your turn. With those two Z coins worth of money, you can buy dream cards from a river of five cards, with the highest being worth five coins and the lowest worth one. When you buy a card, you add it to your so-called REM pile, the stack of cards that make up your dream sequence and that give you points at the end of the game.

As you add the card, you have to choose and execute one of the two special actions that the card displays. These actions range from giving you extra money, pulling a card out of your REM stack to play it on top, in turn triggering its special action, copying another player’s top REM stack card, also triggering that action, rearranging the cards in the card river, thus making expensive cards cheaper, and so on.

The special actions correspond to a specific dream type, or colour, and it is those colours you’re trying to chain together for end game scoring. So once you have at least one card in your REM stack, you will try to buy more cards with the same colour to grow your chain. That’s not too much of an issue at first, because you only have two Z points to start with. However, every time it’s your turn, you have the option to draw another Z point, growing your pool of money, allowing you to buy more cards each turn. The Z points you spend on cards during your turn aren’t lost. You get them back at the end of your turn, and you’re allowed to buy as many cards as you can afford and as there are in the river of cards.

So as the game goes on, you can buy more cards, meaning you really have to think about what cards you buy in what order. Every card has two colours on it, and there is every possible colour combination in the game. So it shouldn’t be too hard to build chains of three, four or maybe five cards of the same colour, giving you a lot of points at the end.

The problem is, and this is what I think is the really interesting mechanism in this game, that each colour corresponds to a specific special action. Certain actions will be more in demand, meaning it will be harder to chain those colours together. So you might have started building a long chain of a certain colour, but then you really need the special action of a different colour, forcing you to break your chain. That in itself forces you think ahead and decide what card to buy when, and what cards to leave for the next player.

The game gets even more thinky though. Some of the card actions allow you to draw a card from your REM stack and play it on top, triggering that cards action. So you can take a card out of your carefully built chain of colours and ruin everything – or you can move a card into a much better position and improve your points. However, you do have to think carefully about what card you move to the top, or if you’re better off using a different card action. If played well, you can create a really powerful action combo, triggering the next card’s action, and the next and the next. Suddenly a single card can change the whole game state dramatically.

There is another card action that allows you to rearrange the cards in the central river of cards that you buy from. That means a card that originally cost five points can suddenly be moved to the one point slot, potentially allowing you to buy it as well. Again, you have to think carefully about what cards you buy and when to get the most benefit.

The card abilities are what create the real thinky element in this game. Suddenly you’re not just playing a version of Dominoes, but something that is much more akin to Star Realms, KeyForge or a similar card duelling game. In fact, the base set of cards already contains some player interaction, but the game comes with advanced dream types that increase the level of interaction, if you prefer that. These additional dream types allow you to swap another player’s top REM card with one from the central card pool, not only messing up their chain, but potentially allowing you to buy that card yourself.

However, it is up to you to add those in, depending on how much player interaction you want. The base dream types are already very good and are recommended for your first couple of games. It should make for a fun game, even if you don’t like player interaction – and if you do, then replace as many of the base types with the advanced types as you want.

As I mentioned before, the illustrations really fit the theme and make the game feel a little bit eerie. The cards are great quality and should last a very long time. The game itself isn’t quite a gateway game, but not too difficult to learn, and should also keep your “serious” gamer friends happy. It also come in a relatively small box, but all you really need to take is the deck of cards, making the whole game really portable.

So it’s highly recommended and a game that I will play a lot with my family and my games group. I suggest you take a closer look at it, because I think you will be surprised by how much this little game has to offer.

Just let me finish by saying that Sarah Reed is one of my Patreon supporters, but this has not influenced my view of the game. I was never asked me to make a review of the game or otherwise support it in any way. So I feel my opinion is completely my own, but I thought I’d let you know, so that you can make up your own mind.