GoodCritters by Arcane Wonders is an i-cut-you-choose sort of game with a twist. Players are members of a very successful gang of burglars and take turns to be the boss who divvies up the loot amongst everyone in whichever way they see fit. There is plenty of opportunity to be selfish or favour some players over others. Yet, it is up to the whole gang to vote on whether to accept the split or not. It’s a bit like being a pirate really – but that’s a different story. 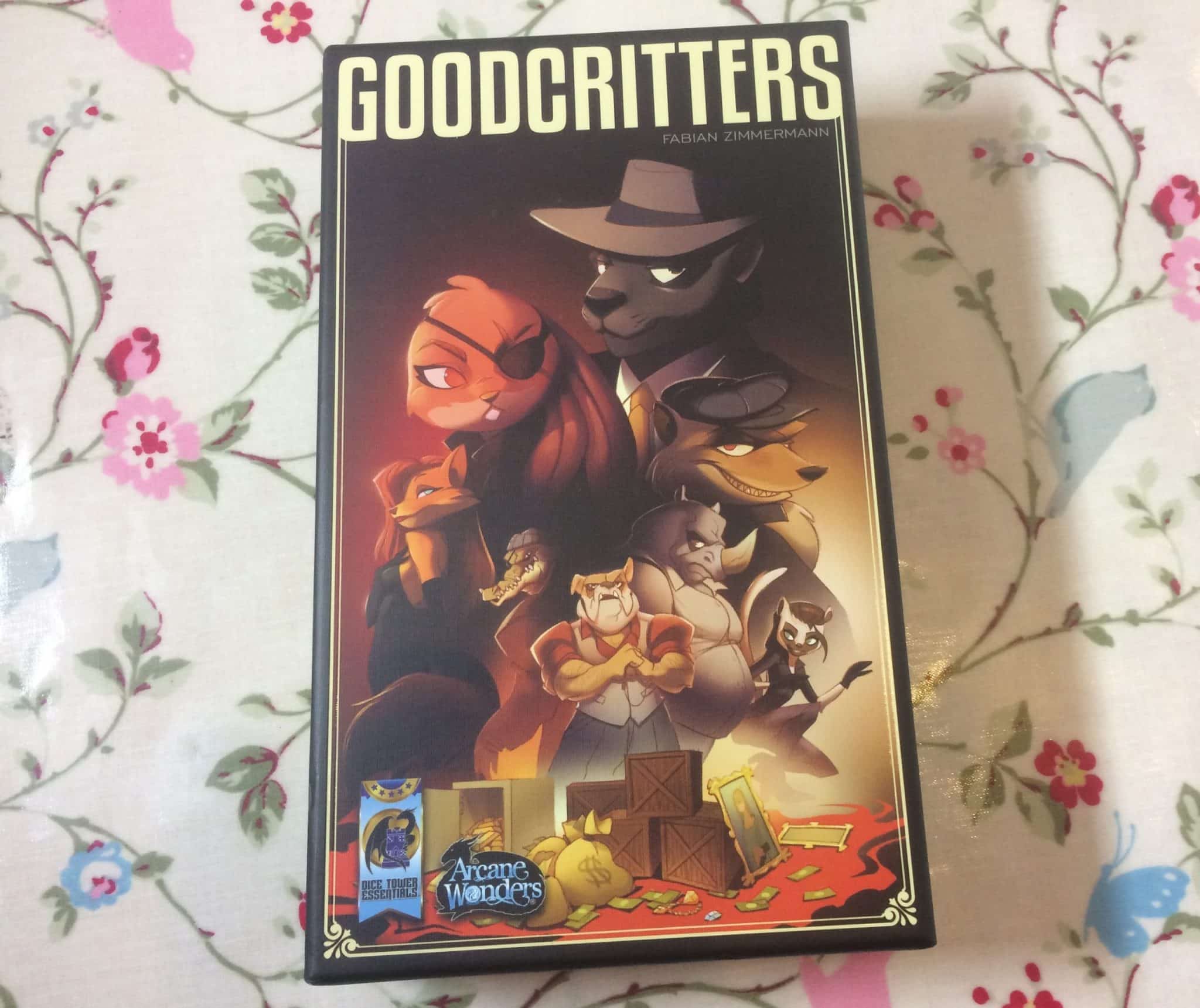 Of course, there is much more to it, than simply dividing loot and voting. After the boss has split the loot, everyone plays one of five cards face down – vote yes, vote no, skim, rob and guard. The first two are quite simple – you either agree with how the loot was split amongst players or not. When you skim, you basically draw a loot card from the deck, giving you an extra bonus – also quite straightforward. The last two are bit more tricky.

If you decide to rob, you need to place your player standee in front of the player you want to rob. If you succeed, you can draw on of that player’s loot cards at random. It’s a bit like skimming, but you reduce the loot of another player. However, players can protect themselves from robbing by playing their guard card. Not only does it protect them from being robbed, it actually switches the rob around. So instead of being robbed by another player, you now rob them instead.

Of course, nobody knows for sure what cards other players have played, and there will be a lot of pretending and posturing, as well as potential negotiating. It doesn’t end there though. Players are allowed to put their standee in front of another player, even if they have no intention of robbing that player, but want to force that player to play their guard card, just to protect themselves, while they play their skim card to get some extra loot for free. You can imagine how much bluffing these mechanisms create and how much player interaction there is.

A player who has got the smallest share of the loot, or maybe didn’t even get any loot, is tempted to vote against the boss’s decision, but chances are they will be targeted to be robbed by those players who feel they got a great deal from the boss. So it might be wiser to play their guard card instead of their vote no card. Yet, you can never be sure if the other players are bluffing and actually planning to skim or vote yes. You have to really make decisions based on your gut instinct.

The game doesn’t feel mean, because everyone is expected to get one over on everyone else. It’s all about trying to keep an eye on how much loot everyone has collected and form an alliance with another player until it’s time to get ahead. In fact, it feels like inevitable that players will gang up on each other.

If you’re not much of an outgoing person, you should still be comfortable with GoodCritters. The level of bluffing and pretending in this game can be catered to what you feel comfortable with. There is no need to say anything in fact – simply placing your standee in front of someone else can be enough bluffing. At the same time, if you like to really get into character, you will also love this game.

There is one last twist in this game that I think creates the crucial element in this game. The only thing the boss has to do is make sure all loot cards are given out to players. However, there is nothing stopping the boss from taking all the loot for themselves, or giving all to one other player, or splitting it between themselves and only one other – it’s really up to them. There is no need to split it evenly, even though that might be advisable at some point in the game, just to keep others sweet. However, it’s also a very valid strategy to form an alliance with one other player and divvy up the loot with them, as long as you can ensure that the other players don’t vote against you and your ally.

As you can see, you do have to keep making decisions about what card to play and you can never be certain how it will turn out. However, it is great fun to see how everyone forms alliances, gangs up on each other and tries to get the most loot before the fuzz arrives and the game ends.

GoodCritters is beautifully illustrated and the components are of really good quality. There are dozens upon dozens of loot cards with different illustrations, and there are eight different characters that should allow everyone to find one they like.

It is a game that is very quick to learn and play. It is very easy to get at least one round in at the beginning or the end of your games night, and chances are you want to play it at least twice. I can definitely recommend GoodCritters to anyone who want to play a light game that is a lot of fun. It’s also a great gateway game in my view, so great to try on friends and family who aren’t much into tabletop games otherwise.