For some of us, not being able to see friends or family, or anyone else for that matter, in person is becoming a distant memory. I appreciate that for some of you, it’s still very much the present, depending on where you are in the world or the health of the people you would otherwise meet, you live with or your own. In this article, I want to write about how it feels to be playing board games face-to-face with other people, as this has now been possible for me for quite some time. 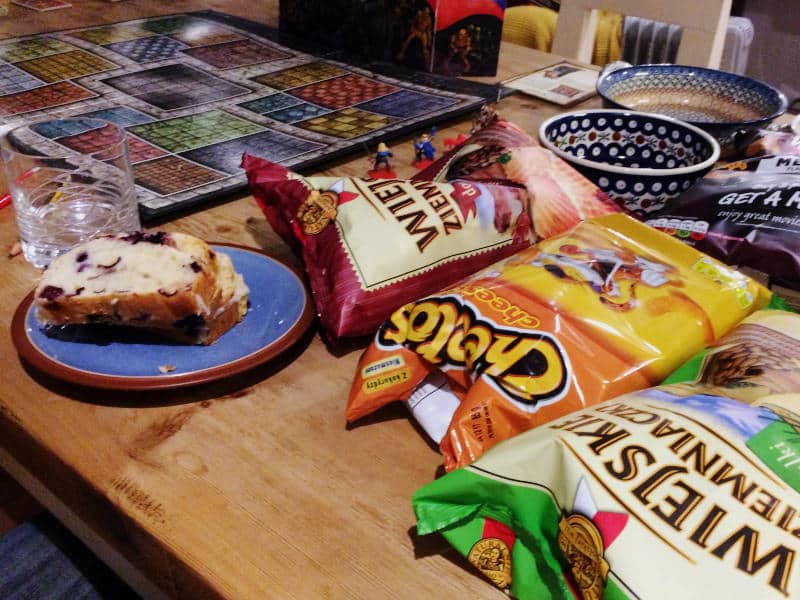 Snacks at an in person games night might not be to everyone’s taste.

My initial reaction is that being able to meet up with friends again is wonderful. Just having a chat with someone there right next to you is so much better than speaking to them via phone, chat or other remote means. On the whole, the social element of spending time with people in person is so precious and very important to me.

The most obvious benefit of being able to see someone is that you can also see their facial expressions and body language. Your interaction with them suddenly becomes so much richer than it was before. You can see whether they’re happy, distracted or nervous. Their verbal responses are underlined by the twinkle in their eyes, the frown on their brow or how their shoulders are slumped. In fact, even without any verbal communication at all, there is so much that people convey with their eyes, mouth and many other parts of their body.

Board Games in Person

That is also true for playing board games with people, of course. Hearing someone complaining about you taking the worker space they so desperately needed over voice chat is one thing. Seeing in their faces how they actually feel about it on a deeper level is quite another. Banter can be interpreted in so many ways. Even though it’s often meant in jest, it sometimes hits the mark. So when someone goes quiet on voice chat, you have no idea that they were offended by what you said. Being able to see that your throwaway comment hit a nerve allows you to apologize or respond in some other way.

There are games where reading someone else’s body language can give you clues as to what they might be planning and I’m not even talking about bluffing games. Just looking at the other people around the table after you have finished your turn is a good way of gauging if you might have interfered with their plans or not. When someone’s facial expression or general demeanour changes as they draw new cards or look at their dice results can speak volumes.

Of course, sometimes having too much social interaction can be overwhelming. There is sometimes just too much stimulus to cope with and then you might wish you went back to playing games with friends online.

There is another benefit of playing online: geographical distance. When my games group went online, we lost a player. They spent all day in front of a screen and didn’t want to spend even more time online playing games. However, by moving our games night online, we made a new friend, which otherwise wouldn’t have been possible. That new player introduced us to new games that I don’t think we would have otherwise tried ourselves. So online games allow you to play more board games with more people.

Actually, playing online is something I do a lot. You can find me on Yucata as oliverkinne, if you want to play a game with me there. The thing is though, on that platform, I don’t really play any new-to-me games. I have previously talked about learning games using their digital versions and how that can be a really good way of trying out new games, but being taught by a real person, whether that’s via voice chat or in person, is so much better. So when it comes to Yucata, I stick to the same handful of games. At the same time though, I can play this handful of games a lot more. In fact, I usually have several games going in parallel.

Online games are also usually much cheaper than their physical versions. Often you can play them for free, at least as part of a trial. That way you can try before you buy. It is something I highly recommend, even though I don’t follow my own advice here. It’s made even easier, because many digital implementations have AIs. So you can try the game yourself and don’t need to arrange a time to play with your friends.

I don’t want to focus too much on the games themselves, but I do want to mention that playing a physical game has a huge tactile element to it. That can make a huge difference to the whole game experience. There is also a visual element. Some games have such amazing table presence and I’m a very visual person. Combine the tactility and visual impact and you get a huge bonus for physical games.

Of course, there is also a touchy-feely element to playing games in person. Even if you don’t hug them or shake their hand, the physical presence of someone around the table has an impact. It’s not necessarily tactile as such, but it’s certainly different to hearing someone on voice chat.

How do you feel about playing games in person, assuming you are able to? If you’re still unable to meet up, what do you miss about playing face-to-face? What do you not like about spending time with people in person? I would love to hear how you feel about in-person games. So please leave your thoughts and experiences in the comments below.