You will never, in your life, see cats co-operate to create gravity-defying sculptures. It just doesn’t happen. Cats tolerating each other is about as far as it gets. However, that’s exactly what happens in this latest mint tin dexterity game. I can already hear you asking me: “Are you Kittin?” by Alley Cat Games. 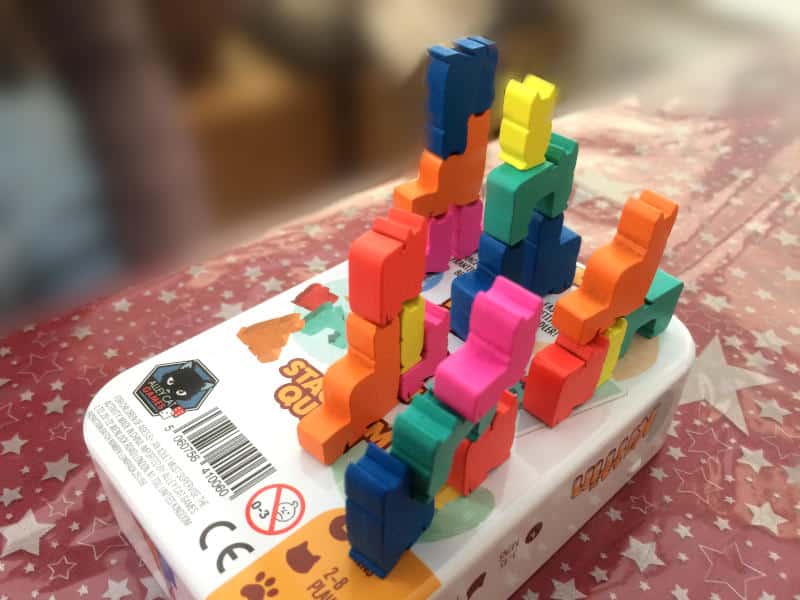 When custom wooden cat meeples collide with the fun of stacking them as quickly as possible and everything is packaged in a mint tin, then we’re definitely on the right track. No, this game isn’t for everyone, but then no game ever is. However, if you love quick, fun, dexterity games with beautiful components that you can easily take with you anywhere, then this game is for you.

Sure, the theme is rather weird, but at the end of the day, the shapes you can create with them is rather cool. There are six different cat shapes, from a very small yellow kitten to a large orange cat. Many of them fit together a bit like puzzle pieces. They are all quite tactile and even before you start playing the game, everyone will have picked some up and started to build their own cat tower. It’s really quite irresistible. Mind you, when that happens, you know everyone will have fun.

The game is really quick to teach, because all you do is flip over the top card from the deck and reveal a cat tower that everyone has to build in front of them as quickly as possible. The first to do so shouts “Meow!” and the round ends. If the cat tower matches the picture, the player gets the card. If it’s wrong, or if someone’s tower collapses, they’re out for this round and the other players continue. First player to get three cards wins the game. That’s it.

The fun comes from competing with the other players. The thing is, you don’t have your own cat shapes in front of you, but everyone has to draw from a shared pool of cat meeples in the centre of the table, so a bit of shoving and pushing is unavoidable. The pressure of trying to stack the pieces correctly, but quickly, without knocking anything over, is what creates the tension and when you’re the first to shout “Meow!” that tension is released and everyone laughs.

As the pieces are so much fun to play with and rounds are over so quickly, it doesn’t matter who wins. You just keep playing over and over again. When we played, we quickly made up our own variant, where we kept each cat tower standing and had to build the next one to one side, making it a bit harder to avoid knocking anything over. Of course, playing like that, you quickly run out of pieces, depending on what cards you draw and how many players there are, but we had fun.

I think, that’s the main goal of any game, but Kittin really excels at this. As I say, people will start building towers before the game even begins and will continue to do so afterwards or in between rounds. You just want to play with the custom cat meeples and see if you can build the highest tower, or the best balancing tower. It becomes very addictive.

One thing I do want to mention though is that I had expected the cat meeples to be a bit more substantial. They feel very light, especially if you compare them to wooden meeples from Carcassonne or similar games. The wood is probably more like balsa wood, but other than being a bit of a surprise, it doesn’t actually detract from the huge enjoyment you get from playing Kittin.

Also, the box says that you can play 2 to 8 players, but when you check the rulebook, it says it’s 2 to 4, then either 6 or 8 players, but if you play with 6 or 8, you have to play in teams. I’m not sure how well playing in teams works, which is why my review say it’s 2 to 4 players. If you do have more than 4, maybe get a second copy of Kittin, so everyone can play at the same time.

Kittin is the sort of game that’s so easy to take with you, as it comes in a sturdy, standard-sized mint tin. It plays very quickly, so is ideal for when you’re out and about, maybe waiting for food (when we can go out again) or while waiting for others to arrive for games night.

It always surprises me how such very simple games create so much fun. Alley Cat Games has done a great job here and Kittin is a game that I’m going to play a lot for some time to come.