I could hear screeching tyres and gunshots coming from video game machines, the melodic sounds of fruit machines and some general hubbub of laughter, talking and other noise. I was standing at one end of the air hockey table, with my opponent on the other side. Yet, even though it felt like we were at some sort of amusement arcade, we were both at home and hadn’t left the house. We were just about to play a game of Klask. 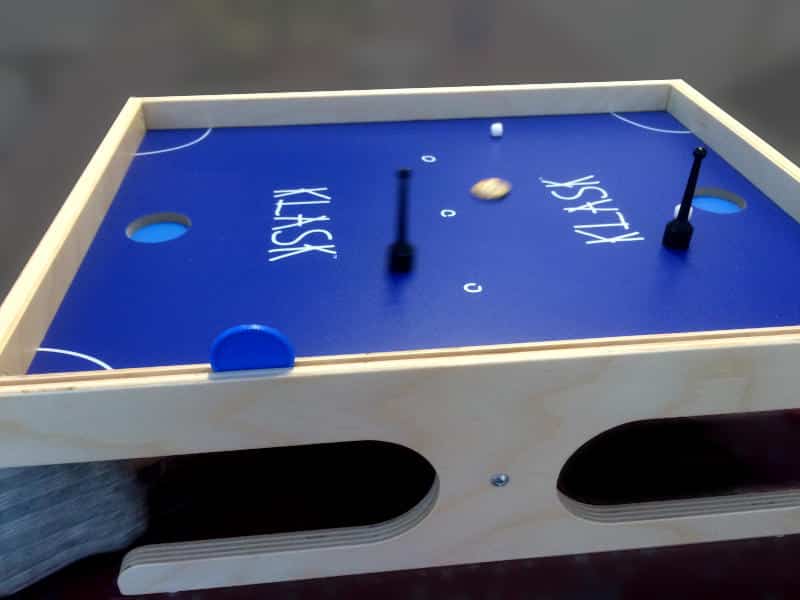 I know, you’re probably thinking that I’m stretching the meaning of tabletop game, but as Klask clearly sits on top of a table and it’s a game, I think it fits perfectly. It’s a wonderful game of fast reflexes, a good eye and just having lots of fun. If you have ever played air hockey, then you will immediately understand how Klask works.

The aim of the game is to use your striker to manoeuvre a little ball into the opponent’s goal, which is a small, circular indentation at their end of the table. It’s not quite that easy though, as there are many ways to lose yourself, before you get anywhere near scoring yourself. If you ever lose control of your striker, or when your striker ends up in your own goal circle, or when you pick up two of the three small “biscuits”, as the white obstacles are called in the game, your opponent scores instead.

Also, you have a magnetic peg that you hold underneath the table and that controls the plastic striker on top of the table. If you’re too forceful, the striker can easily come off and fly across the table, losing you one point. Also, because the “biscuits” are magnetic too, they can easily be picked up by your striker. It’s really quite difficult to do it right and try and score a goal while avoiding losing a point yourself.

In fact, a good strategy to score is nudging the biscuits into your opponent’s half of the table, making it harder for them to manoeuvre and making it more likely that they pick up two biscuits and lose a point.

Now, I said that Klask is about having fun and of course it is, but there are a lot of people who do take it very seriously, with competitions being held in many countries around the world. Yet, when I played it with my wife and daughter, we quickly decided to just enjoy it and not take it too seriously.

There is one thing we decide to change though. The plastic ball that you’re supposed to use is just not practical. Unless you have a completely level table, the ball constantly rolls away, making it very hard to play the game. So we decided to replace it with a 1 Pound coin, which functions more like a puck. It’s a good size and weight and it slides nicely across the smooth surface, so is a perfect replacement for casual play.

Other than that, Klask is a really high quality product. The table is heavy and sturdy, with nice rubber feet that keep it in place as you play. The magnets are amazingly strong and everything feels really good. It’s definitely worth the money, if you want to experience air hockey at home without having to buy a full-size table. Klask is small enough to fit onto any kitchen table or even coffee table.

I don’t think there is much else to say about the game. It’s a lot fun and the closest you get to feeling like you’ve gone to your local amusement arcade without actually leaving the house.