“…crisis on Wall Street as Lehman totters towards…” – “…worries could wreak havoc on markets…” – “…banking giants rush to raise capital…” – “…markets in disarray as lending locks up…” – “…sweeping plan to fight crisis…” – “…vast bailout…” – I switched off the television. The news wasn’t good and it was clear what we had to do to stop the world markets from collapse. It was time for some Q.E. by BoardGameTables.com. 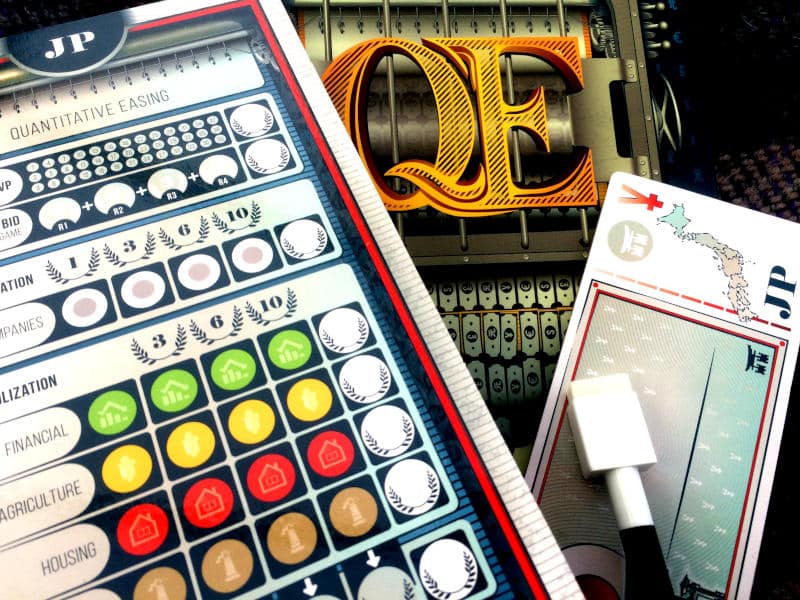 Set against the background of the 2008 banking crisis, in Q.E. you take on the role of a national government trying to avoid the collapse of global markets. You try to inject money into the economy by bidding for companies from around the world. There are no limits as your central bank can print as much money as you need. You basically have a blank cheque to pay as much as you want for the most valuable companies that come up for auction.

Of course, the theme is really only secondary here. The bids are not for specific companies, but for tokens that represent a combination of country, industry type and a victory point value. When you win a token, you decide which of the three to score. If a token is for the country you represent, then you get a certain number of victory points, while industry types give you more points the more you have of each or the more different ones you have, and the victory point values themselves range from 1 to 4, where 4 is a fairly decent amount of points, but 1 probably not worth very much.

The scoring part itself is actually relatively straightforward. It’s usually obvious which of the three different properties of a token you want to use for scoring. It’s rare that you struggle to decide what to tick off on your dry-erase board.

It’s the bidding that makes this game so interesting and fun. Every round a different player is the auctioneer, which basically goes clockwise around the table. The auctioneer draws the next token and reveals it to everyone, then openly writes down a starting bid. The other players now have to decide how much the token is worth for themselves, writing down their bid secretly and passing it to the auctioneer. Once all bids have been submitted, the auctioneer reveals who made the highest bid, but doesn’t say what the highest bid actually is, unless nobody bid higher than the auctioneer themselves of course. The highest bidder gets the token to add to their score.

Now, as I mentioned at the beginning, there are no limits in the game. Everyone can bid whatever they want. If you really want a certain token, or really want to prevent someone else from getting that token, you can bid an incredibly high amount to ensure you win the bid. The problem is, at the end of the game, the person who bid the most in total is out of the game. So you do have to keep track of what’s been bid so far by everyone to decide how high you can go without pushing yourself over the edge.

It becomes an interesting tool in the game actually. You can intentionally bid a stupidly high amount to get a valuable token, which can open up the floor for others to also bid high, creating a sudden spike in bids from everyone, as long as you’re the auctioneer, so people can see how high you’ve gone.

Q.E. is a really exciting blind bidding game, with a small element of social deduction, as you’re trying to work out how much others have bid to win the company token. You’re never exactly sure how high you can go, but you also know that you can really push others into bidding higher and get away with a low bid. The more you play Q.E. with the same people, the more the game will change.