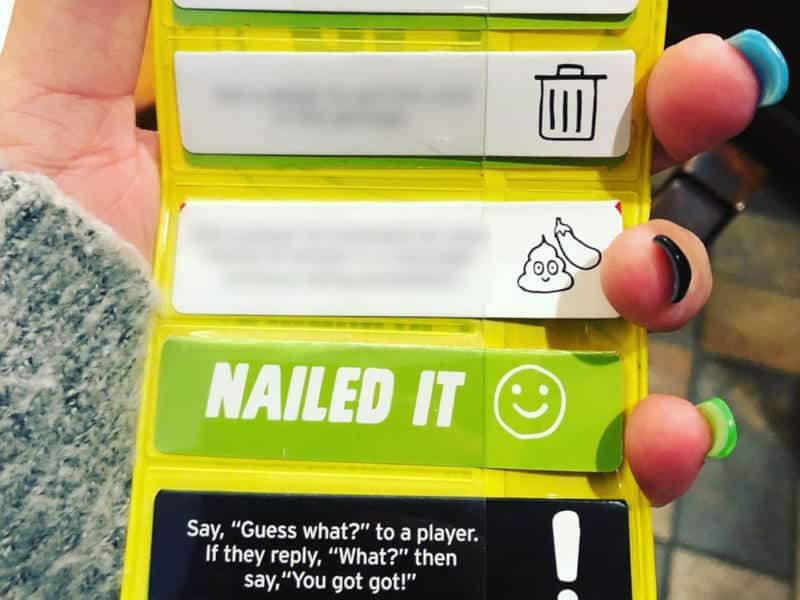 I know that many of you probably wouldn’t classify Don’t Get Got as a board game. It’s technically not even a tabletop game, because it doesn’t require a table or other surface to play. Yet, it’s listed on Board Game Geek, so I would argue it qualifies as a board game – and even if it wasn’t listed, I would still review it on my blog.

So with that out of the way, let’s delve right in. As the name suggests, Don’t Get Got is a game where you’re trying to trick your friends into doing something and when you succeed, you’ve completed your mission. Complete three missions and you win.

These missions cover a wide range of things, from the relatively benign to the rather more ludicrous. The basic mission that everyone gets is to ask a player “Guess what?” and if they answer with “What?”, you’re successful. Other missions require you to be more clever, but I don’t really want to spoil any of them for you. Suffice it to say that the game comes with dozens upon dozens of mission cards, so you can easily play the game with dozens of people all at the same time and you could play it several times and still not run out of missions. The options are vast.

You can play it at home or while you’re out and about. Everyone just needs their wallet of missions, which easily fits into your back pocket, and off you go. You can either play until someone has successfully finished three of their five missions or until a certain deadline – or a combination of both. You can play it once or multiple times. It’s an ideal game to play while you’re on holiday or at a convention or over a weekend – or just for a single day.

The thing is, you think it’s going to be easy, but it’s not. Of course, you keep your five missions a secret, except one of them which everyone has in their repertoire, but even so, you’ll find it hard to get someone. When we played it, everyone was immediately on edge. None of us wanted to answer anyone else’s questions or do what someone else asked us to do.

Trying to get someone to help you with something, which was a genuine request and not an attempt to complete a mission, was virtually impossible. Nobody trusted anyone else. It was a strange feeling.

The game allows you to call someone out, if you suspect them of trying to complete one of their missions. If you’re correct, they have to be honest and show you that mission and it’s considered a failure and cannot be attempted again.

However, that meant I ended up calling out my daughter every time she asked me something. Rather than not saying anything I was constantly saying: “You’re trying to trick me. It’s one of your missions.” It was becoming silly.

Yet, my daughter still managed to finish three missions. After all, eventually you forget about the game and that’s the time to pounce – and it’s that timing that makes this game so much fun.

At first you think that the game is going to be boring, because people will either not talk or just continuously call each other out. However, the reality is that you do relax into it and eventually forget that you’re still playing. If you time it right, you will get the other person in the end, especially if you play over several days.

The classic moment was first thing in the morning when my daughter seemed to have just woken up, but managed to get my wife and complete her third mission and win the game. We didn’t expect her to be playing so early, but she was spot on and exploited the moment.

It’s those moments that Don’t Get Got creates, that you will remember – and that’s exactly what many of us like about playing games: the moments you remember. It’s what makes this game so much fun, as well as the psychology behind it all, how everyone becomes cagey and changes their behaviour. It’s a really interesting and fun game that I highly recommend you try out for yourself. It’s a game you can play with friends and family alike.