“Silence!” you shout at the two imps sitting opposite you in the surveillance van. “It’s time you two pilferers sneak into the factory and steal some tasty doughnuts. It’ll be absolutely pitch black in there, so I’ll be watching you from here and tell you which direction to go. Remember: north, east, south or west. Just make sure you keep going until you grab a doughnut or hit a wall. Oh, and if you come across anyone from a rival gang, just grab one of their doughnuts as you bump into them. All right?” The two imps reply with a loud and clear “Yes, sir!” and shuffle out of the van. Moments later, you spot them on the security cameras. Good. You’re ready to start the Doughnut Dash by The Dark Imp. 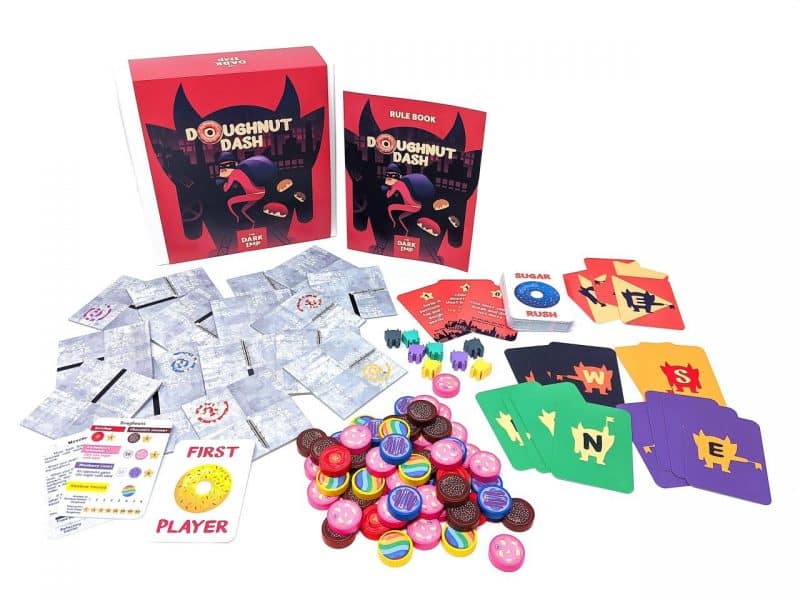 I think from the start it’s clear that this game is aimed at all the family. The setting of a doughnut factory and the theme of stealing doughnuts will appeal to people of all ages. The rules are also kept really simple, even though the rulebook is relatively long, but that’s not unusual for the concept it describes. However, in principle every player, all at the same time, chooses a direction from the compass and then they move their doughnut thieves in that direction until they either pick up a doughnut or hit a wall.

Sure, there are things like reflective walls, which thieves bounce off of and continue to move in the opposite direction, there are wormholes that teleport a thief to the relevant exit space, plus the 8×8 space factory wraps around, so as you hit an edge, you exit the factory there and re-enter it on the opposite side. Also, different doughnuts score differently and the way you choose and play your compass directions works in a certain way, and the rulebook has to explain all that, which means it’s more of a booklet with lots of illustrations rather than a leaflet.

However, at the base of it all you really do is work out which direction you want your thieves to move so they pick up the best doughnuts without manoeuvering themselves into a corner or putting themselves in reach of the rival gang, who can steal your doughnuts. So the rules are really pretty simple.

Yet, like with so many games of this ilk, the simple rules create a really complex game, where you need to think a few steps ahead to ensure you can pick up the most valuable doughnuts with the cards that you have.

You could easily play Doughnut Dash with very little planning and have a great time and get a great score, which is why the game is also really suitable for players with less experience of modern board games.

However, you can also play Doughnut Dash at a much more strategic level. The game is almost a perfect information game, allowing you to plan many steps ahead. It’s often obvious what the others will do on their turn and you know exactly which direction cards they have to play, so you could really just math everything out if you wanted.

Of course, it’s not that simple. For one, the other players know that you know what they know and will act accordingly, surprising you with actions that you hadn’t counted on.

Also, there are so-called Sugar Rush cards in the game, which basically give you rule breaking actions and which you keep hidden from the other players. They make it much harder for you to predict what might happen next. They will allow you to send your thieves in different directions or change the layout of the factory floor by rotating the 2×2 tiles.

Yet, Sugar Rush cards are also worth victory points if you still have them in your hand at the end of the game, so you do have to consider whether it’s really worth playing them for their action or whether you’re better off keeping them for points.

The Dark Imp has done a great job with the game. Every game is different and it really changes with different numbers of players and different player groups. I have played games that were quick and fun and mainly consisted of trying to snatch doughnuts from each other, as well as games where every turn was carefully considered and players’ Sugar Rush actions used to great effect.

The components in Doughnut Dash are amazing as well. You can see that in my unboxing video for BuzzleBox, which is a great collection of games, which includes Doughnut Dash. The sixteen factory tiles which make up the game board are thick and provide a lot of variability. The doughnuts are represented by chunky wooden discs and colourful stickers. The cards are really thick and seem very durable – no sleeving needed.

I think it’s a great production and will offer you a lot of fun gameplay with the family, as well as some strategic thinking for those people who prefer that sort of thing.

Here is the unboxing for BuzzleBox which contains many fun games, including Doughnut Dash.