After finishing my shift in the press room at the local newspaper, I had returned home. As I entered the apartment block’s communal hallway and went over to collect my post, I saw that someone had changed the padlock on my letterbox. I knew that my own padlock had never been very secure, and I always expected someone to cut it with a bolt cutter to steal my post. However, I never thought anybody would go through the trouble of replacing my own lock with theirs, but clearly someone had done just that. Then I saw a sticky note written by my friend Henry. It seemed that I had to solve a little puzzle to work out the code of the new padlock, which, unbeknownst to me at the time, was going to lead me down a rabbit hole of puzzles of ever-increasing difficulty which would eventually help me uncover a major conspiracy in Escape Room Puzzles by Carlton Books. 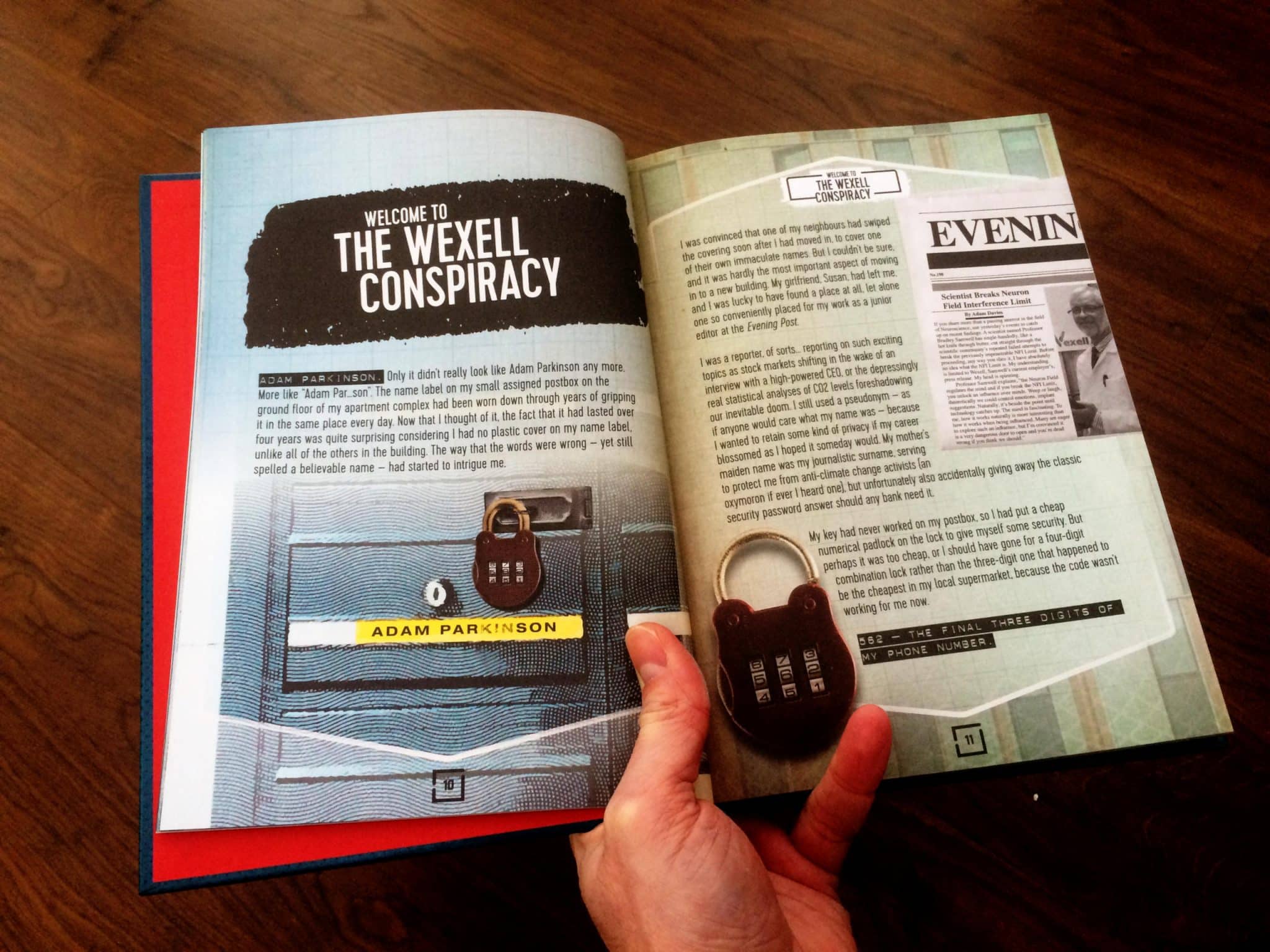 All right, that’s not exactly how the book begins, but you get the idea. Here is an escape room game… well… not in a box, but in a book. The introduction clearly explains what to expect and how the book works, the sort of clues you’ll be looking for and when you need to stop reading and start solving the puzzle. The first situation is relatively straightforward and even though I didn’t quite solve it fully, I got it mostly right. I’m just not a great escape room player, but if you’re more experienced, you’ll probably solve this one with ease.

As you would expect, subsequent puzzles get more involved and difficult. In fact, to me it felt like the level was ramped up quite quickly – too quickly really. That meant that I soon got lost in the puzzles and had to refer to the solutions that the book provides at the back to be able to proceed. That’s all down to me and my experience with escape rooms though. If you have more experience, and probably more patience than me, you will solve the puzzles with no or only a little help.

The book gives different levels of help at the back, if you need it – including the full solutions, which I had to refer to. So you can choose how you want to approach the story and how much time you want to spend on each puzzle. Sure, the book does sometimes gives you a time limit, but of course, there is no real limit.

Speaking of story, it is actually pretty well written. Don’t expect the quality of a crime novel, but for what this book represents, it’s definitely enjoyable to read. Sure, the story does sometimes take certain, slightly unbelievable turns, purely to put your character into the next trap that you have to get out of. However, that’s the whole point of an escape room of course. You don’t want to solve a puzzle, then read several chapters of the story before you can try your hand on the next one.

The book does consist of puzzles that require you to cut, fold or otherwise manipulate the pages, but the introduction explains that you are very welcome to photocopy the required pages, instead of damaging the book itself. That way you can easily give it to someone else once you’ve completed all the challenges – or have given up early.

So, this book isn’t for me – but then, escape room style puzzles are just not my thing. However, if you’ve enjoyed other escape room games, then I think you will really enjoy Escape Room Puzzles. As it is a book, you can easily bring it with you and while away some time on a train or a bus – or even in a waiting room. Just don’t forget to bring your scissors, which you will need for some of the puzzles.