There is absolute silence and the flickering candles cast eerie shadows of the four people sitting around the table. Everyone has one hand on the table and moves their gaze from face to face, trying to lock onto the thoughts that waft through the other person’s mind. The tension is palpable and the air is thick. There is a faint sound of ticking, as if from a grandfather clock, but it’s not real. It’s in everyone’s head. Yet, it’s not a single clock, but a jumbled rhythm as each player counts down at their own frequency. Then, slowly, everyone withdraws their hand and the game begins. It’s time to get into synch as the game of The Mind Extreme by Nürnberger-Spielkarten-Verlag begins. 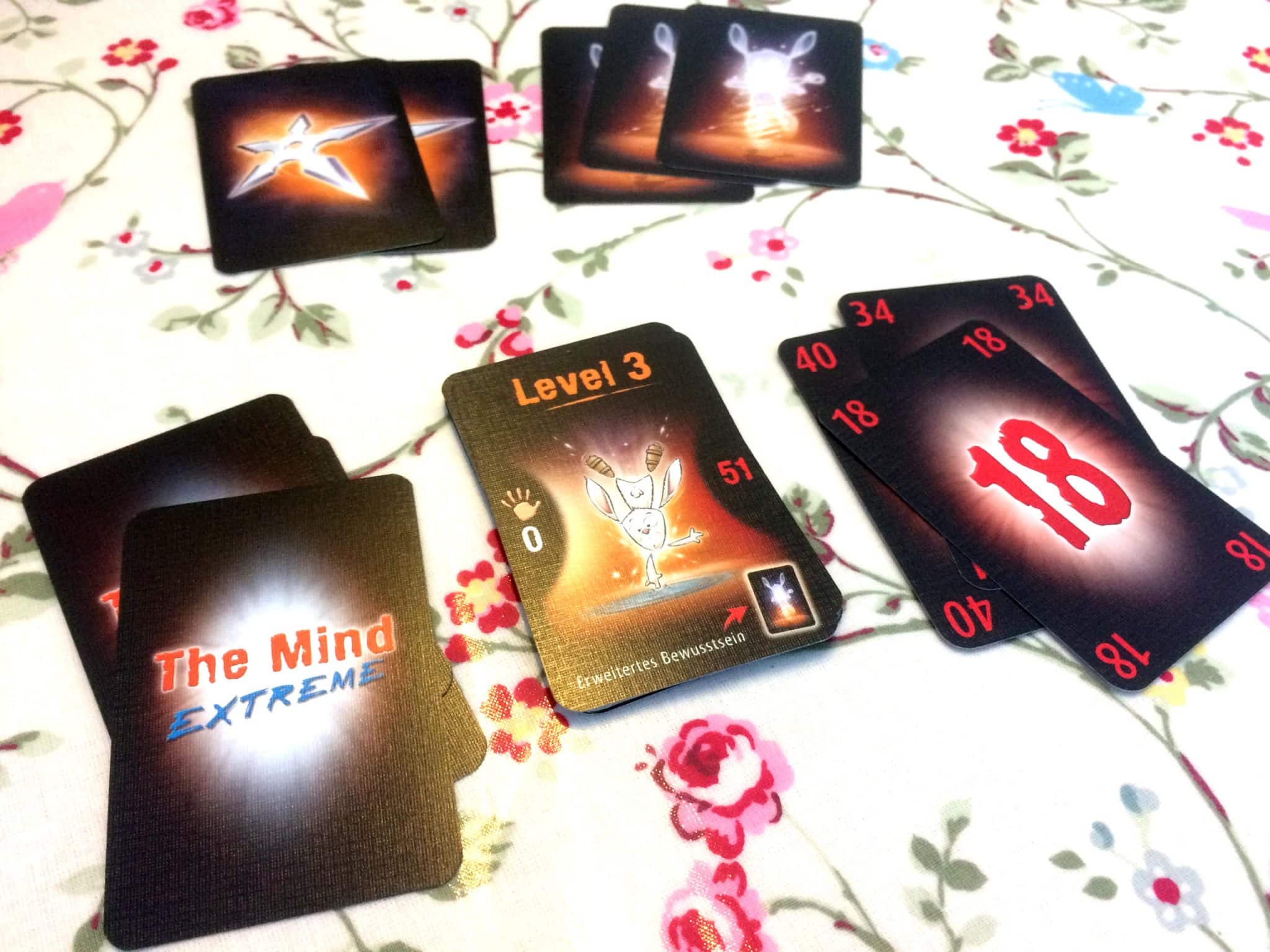 Yes, it is the successor to The Mind, a game that I have talked about a lot and that has given my family and friends a lot of laughter and fun. The Mind Extreme has all the same rules as its predecessor, so if you know how to play one, you can play the other. They’re both completely independent games.

The Mind Extreme has a few extras though, as the title suggests. Now you have two decks of numbered cards, each going from 1 to 50. So there are still 100 cards in total, but split between a deck of white cards and a deck of red cards. Your aim as a group is to play all the white cards that have been dealt out amongst the players in ascending order. The red cards work very much the same, except that you have to play them in descending order, which means from 50 downwards.

So now you have two stacks of cards, and to help you remember which cards go where, the deck of level cards now goes into the middle of the table and on it has printed a red 51 on one side and a white 0 on the other. So it’s easy to know where to play your cards, irrespective of where you sit around the table.

Already you have an interesting twist. You have to focus on two sequences of numbers now and whereas in The Mind you were able to slowly take a card from your hand and wave it in the air to indicate that you’re thinking about playing it, allowing the rest of your team to decide if they’d better get their card in before you, in The Mind Extreme this technique no longer works because nobody will know if your next card has a white or a red number on it.

The Mind Extreme adds another twist to make gameplay even harder. Some levels force you to play one, or both, of the sequences face down. So you may still be able to see what white number someone has played, but all red numbers need to be played face down onto the red stack, which means nobody knows what was played or whether their red card should be played next. Only at the end of the round will you reveal how well you did as a team – and for each mistake you lose a life.

Not knowing when to play can be very frustrating, but when you reveal the stack at the end and find that every card was played correctly, even numbers that are close together, you feel amazing and get a real sense of satisfaction and joy. That is amplified for levels where both stacks have to be played face down, and of course, if you suddenly lose several lives and therefore the game, the feeling of disappointment is amplified in the same way.

The feeling of having no control due to this new rule is not going to be for everyone, and I must admit it’s not my favourite part of the game either, even though it’s definitely an interesting idea. It leads to players trying to find a better way of playing the cards in a more predictable way, and the solution is to only play one type of cards first, before working on the other. You could easily agree among yourselves that you will always play all white cards first for example, and then start with the red ones.

The rules forbid this behaviour, but I really don’t know how you could enforce it. In fact, there is nothing in the rules that indicates any penalty for finishing one stack of cards before starting the other. After all, early in a game of The Mind Extreme, when players only have one or two cards in their hands, they could easily all be of one colour. It is really up to the group to follow this rule and mix things up.

Yet, it’s this rule that annoys me a lot. I can see that it is needed, because if everyone plays only one colour first, and then the other, you’re all really just playing The Mind, be it that you play two rounds of The Mind one after the other on the same level. However, there is no way of enforcing it, let alone any penalty.

Overall, The Mind Extreme feels like hard work. You have to remember to look at the level card to check when you have to play cards face down and which ones. You also have to focus on two number sequences at once, which feels more draining. The Mind Extreme has turned the brilliant game that is The Mind into a lot less fun and a lot more work, without providing sufficiently bigger rewards.

So if I had to choose between the two games, The Mind would get my vote every time. It is just so much lighter and therefore so much more fun than The Mind Extreme. Of course, if The Mind had never existed and The Mind Extreme was the only option, I would still play it happily.