When struggling gramophone salesman Barry discovers a not-so-secret secret lab (I recommend you watch the trailer on Halfbrick‘s website) which has developed a number of different and increasingly crazy jetpacks, his life changes. He starts with a basic jetpack and flies through the various rooms of the lab to avoid obstacles and find the next and better jetpack to try out for himself. A lot of frantic horizontally scrolling fun ensues, which the boardgame conversion of Jetpack Joyride by Lucky Duck Games tries to reproduce on your dining room table. 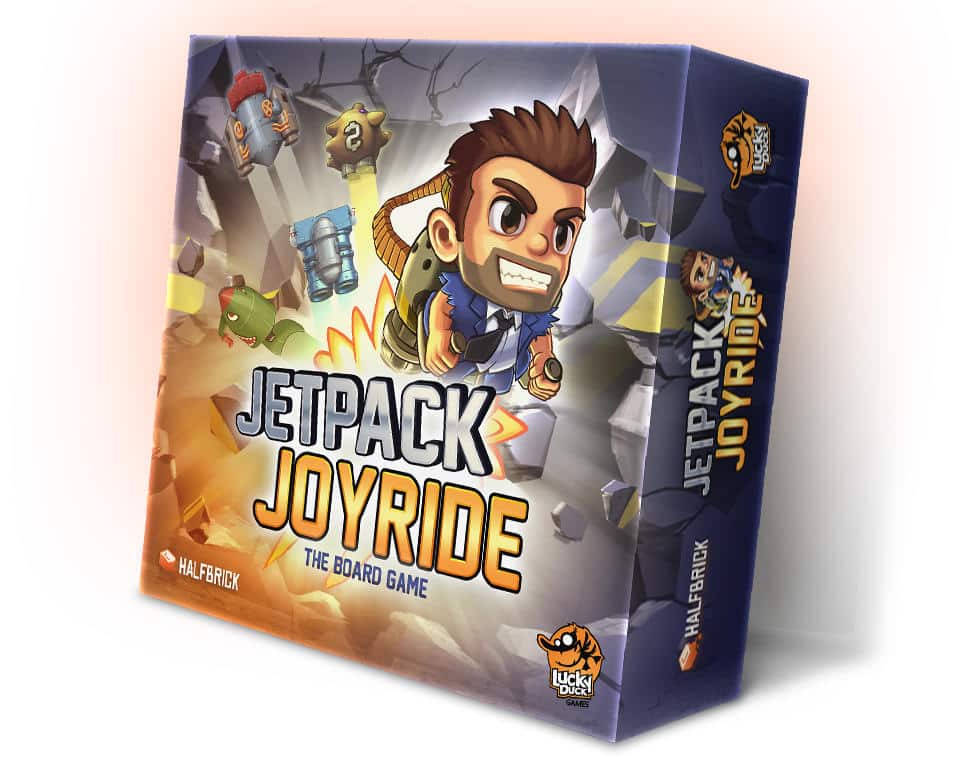 The background story is crazy enough and the app version is frantic, and emulating a horizontally scrolling adventure as a tabletop game isn’t easy. What Lucky Duck Games has come up with comes very close though. To recreate the feeling of speed and quick reactions, they chose to make a realtime game, where all players select polynomial tiles from a central pool to place on their individual game boards, trying to make a path through the lab all the while avoiding obstacles and collecting coins. As soon as one player has completed their path, the round immediately ends.

So your thinking time is limited by everyone else’s desire to finish first and get the most points. Yet, you don’t just want to go from one end to the other and crash into obstacles. You want to create a safe path that also collects the most coins, because coins make points – and obstacles lose points. At the same time, there are three shared objectives each round, which give you stars, and stars make more points, but the objectives want you to reroute your safe path in a more precarious way, which isn’t always possible.

That in itself is crazy enough, but the problem of finding your most optimal way through the lab is made harder, because there are only so many different types of polynomial tiles, and everyone is grabbing them as quickly as they dare. So it’s easy to work yourself into a corner and having to backtrack, which means others can now grab your tiles to complete their paths. It’s absolute madness.

The first couple of games you probably lay relatively straight tracks through the lab, as you’re getting used to the shapes available in the game and working out how they combine to make a safe route. As you play more, you realize that you can actually sometimes go backwards, allowing you to collect more coins, and some of the objectives actually encourage you to do so. You will also learn how to place the shapes to make more compact paths, which also allow you to grab more coins, but which slow your progress through the lab. In fact, once all players have learned how best to use the shapes, rounds will end with all players being forced to finish early, because the central pool of tiles is empty.

Not being able to get out of the lab isn’t a big deal though, as you don’t get any bonus points for escaping. Focussing on getting more coins can actually be more advantageous, which is reminiscent of many horizontally scrolling computer games, where you’re frantically pulling back on the controller to slow the pace and collect more bonuses.

As much fun as Jetpack Joyride is, I do feel that it does get very repetitive after a few games. You can switch some of the lab tiles for more difficult versions, but even so you will find that some people will just get too good at connecting the shapes into a highly effective path, while others never quite get there, which means they will simply never win. Even when all players have got their eye in, it is just the same every time.

Of course, there are different objectives, and you can also get power-ups to give you extra points, but the variety they create, doesn’t really change the gameplay a huge amount. So even though I will keep the game in my collection, it’s mostly due to the novelty and nostalgia factor, rather than anything else.