In the year 3030, mankind has developed the technology to hold epic real-life battle events where daring fighters skilled in direct combat and with hundreds of hours of experience piloting the latest advancement in mech suits, race around an arena where they place their turrets and mines, collect credits to buy weapons and shields, charge their energy storage and don their power suits in an attempt to reach the mighty mech exoskeleton, so that they can leave victorious, as hundreds of millions of viewers watch the proceedings and bet on which of the Tiny Epic Mechs will win. 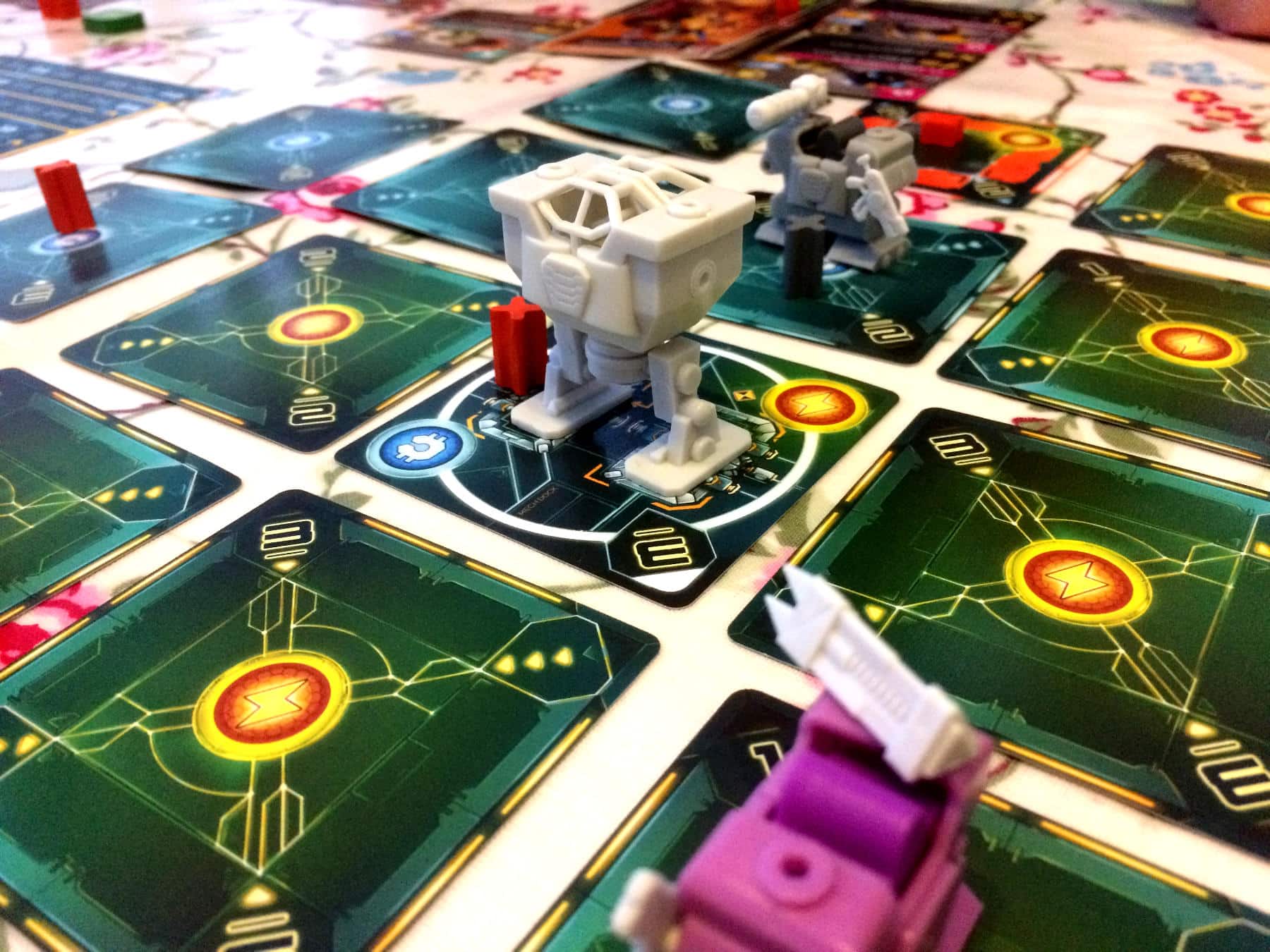 Finally, there is another game in the Tiny Epic series that Gamelyn Games is famous for. I was drawn to this game because of the programming mechanism, which in my view is what makes this game so much fun and creates a feeling of control, until something unexpected undoes everything. So let me explain what I mean.

On your turn, you secretly play four command cards, which basically consist of different types of movement. You have to think ahead and visualize where your player character will be within the arena at each of the four movement steps, because you can’t change the order of the commands, or skip or change commands, once you have played them. They are locked in.

Yet, planning ahead isn’t necessarily difficult. The problem comes that all players do their programming too, and when everyone is done, the first player reveals their first movement command and executes it, followed by the second player, and so on. As you can imagine, as everyone moves their character on their turn, your next command may lead you to cross paths with another player, and when two players occupy the same space, combat ensues. Again, that’s not too surprising, but the problem is that the result of the combat will lead players to be forced into a different space.

So all of a sudden your next movement is from an unexpected location, meaning you end up entering a space that you hadn’t intended to enter, as your commands mercilessly run through step by step until the bitter end. The problem is that players can lay mines or erect turrets, which you had carefully planned to walk around, but now you are forced to take damage, which you hadn’t expected.

The programming mechanism is a lot of fun. Players will start to try and work out what everyone else might be doing. You might intentionally plan to get to another player, because you feel strong enough to fight them, only to find that they had other ideas and walk off into a different direction, leaving you wondering around the arena seemingly aimlessly.

There is also a lot of double-bluffing going on. You have to constantly wonder whether someone is definitely going to do what they say, or if they’re bluffing – or if they know that you know that they’re bluffing. It’s an endless mind game and especially fun when you play with people you know, because you think you know what they will be doing next, just to find that they knew you knew, and have outwitted you.

The combat itself is a little disappointing though. It is basically a matter of who has the most number of weapons, because you have to retire and retreat from the battle if you have no more weapons ready to fire. That means that even when you initiate battle and have a hugely powerful canon, while your opponent only has a feather duster and a rubber mallet, they will still force you to give up and they will claim victory and collect a point. That feels very anti-climatic, but is clearly an intended mechanism in the game. You are encouraged to avoid battle until you can come out victorious with the right number and combination of weapons.

As you will see from my unboxing video, you get a huge amount of little weapons, which you can physically attach to the little meeple, the power suit or the epic mech. There are also lots of little wooden pieces representing the turrets and mines, and combined with the square cards that represent the arena, the whole game has a great table presence. As you play, it’s really fun to move your little meeple, attach the weapons and make “pew, pew” noises.

Personally, I don’t like plastic meeples, but I can see how it would be virtually impossible to create wooden meeples that allow you to attach the various weapons to. So from a practical perspective, it makes perfect sense, but from a tactile viewpoint it’s not quite as satisfying – but that’s really only a very minor point.

Overall I can highly recommend Tiny Epic Mechs to people who like a bit of quick, fun, direct mech combat. You will love the moments when your program works out, as you pre-plan your four steps – and you will laugh when your mech hits the wall again, because your commands didn’t work out as expected.