In the jungle, the mighty jungle, there is no lion, but a bunch of four, intrepid explorers trying to make their way through. The paths they cut into the vegetation will cross each other and wind their way almost aimlessly from the edge of the forest to finally emerge at four different temples and each explorer is trying to get to their specific temple. It’s not clear why each explorer has their heart set on only one, specific destination, but that’s how it goes in Karuba by HABA. 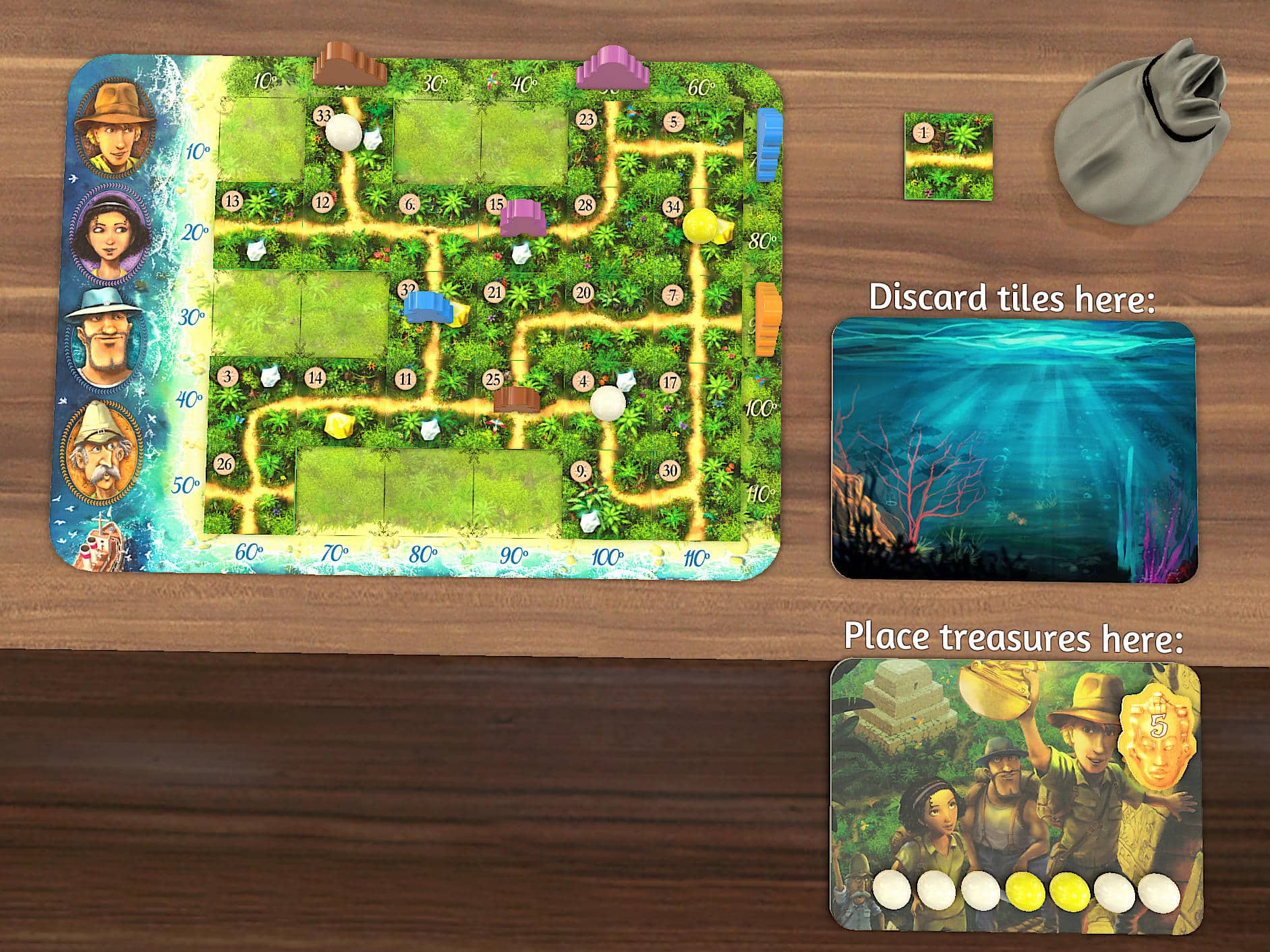 “Again, again, again!” was what I shouted after we had played the game for the first time – and the second time – and the third – and the 13th. A friend of ours had taught us Karuba, which is a wonderful tile-laying, race game for all the family. Yes, we played it 13 times in one evening, that’s how addictive it is.

I know, I shouldn’t put how I felt about the game at the beginning of my review, but leave you to read the whole article and find out for yourself at the end, a bit like the explorers in Karuba start at one end of the jungle and lay tiles to create paths through the thick forest that will ultimately lead each one to the temple matching the explorer’s colour. However, this game is so wonderful, I couldn’t contain my excitement and had to share with you how great this game is straight away.

So, here we have a game that takes something like 15 to 30 minutes play, which is great. It’s also really easy to teach and learn, which is another bonus. I only played Karuba online, but it does feel like it’s also really quick to set up, which is another tick in the “amazing” box. Even though players will carefully choose where they place each path tile, at the end of the day, the whole game is based purely on luck, levelling the playing field for players and making it accessible to the whole family – another tick. The illustrations are also wonderful and there is a lot of excitement as you try and decide when to move your explorers forward, along the paths you have laid for them, and when to place the path tiles instead. So here is one more tick.

I think you get the idea. I love, love, love this game, because it has very few rules, plays quickly and has a lot of randomness, but requires players to plan ahead to some degree.

So in Karuba, every player has their own board, their own jungle, and every player has four explorers, each in a different colour, and a temple for each coloured explorer. You’re trying to connect the explorers to their temples and then move them along the paths. The first player to reach the temple of one colour gets a certain number of points, the second player to reach their temple of the same colour gets slightly fewer points and so on.

So it pays to check what other players are doing and what explorers they have sent into the jungle first. You might fancy a race with them or you might decide to send a different explorer, one that none of the other players has sent off yet, so that you’re the first to reach the temple of that colour.

Even though every player has their own board, all players have the same set of path tiles and even though tiles are chosen at random, everyone plays the same, randomly selected tile at the same time. So in theory, everyone could end up with the same maze of paths as everyone else, but of course, at some point players think they can see a better way of solving the path maze and start placing their tiles somewhere else.

Instead of placing path tiles on your board, you can move one of your explorers a certain number of steps along the already laid tiles. Along the way, they may even pick up silver or gold coins, which are additional points, that often decide who wins the game in the end. So even though you’re all racing to reach the temples first, sometimes it’s worth going a little slower and picking up coins instead. They can give you just enough of an edge over other players.

The game ends when one player has led all of their four explorers to the matching temples and whoever has got the most points wins. It’s as easy as that.

Although the game is a lot of fun, it has a couple of issues. The smaller one is that when you play the physical copy, one player randomly draws a tile from their set, calls out the number printed on the tile and then all the other players have to find the matching tile from their set. That can really slow down the game and take away from the excitement a little bit.

The bigger problem, of course, is the setting. Yes, it’s the Indiana Jones trope of “white man steals relics from another culture and another country to be put in a museum in their own country”. The game’s illustrations do feature a female looking explorer, but everyone is white. Yet, when you play Karuba, none of that really comes through. The explorer meeples are yellow, brown, blue and purple, which is more of a colour-blind issue than anything else.

Your explorers aren’t taking anything out of the temple, let alone try and return those items back to their starting points. Yes, the explorers do pick up silver and gold coins along the way, but that feels a lot more like picking up energy boosts or point bonuses in a computer game.

So even though Karuba‘s setting does reinforce the tired old idea that white people can go to another country and take what they want, it is nowhere near in the same league as games where you trade in the Caribbean. It feels a lot more like a mix of Carcassonne with a classic, 8-bit dungeon crawl computer game. However, if the designer and/or publisher changed the setting or made the game more abstract, it would, of course, be much better.