As many of you will know, I absolutely love small box games, and mint tin games in particular (see episode 6 of the Tabletop Inquisition podcast). They’re so easy to stash away and take with you anywhere, and Mint Works by Five24 Labs is a great example. The small mint tin is robust and can easily deal with knocks, it’s quick to set up, as it consists basically of a deck of cards, and the tin itself functions as the pool for the mint worker tokens. The gameplay is also relatively quick, so overall it’s ideal for when you’re out and about – on a train, plane or a bus, or while you’re waiting for food in a pub or restaurant. 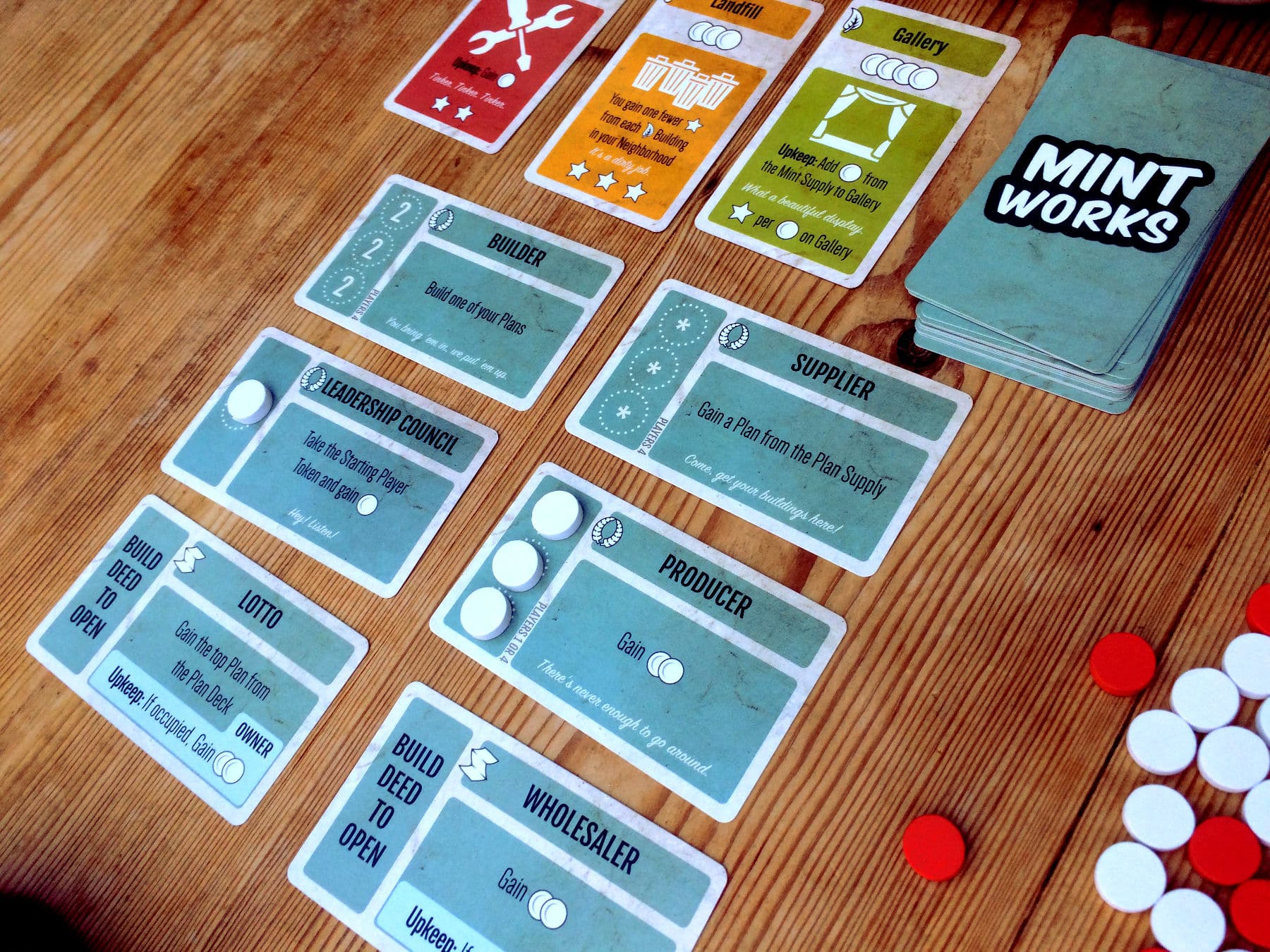 In Mint Works you use your little wooden mints, which function as your workers, and place them on a number of cards that act as shared worker spaces, so that you can buy buildings, or rather blueprints, which you then convert into buildings via another worker space – and it’s the buildings that give you victory points. Some buildings give you certain benefits that reduce the cost of some actions, others give you bonus points depending on what other buildings you’ve got. As soon as someone has 7 points, the game end is triggered, giving everyone one more turn, and therefore the chance to score more points – and whoever has the most points after that is the winner.

As you can see, the rules are very simple, which means you can quickly explain the game to a friend, and in no time at all you’re playing it. Each turn is also very quick, as there are only so many actions you can actually take, meaning the analysis paralysis is pretty much ruled out. The game has space for conversation, even as you take your turn, as your brainpower isn’t used up with finding the optimal action. It is all effortless, which might be a turn off for some people, but there is no getting around the fact that Mint Works is a light game – but that’s not a bad thing. It means that you can easily play several games in quick succession, and still have plenty of time to play a more complex game during your games night.

There is also a solo mode, which is great and allows you to play a game or two during your commute to work – or maybe on an evening if you travel a lot and want to while away the time. I’ve not played the solo mode myself, so I don’t know how well it works, but I do know that the game scales really well from two to three and four players. The set up of the shared worker spaces changes, meaning that you have to adjust your strategy slightly when you play with a different number of people.

The scaling works particularly well for two players, which isn’t the case for many games. Yet, playing Mint Works two players is a lot of fun and feels tight enough without making it confrontational. I have played it a lot in two player mode and enjoyed every single game.

Overall the quality of the components is great. The cards are the perfect thickness and the coating protects them from the worst of the wear and tear, even if you play the game outdoors. The wooden mints could be slightly heavier, but if you keep them in the tin, they will stay put and not get blown away, if you decide to play the game at a picnic table outside.

Mint Works was available from the Five24 Labs website at the time of writing, but you might have to be quick to get a copy. Alternatively, look at some of the other games in the Mint series by the same publisher. There is a great selection, each offering a slightly different challenge to players, and there is now also a co-operative Mint game available, if that suits your game group more. In any case, I can highly recommend Mint Works. It’s a great, fun, quick, light game.