History was an interesting place for all of us. We recognized a number of famous figures, while some were new to us. As we travelled through the ages, we encountered new people and learned about different events. Some eras were more familiar than others. Our aim was to be the first to reach the present day. We all took part in A Race in Time from History Heroes. 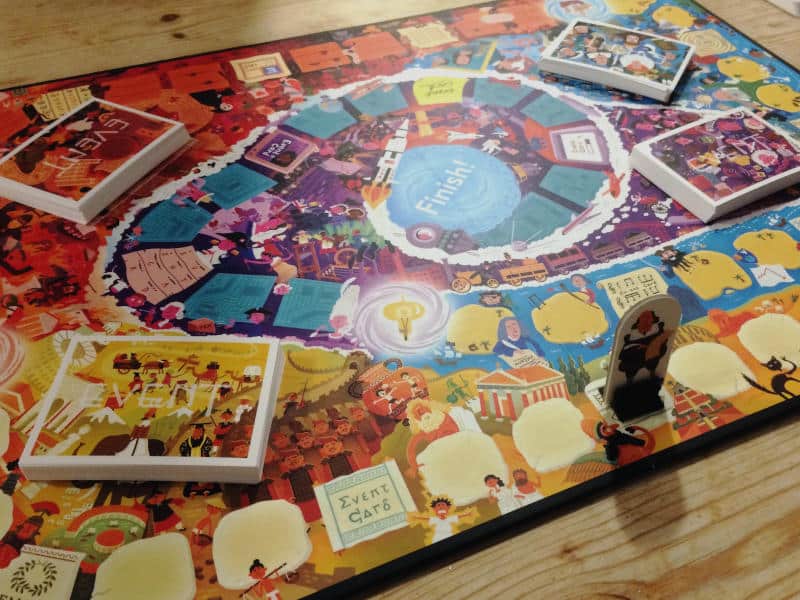 A Race in Time

I love it when games try to teach us about the past and the present. I was never any good at history, so I always shy away from trivia games. However, A Race in Time is different. It is aimed at players from as young as eight to as old as eighty, even though the upper limit is really only academic of course. That’s quite a claim, because I don’t think many eight-year-olds have a huge grasp of historic figures.

Looking at the characters that you have to try and guess, there are many names that I didn’t recognize. As I say, I’ve only got limited knowledge of history, but while many of us, me included, will have heard of Aristotle, Boudica or Columbus, not many people will know Angelou and there are many others who feel a little bit more obscure.

So in that sense, everyone, whatever age, will come across people whom they know nothing about, which creates a sort of level playing field. A Race in Time goes further though. There is a poster with all the people that appear in the game that lists their names and a brief fact about them. The rules encourage you to use this poster as much or as little as you like. You can basically choose the level of difficulty that you want.

That means you could say that older players around the table aren’t allowed to look at the poster, while younger players can. You might also allow everyone to look at the poster before the game, so they can try and remember some of the people they’re not familiar with. It’s really up to you how you want to play.

In fact, the whole game is all about choosing the difficulty level you want, because on your turn, another player draws a card from the deck of the era you’re currently in. That card shows a historic figure from that time and six facts about them. These facts are numbered 1 to 6 and the higher the number, the harder it is to glean the person from the fact. If you guess right, you move that many spaces forward on the timeline. If you get it wrong, you don’t move.

So choose 1s or 2s every time and be relatively confident that you can name the person. You will move forward only 1 or 2 spaces, but it’s slow and steady progress. If you go for 6s every time, you gamble on a big leap forward, but you also risk standing still. You could even house-rule it so that older players have to choose a more difficult fact.

The thing is, when we played A Race in Time, everyone around the table, irrespective of their knowledge of history, ended up using the poster all the time. That really slowed things down. Of course, we usually found the right person and learned something new, but sometimes even with the poster, we got it wrong. So halfway through the game, we wanted it to be over.

I think there is a certain age group who will be great at this game. My daughter’s history knowledge is huge for example, as she’s fresh out of school. She breezes through the facts and easily wins the game, while I struggle to guess some people even with the easiest fact. Mind you, it also depends a bit on the era in time that you’re currently in. I found some of the ancient history characters easier to guess as well as some of the modern times, while the other two time ranges weren’t quite my thing.

Yes, there is also a bonus fact on every card that is supposed to give you an additional clue, in case you get really stuck. However, even that often didn’t give me enough information to be able to identify the person on the card. In fact, sometimes the harder facts seemed to be easier and better options.

I think A Race in Time could work well as an educational game, but you have to accept that it will take a while to finish it. Maybe you allow everyone to move twice as many spaces to shorten the track a little. I would also say that an eight-year-old is possibly a bit too young to benefit from this game. A starting age of 10 seems a bit more appropriate to me.

A Race in Time

The great thing about the game is that there are expansion packs, which add more characters to the different time zones. I guess it’s a must for every trivia game, because if you play it often enough, you will know everyone – and of course, that’s the aim of the game. So you can expand your knowledge further if you buy a new pack with more cards.

So overall I think A Race in Time needs some tweaks, but it really can teach you more about figures from history. As an educational game, it can work really well and I think younger players won’t actually lose patience halfway through, as we adults did. They’ll be eager to be the first to reach the finish line. So maybe it’s all about who plays this game and what they’re trying to get out of it.