The boats were making their way out to sea, heading for the three main fishing grounds off the coast of the Isle of Norsica. You were hoping that your fleet would bring back the best catch. It would require brain and brawn to beat the rival clans and land the biggest fish. If your clan could grab the most lucrative haul, you would be crowned Skora by Rory Muldoon from Inside the Box Board Games. 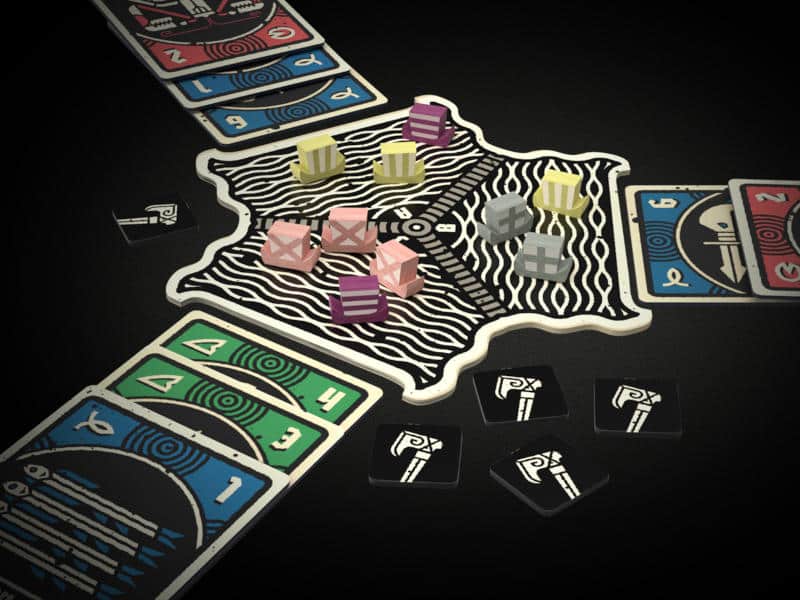 Here is the first game in Inside the Box‘s Lunchbox Collection. These games are designed to fit into an hour’s lunchbreak, including teaching and playing it. Games from the series also come in a lovely lunchbox-sized box with a magnetic closer, which makes a very satisfying click when you shut the box.

Skora certainly hits the mark. It’s really easy to explain and plays very quickly. Yet, it’s rather hard to master, but the more you play it, the better you will get. It will take people a whole game to fully understand how it all works and several games more before they will be able to use their hands of cards effectively. There is definitely a bit more depth to the game than it might at first seem.

Send Out the Boats and Catch the Fish

The game has two main phases: playing cards from your hand to send out your boats and purposefully drive the shoals of fish between the three main areas – and hauling in your nets to try and bring home the best catch. You constantly jostle for position with your boats to be the one who controls one of the three fishing grounds, while also trying to push fish towards your net.

Every card represents a type of catch, as well as the size of the catch. You want to end up with the higher value cards at the end of the game, but you also need to keep an eye on the type of sea creatures you bring home, depending on the two bonus cards that are randomly selected at the beginning of the game.

Having the most boats and the biggest haul at the end isn’t guaranteed to win you the game. Sometimes you’re better off picking specific sea creatures to give you the points you need to score the extra points that will give you victory.

Some of the cards that you play let you put a number of your boats into the location you play the card to. Ideally, you want more boats than the other players in a location, because that gives you first dibs, but usually, everyone ends up with a similar number of ships. It’s not the end of the world if you pick after another player. If you play your other cards right, you can ensure that the area is full of big shoals of fish and that guarantees that you can still fill your nets.

The worst thing that can happen is to end up with more boats in one location than there are cards. It’s a disaster and means some of the boats will come home with empty holds after having risked their lives on the high seas.

That’s why playing the non-ship cards tactically is so very important. These cards allow you to move a previously played card to a different location, effectively driving fish away and hopefully towards your other boats’ wide open nets. Just bear in mind that everyone is trying the same – the fish are constantly moving.

The Cold and Deep Sea

The artwork by Rory Muldoon is absolutely on point. It’s really clean and crisp and everything is laid out very clearly and thoughtfully, which is what Rory is known for. There is a sort of nordic feel to it all, which I think is intentional. Even though the game isn’t set in any real-world location, it does try to put players into the mindset of hardened fisherpeople who brave the high seas of the wide ocean every day and in every weather.

You begin to feel the cold as you start to play. That’s probably because black is the dominant colour, which conveys the cold climate and the deep sea both at the same time. It’s only the very competitive and ruthless nature of Skora that offers a glimmer of heat and stops you from rubbing your hands together to keep warm. Mind you, when you execute the perfect play and with a single card turn the tide in your favour, you do want to rub your hands together – not to kickstart your circulation, but because you’re full of glee.

The components and the overall product are of high quality and I know I said it before, but I have to say it again: I love how the box snaps shut with a satisfying click. The little wooden ships are wonderful and feel nice in your hand as you send them out into the foreboding water. The thick cardboard game board, if you can call it that, and the axe tokens, which are used to decide ties, are tough and will survive a lot of abuse. The card stock is thick and finished in a sort of matt coating, which makes them easy to shuffle, hold and play. The rulebook is clear and easy to follow.

It’s also wonderful to see no plastic, other than a little baggie to keep the tokens in. After all, there is enough plastic in the oceans already and our clan wouldn’t do well bringing that home in their nets.

The only gripe I have is that the box is much bigger than the components warrant. I do understand that the box size was chosen to mimic a lunchbox, but Skora is basically a deck of cards and a small bag of tokens, which you can easily fit into a much smaller box. So there is a fair bit of air in the game box and it doesn’t smell of the sea.

Speaking of boxes, apart from the game box itself, Skora really does tick all the boxes for me. It’s a game that is really quick to teach and learn, very quick to set up and plays in less than 30 minutes. At the same time, it offers a good amount of depth and is the sort of game you play a couple of times in one session, then put it away for a week or so, before you get it out again. It’s a real evergreen – or maybe that should be everblack, if you look at the art. Anyway, Skora is definitely going to stay in my collection for a long time to come.