Get your friends together, grab some bits from the local junkyard and assemble everything into the best stronghold you can, to be crowned champion of the Junk Forts by Matthew Dunstan and Brett J. Gilbert from Inside the Box Board Games. 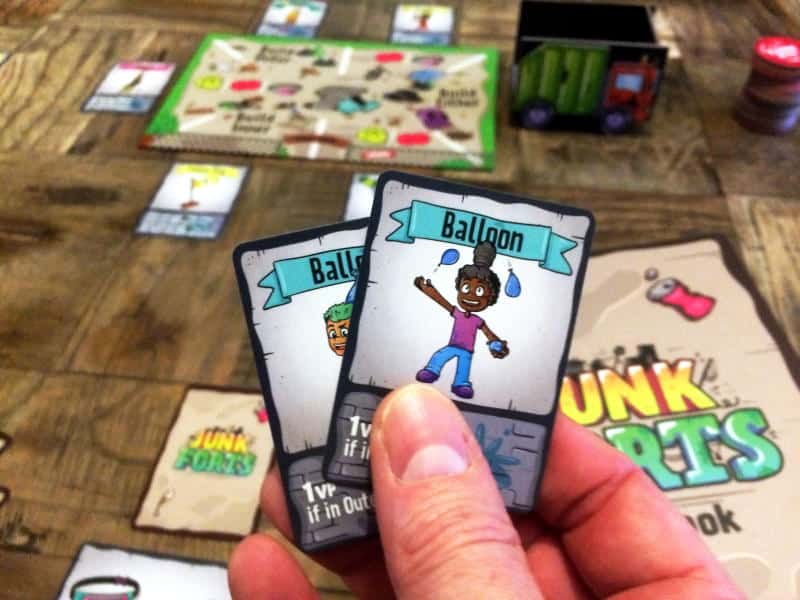 Well, that’s probably one of the shortest introductory paragraphs I’ve ever written, but then this game is from Inside the Box‘s so-called Lunchbox Collection. Games in this series are designed in such a way that you can learn and play them during a single lunch break. That is, of course, if your lunch break lasts an hour and you’re not working for a company that only gives you the minimum amount of time to rest and recharge required by UK law. Anyway, I digress.

The point is, these are the sort of games you could bring to a games night, without having learned the rules beforehand and being able to teach and play it within 60 minutes – and that’s quite a high bar to try to achieve. Junk Forts is actually the second game in the series, with Skora being the first – and there are plans for more, if this series turns out to be popular.

Now, you may have the feeling that games about building forts are like London buses: there are none for ages and then suddenly six come along – or rather, two in this case. However, even though Junk Forts is about building forts, it is very different to its namesake, Fort by Grant Rodiek from Leder Games. I had to mention it though, because it’s the elephant in the room… or the fort… or whatever.

Anyway, while Fort is a deck-building game, Junk Forts is a hand management game and much more about set collection. Also, in the former, you score during the game, while in the latter you only count up your points at the end. I could go on, but let me just say that the only things that are true for both games are that they’re both card games and that they’re both about building the best fort you can. Oh, and in both games the person with the most points wins – but I guess that’s true for most games.

So let me focus on Junk Forts. As I said, it’s more of a hand management game. Every turn you draw a card and play a card. There is a rondel of cards and you can always only take one of the next three cards, unless you pay to take a card further ahead. The rondel’s slots don’t just have a card each, but also represent an action. You can add cards to your fort, which is where the set collection comes in, or you can add cards to your stash, which is another set collection element, your crew, which basically gives you additional points based on the cards in your fort or into the piggy bank, which gives you the ability to pay for cards beyond the three cards ahead.

Every turn you have to decide which card is useful to you, but also check what action slot that card is in, because the action you get may not work with the cards you have. You’re in luck when the card slot and card match. For example, if the action says to put a card into the outer wall of your fort (yes, your forts consist of two levels of wall) and the card that’s in that action slot gives you points for being played into the outer wall, then it’s a no brainer. However, often you need to have a card in your hand to do the action with and then draw the card in that action slot to use on a later turn.

There is a bit of thinking ahead here and trying to gauge what the other players might do on their turn. So if you hope to do a certain action on your next turn, you’re relying on the other players to go around the rondel in such a way that you can reach that action slot when it’s your go – or you may have to pay to go further and get the action you want. It’s a constant balancing act.

Yet, even though there is a bit of planning and thinking involved, it’s just at the right level. So even during a busy day at work, you should have always enough brain capacity to play it during your lunch break. The same is true for playing Junk Forts at the end of a long day with your friends or family.

Speaking of family, I think the game is suitable as a family game. The artwork is quite cartoony, so should appeal to younger players, but not too childish to be a turn off for more “serious” players. In fact, Junk Forts will offer something for everyone, whether you’re looking for a thinky game or if you just want to have a quick game to pass the time.

Junk Forts is also really easy to learn. There are a couple of things in the rulebook that weren’t clear straight away and one of the cards seems to contradict what it says in the rules, but when you start to play, it all falls into place and you can simply decide as a group whether you follow the card text or the rules. It’s not a big issue.

So, yes, the game does really tick all boxes to fit nicely into the Lunchbox Collection.

The components are really lovely too. As I said, the illustrations are really fitting and there is a 3D cardboard dumper truck, which holds the draw deck and also marks the position in the rondel where you start your turn. You move it around as you take your action. It’s got a really good table presence. The cards, the cardboard tokens and the junkyard board are also of really good quality and the game box comes with a magnetic lid, so it snaps shut with a satisfying click.

However, there is a snag for me. The game is really just a deck of cards, some cardboard tokens and the 3D dumper truck. So when it’s all disassembled, everything just rattles around in the box, except the cards, which fit nicely into the cardboard insert. The thing is though, the insert takes up most of the space and the deck of cards almost disappears. Also, you can’t just take out the insert so that you don’t have to disassemble the dumper truck every time you finish playing, because the truck is just a little bit too big to fit into the box. So you do always have to take it apart and put it into the box flat.

That doesn’t stop you from playing the game, of course, and you don’t even need to bother with the dumper truck, but it does annoy me, as it could probably have been addressed relatively easily. It would have been great if the truck fit nicely into the box and the insert made room for it, the tokens and the deck of cards. That would have been amazing.

Despite my niggles though, the game is good fun and even though it’s nothing earth-shatteringly new, it is the sort of game that will nicely fit into a lunch break slot or will be ideal before or at the end of a games night. Give it a go and see what you think. Maybe your fort will be the best in the junkyard.