We had pulled off the heist of the century and everyone was still buzzing, pumped with adrenaline. We had made it safely back to our hideout and now it was time to divvy up the loot. We were about to count out cash, gold, gems, paintings and microfilms when the boss came up with a crazy idea. “Let’s play Blackjack,” they said, “and sort out who gets what that way.” They even gave it a name. They called it The Split by Michael Fox from Wayfinder Games. 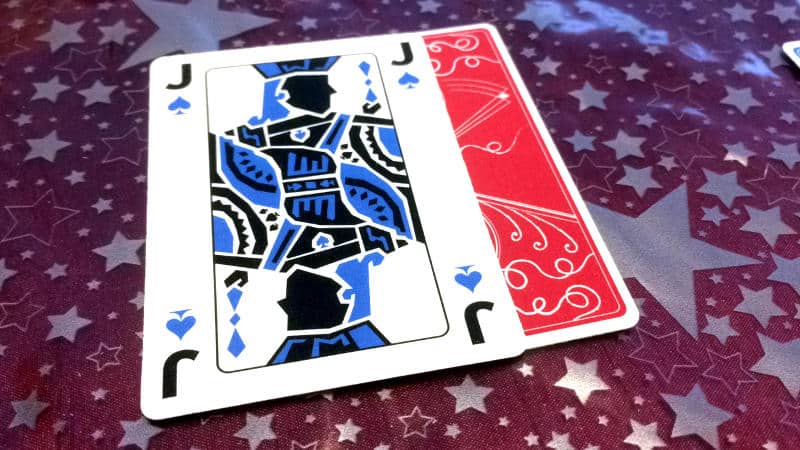 Yes, that’s basically the game. You play a number of rounds of Blackjack and divvy up piles of loot based on who got closest to 21 without going over and at the end, everyone counts up their winnings and the one with the most value stash wins. Of course, there is a little more to it than that, otherwise Wayfinder Games‘ inaugural release would not be as much fun as it is. There are a number of things that make The Split different to a simple game of Blackjack.

First of all, it’s not a matter of the person closest to 21 winning all of the loot, but instead, there are a number of piles of loot, drawn from a shuffled loot deck, but there is one pile less than there are players. The person with the highest Blackjack result gets to choose first, then the second-highest and so on. Ties are resolved by going clockwise from the player after the dealer.

Secondly, it’s not a simple matter of choosing the highest value pile of loot, because even though some of the loot, like cash, gold and gems have a given monetary value, paintings and microfilm have values that vary. The more paintings you have at the end of the game, the more the set is worth, with increasing value as you get more paintings and microfilm is worth the most to the player who has the most microfilms and the second-most to the player with the second-most microfilms, while everyone else gets nothing for their microfilms. So a pile of loot that might be very valuable to one player may be less valuable to another.

Thirdly, you’re not just playing Blackjack. Every player starts with a so-called Cheat card, which allows you to influence the outcome of a round of Blackjack. Some Cheat cards allow you to subtract 1, 2 or 3 from your Blackjack card value, so when otherwise you would have gone over, you can bring the result back to 21 or below, putting you back in the game. Other cards allow you to switch with another player or discard a card from your Blackjack hand and there are more. So you can never be sure if your result is the highest until everyone reveals their Cheat cards.

Fourthly, even if you have the most valuable loot at the end of the game, you will still lose if you didn’t also get a disguise. These are part of the loot deck and will come out randomly in one of the loot piles during the game. If someone ends up with more than one disguise, they have to offer it up to those players who ended up with none. However, there is one less disguise in the deck than there are number of players, so one of you will definitely go empty-handed and not be able to escape to a country that has no extradition agreement with your home country.

Maybe all of this sounds rather complicated, but it really is not. Many people will know Blackjack, even if they know it under a different name, such as 21, Pontoon or Vingt-et-Un, so that part of the game usually needs no explanation. Explaining about the piles of loot is also no biggie, because you really only need to explain how the paintings and microfilms are counted, but even that is really easy, because there is a player aid with the information on it. The only thing you really need to explain is about the disguises and you really need to stress that at the beginning, so nobody is disappointed when they have the most loot, but still lose because they didn’t get their disguise.

I was able to explain The Split in around 10 minutes to a group of people who weren’t very familiar with modern board games, but they all knew Blackjack or 21 and they picked it up really quickly. They also had a lot of fun, not only during the Blackjack round, but also when it came to playing their Cheat card and choosing their piles of loot. The Split also plays in around 15-30 minutes, so it’s really quick and we ended up playing it a couple of times. The player count goes up to 6, which makes this an ideal game for when you have a group of friends or the family over for an afternoon.

The game comes in a small box, about the size of two decks of 52 cards sitting side by side. The deck of playing cards can be used for more than just The Split of course and it, as well as all the Cheat and loot cards, are beautifully illustrated by Rain Watt. It’s a very fitting style for a game about splitting loot.

I really love The Split and I’m not only saying that because I was backer #1 of the Kickstarter campaign and one of the Cheat cards in the game is based on my suggestions. It just ticks a lot of boxes for me: it comes in a small box, so it’s easy to take with you, it is easy to teach, it plays quickly and it goes up to a relatively high player count. The playing cards can also be used for other card games, which makes the game really versatile.