Yes, Christmas is just around the corner, so it’s time for me to put together lists of games you might want to get out over the holidays and play. I thought I’d start with a list of five games that you can play with all the family. These games are easy to teach and learn and quite quick to play. Most of them can be played up to four players, so if you have a large family gathering, you might need to split into smaller groups. I hope you find this list useful. 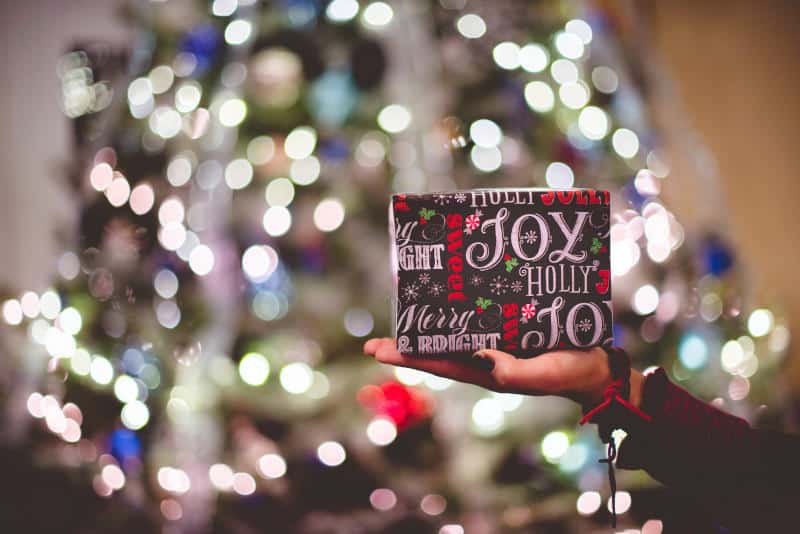 (Photo by Ben White on Unsplash)

The Split by Michael Fox from Wayfinder Games is a competitive game where players are a gang of criminals who have pulled off the heist of the century. Now it’s time to split up the loot. Rather than giving everyone an equal share or splitting the spoils based on how much work everyone put into heist, you decide to play several rounds of Blackjack. After all, that way everyone can show once more how great they are at bluffing and cheating and make off with the lion share, leaving the rest of the gang with scraps.

As this game goes up to 6 players, it’s ideal for a larger family gathering. Maybe it’s not quite the right game for a younger audience, but with a little help from a grown-up, everyone should be able to take part. After all, most people will know how Blackjack works and if they don’t, it’s very quick to explain: get as close to 21 as possible, without going over.

The game itself consists of dealing out a number of loot cards, then playing a round of Blackjack and finishing it off with playing cheat cards, if you have any, that can adjust your result or cause havoc at the table when you do a table flip, where you swap your hand of cards with another player. So even when you think your Blackjack hand is safe, you may get a nasty surprise from one of the other players.

The whole game is over when the loot has been divvied up, at which point you work out the value of your loot, which consists of either fixed value items or is a matter of set collection, depending on the type of loot. There is one last twist before you decide who the winner is, because you end up losing everything if you didn’t manage to win a disguise in one of the rounds of Blackjack.

The Split will lead to lots of laughter, moments of intense poker faces and you soon want to play it again – and again.

Mint Tin Mini Skulduggery by Kate Beckett and David René Miller from subQuark is the perfect family game. Not only is it really easy to teach and learn and very quick to play, it also comes in a mini mint tin, which means you can literally put it in your coat pocket or your handbag. What’s even better, pretty much anyone can play this game, as long as they can read dice.

It is a competitive game, but it is purely based on dice rolls, so it’s very heavy on the luck element, which really levels the playing field and allows everyone, irrespective of their experience with board games, to play this game and be in with an equal chance of winning.

You start the game by rolling a single six-sided dice to decide the so-called “spirit number”. Then players take turns rolling three dice. If at least one of the results of a single dice matches the spirit number, then you get skulls: one if one dice matches, five skulls for two matching dice and ten skulls for three matching results. The first player to get to exactly 15 points, without going over, wins.

There are a handful of other things, such as a crystal skull that allows you to block a dice result, as well as the Skulduggery coin which comes into play at certain times and can force all players to pass their skulls to the next player in clockwise order. These add a small element of tactics, but nothing too difficult.

The game is really gorgeous. The tin is hand embossed, the metal coin is custom to the game and the skulls are small plastic beads that look wonderful. The dice are also lovely and the whole game is really tactile. A great game for the whole family – or you can play it solo if everyone is taking a nap after the big Christmas dinner.

I’ve played Karuba by Rüdiger Dorn from HABA only online, so far. I’m still looking for a physical copy of this wonderful family game. It’s another competitive game that’s really quick to teach, learn and play. It’s also very multiplayer solitaire, which means there is basically no player interaction.

Every player has their own jungle board and four explorers with four matching temples. Each of the four explorers has a different colour, which matches the temple that they’re trying to reach. Your task is to lay paths through the jungle that the explorers can walk along to reach their destination. Every round, a new tile is selected and every player finds that tile in their stack and then places it into their jungle. Alternatively, they can discard the tile and move one of their explorers a certain number of steps along the paths.

The first player to reach a temple of a given colour will get a certain number of points, the second player to reach their temple of the same colour will get fewer points and so on. There are also gold and silver coins along the way that explorers can pick up and that are also worth points. Once all tiles have been drawn, the game ends and the player with the most points wins.

It’s the ideal game that everyone can play. A bit of spatial awareness will be beneficial, just like it is in Carcassonne for example, but other than that, it doesn’t matter your age, board game experience or much else. It’s ideal for the whole family and one of those games that will quickly become very addictive.

Colt Express by Christophe Raimbault from Ludonaute is a so-called programming game. It’s another game I’ve only played digitally so far, but a physical copy is on its way to me and I can’t wait to play this over Christmas with the whole family. It’s another game that can be played with up to 6 players, which makes it a lot more versatile in a family Christmas setting.

The game also benefits from its visual appeal. It comes with a 3D cardboard train into which you place your wooden bandit meeples. As you take your turns and move through the train or go between the roof and the inside of a carriage, your meeple moves accordingly, so you can immediately see where everyone is. I think it will really encourage people to the table and see what this game is all about.

In the game, you’re basically a bandit, trying to rob the train and get away with as much loot as possible. The problem is, you’re not the only bandit. The other players are also bandits and there is even a marshall who is trying to stop all of you. So you’ll be punching each other, having shoot-outs and trying to steer the marshall to your competitors, so that you come out on top.

The thing is, you don’t just take turns to move your meeple. Instead, you take turns playing action cards, which represent things like moving into the next carriage, picking up loot, moving to the roof, punching or shooting – or moving the marshall. Each game round, players take turns playing a single card and going around the table a certain number of times. Depending on the round, players might play cards face-up, face-down or a combination of both.

Once the round is over, the played cards are then resolved one by one. So, effectively, you program your moves in advance and you have to second-guess what other players are going to do, as well as keep in your head where in the train you are, so that you don’t punch into thin air or walk into the arms of the marshall.

As you play your cards, you think you’ve got it all planned out. So when the cards are resolved later and things don’t quite go your way or rather, everything goes wrong, you realize it’s not quite as easy as it seemed. Most of the time it’s just funny to watch your meeple try to punch another player, when they have already moved out of the way or if you think you’ve moved onto the roof, so you can avoid the marshall, but in reality, you end up inside the carriage and march straight into the marshall’s open arms.

It’s the sort of game that you mustn’t take too seriously or you end up getting frustrated very quickly. I know that programming games aren’t for everyone, but I would hope over the holidays, everyone is a bit more relaxed and happy to take Colt Express in the spirit it is meant to be played.

Kombo Klash by “Nero” Ondrej Sova from Hub Games is Memory on steroids – sort of. What’s certain is that, if you have a good memory, you will have an advantage. It’s also clear that people who love big combos will love this game. After all, the clue is in the title.

It’s another competitive tile-laying game, where you try to place one of your tiles so that it’s next to at least two other tiles of the same colour. When that happens, you can flip the tiles over and score points. The tiles also have specific effects, allowing you to flip tiles back face-up, so you can use them for a new chain or to move tiles one space along, again maybe allowing you to create a chain of three tiles. It’s all very tactical, but if you’re really good, you will create chain reactions and score a huge amount of points on your turn.

Kombo Klash is probably a little bit harder to explain than the other games in this list, but it’s still really easy to grasp whatever your age or board game experience. It’s basically a mix of Dominoes and Memory with some extra bits thrown in. So it shouldn’t be too difficult to learn and you should get into the swing of things quite quickly.

The game ends when someone reaches a certain amount of points, depending on the length of game you want to play. So you can start with a shorter game and once everyone is familiar with how it all works, you can decide to play a longer game and make things more interesting.