Being halfway up the mountain, in bad weather, the time when we were still acclimatizing at base camp felt like an eternity ago. I knew that “Squiggle” was ahead of me and had erected their tent, but I had to save mine for nearer the top, where we needed the shelter more urgently. I could only imagine the relative comfort my fellow climber was in, while I was hunkered down behind a small collection of rocks to take the brunt of the storm. I kept thinking how dangerous it was, but I also kept reminding myself of the ultimate goal: reaching the summit of K2. 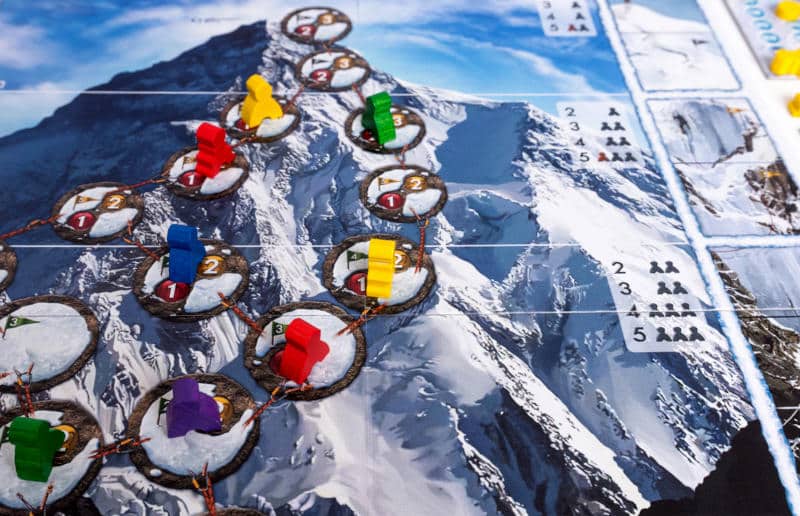 The game is relatively old now, but it’s probably the most exciting and thematic game I’ve ever played. The concept is pretty simple: try and get your two mountain climbers as high up the K2 mountain as possible, without dying. K2 is the second-highest mountain on Earth, or so the game tells us, and also the second deadliest. So, keeping your climbers alive plays a huge part in this game and is what makes it so engrossing for me.

The higher your climbers get, the more points they are worth and the player with the highest combined point score wins. It is fine and actually often desirable to bring at least one of your climbers back down from the summit. They won’t lose the points they have gained when they descend, but they will have a much better chance of survival. What you don’t want, is for one, or even both, of your climbers to die, because then they lose all their points, except one, meaning you’re highly unlikely to win the game.

Saying that, even though K2 is a race game at its heart, it’s also all very relative. After all, if an opponent reaches the summit, but subsequently dies, there is less incentive for the other players to go all out and push for the peak. It might be enough to get their two climbers just high enough, higher than the other players’, to guarantee them the win.

K2 is also a lot about timing. The game ends after a set number of rounds, so if you time it right, you can make the push for the summit right at the end and don’t have to worry too much if your climber has hardly any energy left. If they get there right at the end, then they only need to survive that turn, which is very doable.

The problem is, the higher you go up the mountain, the less room there is for climbers. The summit only has room for one climber, unless you play with five players, so if you’re too late and another player blocks the top spot, then you will never get there. At the same time, hogging the peak is no mean feat. It requires a lot of energy and oxygen and chances are that the weather is worse near the top – even though that’s not always the case.

In fact, the weather is another factor that influences the timing of your ascent. You can always look a few rounds ahead to see what the weather will do. Sometimes, the weather is terrible at base camp, but absolutely wonderful and sunny higher up. So you may be better off pushing for the summit earlier to take advantage of the pleasant weather or at least avoiding the storm that’s brewing further down.

There is another element in K2 that has to do with timing. Every player has a deck of cards, which is the same for everyone. The cards define how far you can climb or descend or they are there to replenish the energy of your climbers. Each round, players choose three cards in secret. Once everyone has chosen, the cards are revealed and the player with the highest movement might get an energy penality that they have to either deduct from a climber’s health or by foregoing movement.

That in itself adds a wonderful facet to the gameplay. You have to try and gauge what other players might do. You have to decide whether to go all out and try to go higher and potentially block the route for other players or whether to hold back and wait, increasing your climbers’ health first. Later in the game, this mechanism adds a lot of tension and excitement, because there is more pressure to either get your climbers to safety, if you’re in the lead, or to try and catch up at all costs.

However, with regards to timing, your deck of cards consists of 18 cards, you draw 6 into your hand and choose 3 in secret per round. The chosen cards are put into a discard pile and you draw another 3 cards to have a hand of 6. When your draw deck runs out, your discard gets shuffled and becomes a new draw deck.

So, ideally, you need to look 6 rounds ahead, because you choose 3 cards from the deck of 18 each round. You need to try and plan what you want to do and consider what other players might want to do. You also need to look at the upcoming weather. That’s all fine to start with, but of course, as you have fewer and fewer cards in your draw deck, the situation will be different to what you had planned and the cards you now need you have already played, or they’re still in the draw deck and you just have bad luck and don’t get them into your hand when you need them. Suddenly, all you can do is make the best out of a bad situation.

At the same time, your climbers will lose energy, depending on how high up the mountain they are, if they’re in a tent, as well as the weather and maybe the penalty token you had to take. So you need to play cards that replenish that energy or move the climber down the mountain to regain some health. You hope that your next card draw is what you need and you curse loudly and emphatically when your luck runs out or you realize that the perfect card you need is in your discard pile.

It gets even tenser when your climbers get near the top. Blocking doesn’t just work for going up the mountain, but also on your descent. So if you want to get one of your climbers down from the summit to the safety of a tent that was pitched earlier, but there are four other climbers below you, blocking your route, then all you can do is hope for enough movement value to get past them. Otherwise, your climber will be stuck there at the top and slowly freeze to death.

That feeling of dread and hopelessness is actually really palpable when you play K2. You pray for good cards and better weather, you hope that your climber can survive just one more round, because next round things will just be better. You really feel the cold, the wind, the tiredness and the desperate situation, but eventually, your hopes are brutally dashed and the reality is that your climber didn’t make it and their score of 10 is reduced to a single point.

I’ve seen games where a player would send their second climber to the top, just out of respect for their teammate who didn’t make it. They knew they couldn’t win the game now, but they made the ascend anyway, maybe secretly thinking that they could block other climbers and expose them to the same hopeless situation that their teammate had faced.

So, yes, there is actually a lot of player interaction in K2 and players may intentionally block each other for their own benefit. The strong camaraderie in the game only extends between the two climbers that a player controls – not between climbers from different players. It’s every team for themselves and help nobody else.

Let me finish by saying that I have only ever played K2 online, so I can’t comment on component quality or how it feels playing a physical copy. I do think though that the emotions that the game evokes come from the player interaction, the card draws and trying to time everything perfectly. I doubt that component quality will make a huge amount of difference to the excitement, despair and other feelings you will experience when playing this amazing race game.