Waves upon waves of attackers were lining up in front of me and behind me, two rows of three fighters each. I wasn’t daunted by having to face 12 highly trained warriors at a time, because as a samurai I was more than able to defend myself. I wasn’t even worried that every line of attackers would be replaced by another, creating a constant stream of enemies. The only thing that was on my mind was facing the bosses that would eventually appear at the end of each line – four in total. There was nothing for it. I had to give my all and fight for my honour, my Eiyo by ThunderGryph Games. 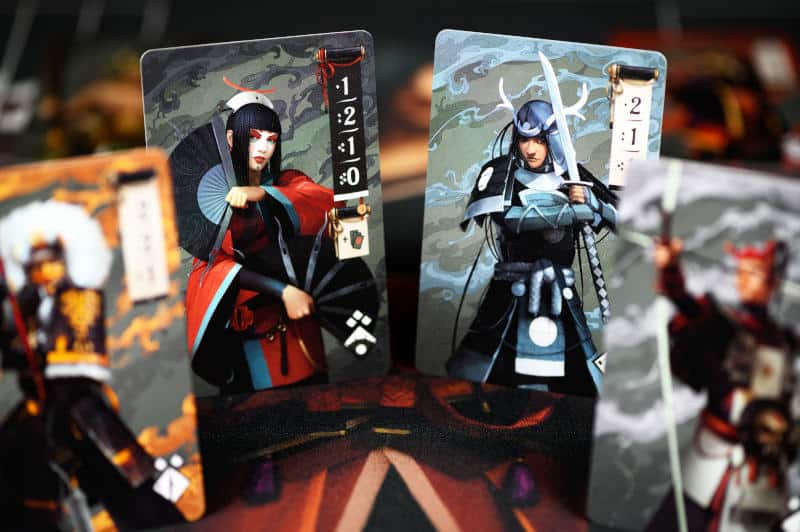 No, I’m not a solo player, but having backed the Matchbox Collection on Kickstarter, I ended up with one game that you could only play solo. Well, you can play Eiyo with two people, but it’s really just a solo game and playing it alone is the way to play it in my view. The thing is, even though I’m not a solo player, I really enjoyed playing Eiyo and there are a number of reasons for this.

First of all, the illustrations are gorgeous. Matthew Mizak‘s style works really well. The art on every one of the 80 cards that come with the game is really clear and makes it easy to quickly see what enemy you’re facing or what weapon you’re playing, but at the same time it’s also very beautiful and I would happily hang A4-sized prints of the card art on my walls.

Secondly, Eiyo is a card game, which does appeal to me. Playing it feels a little like playing a game of patience, or solitaire, as some of you will know it. I don’t want to use a cliché here, but it is almost Zen-like when you draw new weapon cards or enemies, decide which weapons to use for which attackers, place one of the metal coins to highlight which row of attackers you’re deflecting this turn and then resolve each card and do the housekeeping at the end of a round. It’s very relaxing and calming, even though what you do is using your samurai skills to kill the attackers and defend your honour. It should be really tense and nerve-racking, but it isn’t.

The other reason why I enjoyed playing Eiyo so much, is that it’s a relatively quick game. It takes a couple of reads of the rulebook and some double-checking to fully understand how it all works, but once you played through a whole game, everything becomes second nature and the game really flows. It can take a little while to separate the cards at the end of the game and set everything up again, but from set up to putting it away, Eiyo takes around 20 minutes.

However, the biggest reason why Eiyo ranks so high for me, even though I’m really not a solo gamer and much prefer to play games with friends and family, is that it’s so addictive. All you’re doing is beating your own score. Well, you need to reach a minimum score to officially win the game, but ultimately it’s about trying to get a better score than before when you play Eiyo, provided you don’t die before the end that is.

It sounds simple and boring and isn’t something that I expected to make me want to play again. Beating your own score seems pointless, but when you finish a game of Eiyo, you immediately think what might have happened if you had played your cards differently, maybe being a bit more careful in your attacks and keeping a card or two back for a future turn. You also wonder what would have happened if you had attacked a different row of enemies first and feel that you can and should improve your game. So you separate the cards, shuffle them, set everything up and play another game – and another – and another one after that.

Sure, there is a fair amount of luck in Eiyo. You can’t be certain what enemy cards come out, except that you know that the last row of attackers will include one boss, and you don’t know which weapon cards you will draw next. It’s all based on shuffled decks. The only choice you have is which weapons to use, which ones to keep and which enemies to attack, which ones to deflect and which ones to leave alone.

That’s the beauty of it though. You never feel overwhelmed. There aren’t any strategies to work out. There is no planning for you to do. It’s mostly about tactics and hoping for the best. That’s why it feels so calming. You draw cards, you play cards and you resolve the effects. Then you do it again and again until you either die or you defeat everyone.

At the same time, it does truly feel like you’re a lone samurai fighting off an overwhelming horde of enemies, using your almost magical weapon skills to execute elaborately choreographed attacks that will strike down many of your assailants. You feel the pain when the enemies hit you and you have to discard weapon cards as a sort of damage tokens. As you play Eiyo, you imagine a martial-arts film being played out in front of you, with you in the lead role.

It’s amazing how a deck of 80 cards and four metal coins can create such a wonderfully engrossing and at the same time relaxing and soothing experience. If you’ve never tried solo games before, then Eiyo is probably worth a try. If you love solo games, then Eiyo is going to be a winner.