The seasons had been disrupted, a clear indication that climate change was taking its toll. Animal migrations were affected and everything was out of sync. We had to do everything we could to restore order in the world and make everything right again. However, we only had 15 Days by ThunderGryph Games. 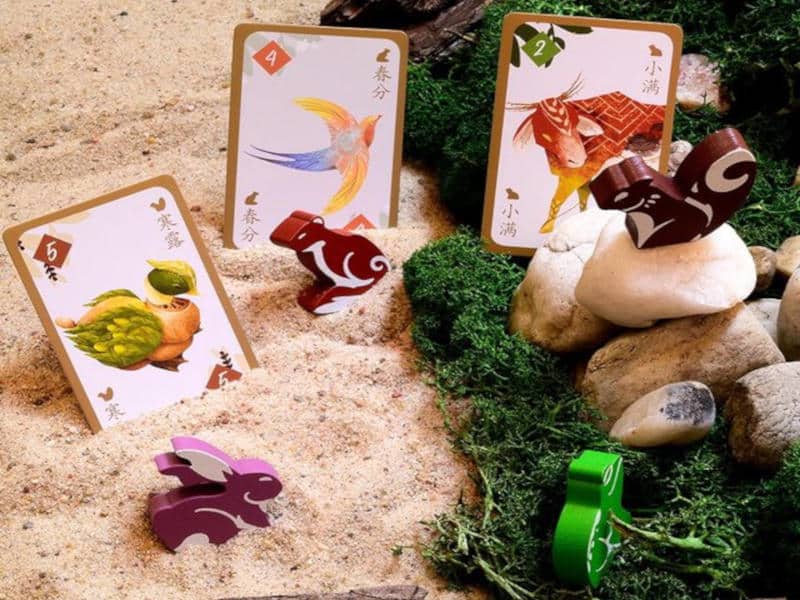 Here is another game in the Matchbox Collection, a set of five games that was on Kickstarter not too long ago. All games come in a wonderfully small box, stuffed full of gorgeous components, always consisting of a deck of cards and then, depending on the game, wooden tokens and/or metal coins. They’re all also beautifully illustrated, by a number of different artists and there is a mix of pure solo and two-player games and games that can be played anything between 1 and 4 players. Every game is pretty quick to learn and usually takes around 30 minutes to play, often less.

15 Days is a set-collection game, where you try and collect four sets of cards numbered 1 to 6, one of each suit. It sounds relatively simple, but of course, there are a few twists and turns that make this process a little harder. The first is, that you are trying to collect two sets in ascending order, 1 to 6, and the other two in descending order, 6 to 1. To make this task a little easier, you don’t have to play cards sequentially, but are allowed to leave gaps. The problem is, filling those gaps on a later turn is more costly, because every time you want to play a card to a set, you have to also discard another card from your hand, and if you want to play a card into a gap, then you have to discard an additional card.

That mechanism, where you don’t just play cards, but also have to discard cards every time, is the core part of 15 Days and is what creates the first puzzle you have to solve. Every time you play a card, to try and grow one of your sets, you have to decide which other card to get rid of. That wouldn’t be quite such an issue, if you didn’t also have a hand limit.

So, chances are that all cards in your hand would be a perfect fit for the sets you’re collecting, making it a real wrench to discard them. So you will start drawing cards that are less important, just so you can happily discard them, without feeling bad, but then you’re limiting your options as well. It’s a really interesting challenge and really gets your brain cells working.

Additionally, cards you discard will become available to other players, making it sometimes even harder to decide what to discard as you grow your sets. You don’t want to help another player win the game, but sometimes you have no choice. The player interaction is not only in the discard action, but also when you draw cards. Every player’s sets are open in front of them, giving you a chance to draw those cards that they might need and therefore slowing them down, as long as you don’t end up filling your hand with cards that others want, but that are no good for yourself.

Again, it’s a decision you have to take and is more about deciding which card to take first, before someone else grabs it, and not quite so much about taking cards away that others might find useful.

There are also special powers in the game. Each suit represents an animal that will give you a certain bonus, such as a bigger hand limit or allowing you to draw more cards on your turn. So you’re encouraged to focus on one suit first, to allow you to gain the specific bonus ability, which will give you an advantage over the other players.

You do have to be careful though, because your opponents can take the animal away from you, if they have more cards of that suit played in front of them. So sometimes it is actually beneficial to play cards into a set and leave gaps, just so that you can get an animal for yourself. The frog is especially valuable for this, because it reduces the number of cards you have to discard when adding to a set by one, effectively making playing cards free and filling gaps half the price. It’s a strategy worth considering.

There are also wildcards and so-called “feather” cards in the game, the former allowing you to complete a set without having to have the correct card, while the latter allows you to use an animal’s ability one time on your turn. Used correctly, these cards can make a difference between winning and losing a game.

Even though the game ends when one player has completed their four sets, it doesn’t mean they win the game. The final score is the sum of the longest sequence in each of your sets, e.g. if you have a complete set, 1 to 6, you get 6 points, extra points for each animal you have and minus points if you have started less than four sets at the end.

So sometimes it is worth you trying to play another round, if you’re behind on points, as long as you don’t give other players an opportunity to increase their lead even further, of course.

I think 15 Days is a really wonderful game. The illustrations are absolutely gorgeous, there are custom wooden animals, it’s small enough to take with you while you’re out and about, it’s pretty easy to teach and plays really quickly, while at the same time giving you enough of a challenge without being too taxing. It’s also an ideal filler game for that reason.

I am always looking forward to playing 15 Days and it will be a game that will stay around for a very long time.