UFO Wave is live on Kickstarter now. Find out more >>

We had reached the planet Earth. There were many of us who had been watching the people of Earth for a long time, sometimes interacting with humans, sometimes influencing events on the planet. We had come from different worlds, many light-years away, because we felt mankind was an interesting species and we wanted to help them become a great people. We just had to be careful, as we had been spotted, and it was time for another UFO Wave by Paradigm Games. 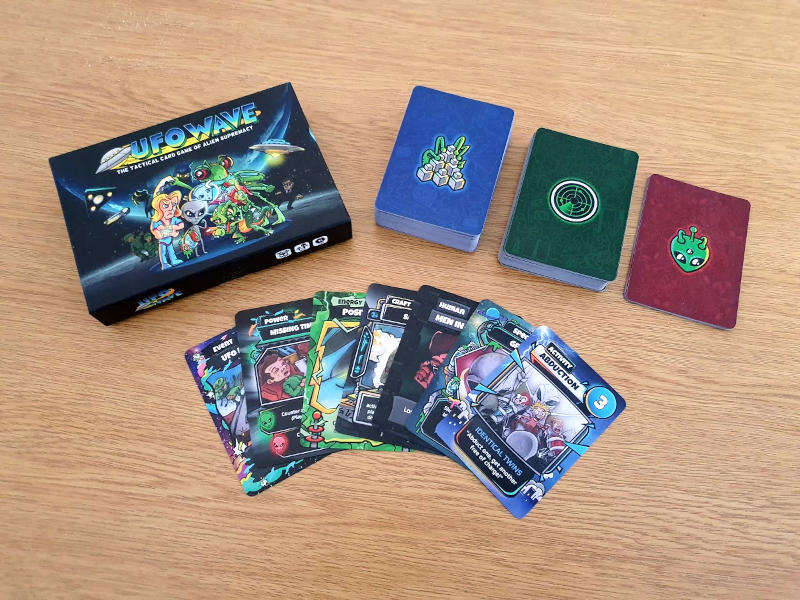 Here is a wonderful little card game, where everyone plays the role of an alien species who go about their business on planet Earth, trying to avoid being seen by humans. Each alien race has a different ability and will gain additional points for certain cards. It is a classic game of drawing cards from the so-called “plan” deck, which is basically a deck of cards which give you one-time abilities, such as stealing cards from other players, protecting yourself from humans and so on, and then playing cards from your hand to activate as many of those abilities as you wish.

Of course, the more “plan” cards you play on your turn, the less you have available on future turns, so you do have to plan ahead a little and find the right time to get the most out of those cards and avoid being without any protection when you really need it.

What makes UFO Wave stand out from other card games is that your main goal is to score points from the cards in the so-called “scan” row, which is basically an offer row of cards. You can take a card from that row and add it to your “score” pile, but depending on which card you take and what other cards are next to it, you may end up with additional points, you may get some minus points or you may even end up with a human who is watching you, meaning additional point losses at the end of the game, if you can’t get rid of them on a future turn.

In fact, the humans add another layer of player interaction, because you can “lead” them to other players, which means you take a human from the offer row and put it in front of another player, effectively giving them negative points. So instead of taking the human to your leader, you’re actually taking them to someone else, which is a lovely little twist.

There are also so-called “energy” cards, which come in positive and negative point numerations. If you take a card from the offer row, you always have to take any energy cards that are to the left and/or right of that card. That’s great when they are positive energy, but sometimes you have to accept negative energy, because it may be the best choice on a given turn, or it might deny an opponent an even bigger scoring opportunity.

These energy cards are especially nifty, if they are next to a human. You can lead that human to another player and then grab the positive energy attached to them to gain points. So not only are you giving another player negative points, but you’re also pushing further into the lead yourself.

The “scan” deck, which refills the offer row, also contains a couple of event cards, that are randomly shuffled into the deck at the beginning of the game. These one-time effects create a little bit of extra randomness, which is fun and creates a bit of variability, because you never know which two cards from a larger deck of event cards are in the current game, so you can never quite plan for them.

The illustrations are in a cartoon style that really adds to the enjoyment of the game and were drawn by someone who claims to have had a number of extraterrestrial encounters during his lifetime and his illustrations draw on those experiences. However, none of the artwork is scary, even if the aliens all look a bit strange to our eyes, and the whole gameplay is suitable for younger children.

So, overall I think this is a lovely little card game that’s good fun. There are many of the known alien tropes represented in the cards, which you will immediately recognize when you see them – but I don’t want to spoil anything for you at this stage. I would say UFO Wave is worth taking a closer look.