A massive magnetic storm had hit our moon base. All of our supplies had been hit and were now scattered in a 20-mile radius around the base. The base itself was intact and secure, but we only had a handful of supplies left, including oxygen. We had to work together to recover as much as we could to have any chance of leaving the Moon and returning to Earth. It was going to be tough, but we were all ready for our Moon Adventure by Oink Games. 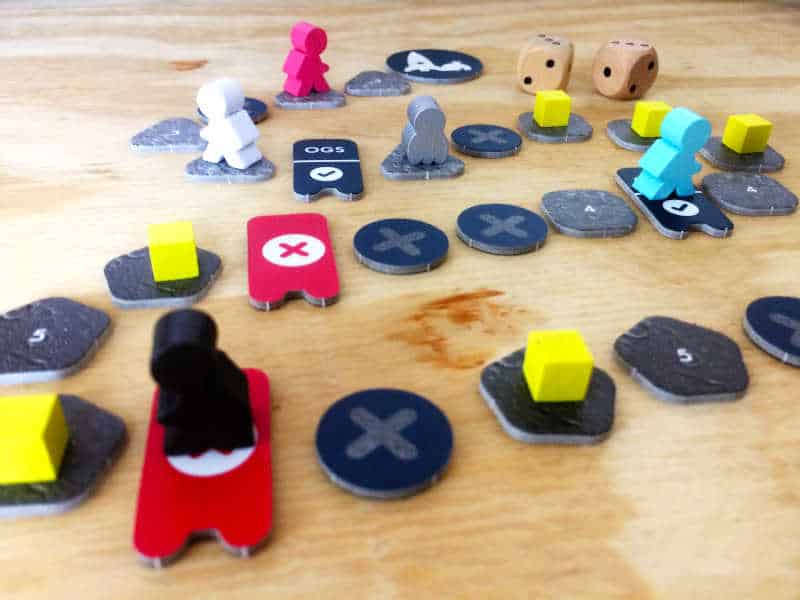 Of course, this is another review of a game from the wonderful Japanese publisher. I said it before, these games are great, because they come in a small box that’s rammed full of components, they’re easy to learn and usually very quick to play, but they give you enough depth to be appealing to people who like a bit of strategy and planning.

Moon Adventure is no different and it’s a cooperative game, which I think is rare for Oink Games. It’s basically a push-your-luck game where you try and go as far as possible along a trail of scattered supplies, all the while keeping an eye on the oxygen levels. The further you go, the more valuable the supplies will be, but the higher the risk of you dying. You have to work together and place oxygen generators along the track, so everyone can top up their tanks, improve the track to make travelling along it quicker, so that everyone can get to the more precious items, and also decide who picks up what supplies when, because everyone has only so much room to store things.

If you have played Deep Sea Adventure, then you will know how all of this works – the difference being that you all work together, rather than selfishly dive to the depths to get your own treasure. If you don’t know that game, then let me explain things a little bit more in detail – and even if you do know Deep Sea Adventure, it’s worth continuing to read, because there are quite a few nice twists that make Moon Adventure quite different to its sibling – and possibly more interesting as well.

So, imagine a track of small, face-down tiles, which represent the supplies. Each tile has a number on it, which you won’t be able to reveal until the very end of the game. All you know is that the further away from the moon base you travel, the higher those numbers are going to be and to win the game, you need to add up the numbers on the tiles you successfully brought back to the base and if that number is above a certain value, you’ve survived and will be able to make it back to Earth.

You roll either two or three of three-sided dice (they’re actually six-sided, but the pips only go up to 3), depending on how much oxygen you have left and that you want to spend. After all, you might want to keep a good stash of oxygen for later, when you more urgently need it. The dice results represent the action points you have to spend on your turn. Moving costs one action point, gathering supplies and placing an oxygen generator along the track each cost three, developing a route costs two, dropping supplies costs one and so on.

On your turn, you have to decide how much oxygen to spend, then roll the dice and finally choose how to spend those action points and in what order. Travelling along the track is the most obvious, but is also something you want to think about, because if you want to travel more quickly, you want to jump over your fellow adventurers or over developed spaces. So one of you will probably march ahead and place cubes onto tiles to develop them, meaning other players can jump over them for free, thus allowing them to travel further. However, it also means that those tiles can no longer be picked up, making the supplies they represent unattainable.

You also want to place oxygen generators, so players can stop on them to top up their oxygen tanks. The problem with the generators is that they lengthen the track. You insert them between two tiles, so now the journey to the end of the track is going to be one step longer. The other issue with oxygen is that it uses up valuable storage space. Every player has only so many slots available for oxygen and supplies. If you want to carry more supplies, you have to carry less oxygen. It’s another difficult decision you have to make.

There is more though. It’s not just your decisions that decide your fate. The game itself also tries to make it hard for you. There is a deck of cards that represent the oxygen that you can get when you land on an oxygen generator. The problem is, that deck also contains so-called “magnetic storm” cards, which will disable one of the oxygen generators you have placed along the route. Every time the deck is empty, you add another “magnetic storm” card to it. So the more oxygen you consume, the more likely you are to damage one of your oxygen generators.

So, like in every cooperative game, you’re unlikely to survive on your first attempt. You’ll definitely have to play the game a few times to see what you need to do to survive – and even when you all make it back to the moon base alive, you won’t necessarily have won. It’ll depend on what supplies you brought back. It ensures that you need to keep playing and practicing.

Given that the trail of supplies is random, the amount of oxygen you gain is random and the dice rolls are random, every game will play very differently. I suppose, in theory it is possible that you never stand a chance of winning a particular game, if you have really bad luck, but because the game is pretty quick to play, you can easily play again and thus even out the randomness a little.

Also, every player will take on a different role, giving them specific special abilities. The mix of roles can make your adventure harder or easier, depending on what you choose. However, it’s an interesting addition and I found that certain players prefer to play certain roles. Everyone will feel more comfortable doing certain things, I guess. It gives you additional variety, making Moon Adventure even more fun to play over and over again.

The game also doesn’t take up too much space on the table and as it comes in quite a small box, it’s the sort of game you probably want to have with you and play while you’re out and about. Now that we can start going out again, it’s one I’m going to have with me. It’s definitely a lot of fun and a good balance between being easy to learn while also keeping you thinking, without being too demanding.