It was panic stations – everyone for themselves. Even though we had arrived on the island in groups, all of that went out of the window. If you saw a boat, you did all you could to get on it and sail away from the island. There was no time. Bit by bit, the island was sinking. Some poor souls jumped into the water in a desperate attempt to swim to the mainland, but they had to contend with sharks and sea monsters. Nowhere was really safe. All we could do was Survive: Escape from Atlantis by Stronghold Games. 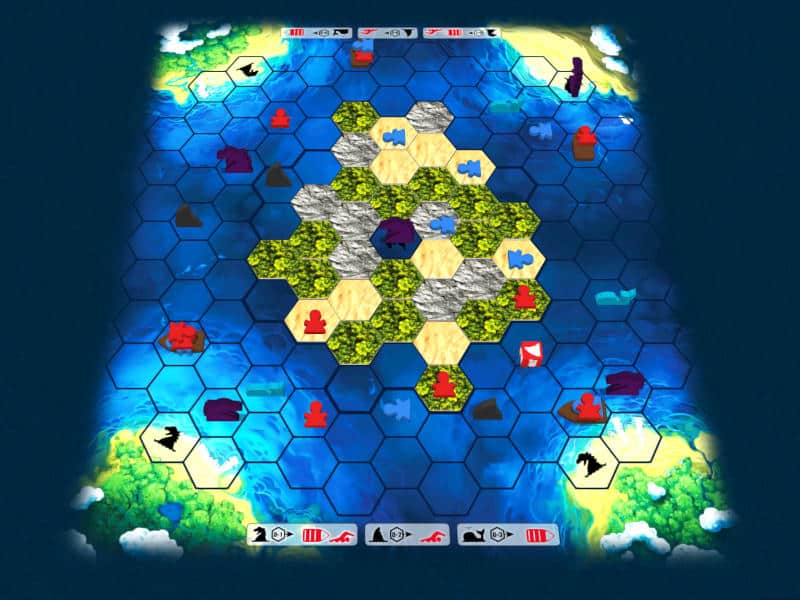 It sounds terrifying and is almost as if you’re watching a disaster film – and it sort of is. In Survive, as I’m going to call this game for short, everyone has a group of people that are on an island that’s slowly sinking and it’s your job to get as many of your people to the mainland as possible. Your best bet is to reach a boat and steer it to safety, but you can also take your life into your own hands and try to swim across the sea, and more often than not, that’s your only option.

The island is made up of different terrain tiles, representing sand, jungle and hills, which in turn stands in for low ground, middle ground and high ground. The low ground is going to be near the sea and therefore likely to be near a boat. It’s prime land for your people to be, but it’s also the terrain that’s going to be swallowed up by water first.

The middle ground is a bit further away from the water, but there is usually time to race past other people and make it to the relative safety of a boat, even if you might have to wait a little longer to find your opportunity. At least, you’re not going to be one of the first to land in the water and have to fight off sharks and sea monsters with your bare hands – which is futile of course and you’ll die trying.

The hills are last to go, but they are also much further in the centre of the island, making it much harder to get to a boat early on. However, sometimes it’s worth waiting for longer, hoping that the early boats will be bait for the attacking sea creatures, leaving a clear path for you to make it to safety with your people.

It’s all pretty straightforward so far, but the game isn’t that simple. On your turn, you do decide which meeple to move across the island, or which boat to steer, assuming you have the most meeple on it, or even which of your swimming meeple to push one hex space towards safety – or away from danger. However, the other thing you do on your turn is decide which part of the island sinks next, thereby probably dropping someone into the water, maybe even summoning a shark that gobbles them up straight away. It can be brutal for another player, but feel great for yourself. Similarly, it feels great when you roll the dice that decides which sea creature you can move and get to push other people off a boat or even destroy them and the boat in one foul swoop.

It’s only when you realize that the next player will be able to do something very similar to you that it dawns that this is really a terrible thing. You suddenly regret that you killed one of your opponent’s meeples. When it’s that player’s turn, it’s like being in a horror film. You know that you definitely must not get into the water, because that’s where the shark will attack you, just for another player to pull the land tile from under your feet and drop you in at the deep end. All you can hope is that a boat will swoop by and save you or that you can somehow safely swim to shore, and therefore to safety, praying all the while that everyone is busy attacking the bigger targets and leaving you alone.

Survive is absolutely ruthless, because it is so high on player interaction. Everyone is literally out for themselves. However, at the same time, it’s a really good family game. Maybe it’s cathartic, because the grown-ups are no better off than the kids, or because you can finally let your anger out at your sibling, without it coming to physical fisticuffs. Having a shark gobble up another player’s swimmers is harsh, but also feels devilishly good, even though you know for certain that they will pay you back.

It’s this tit-for-tat that I think reduces the meanness of this game. It’s because everyone is expected to be mean to everyone else, it’s as if nobody is actually that mean to anyone. At the same time, you will make uncertain truces with other players, that are likely to fall apart as soon as you get your people to the shore of the mainland and send a sea monster to destroy the remaining people on the boat, along with the boat itself.

The game also really captures the feeling of panic. The meeple you place on the island at the beginning of the game have different point values. You are supposed to remember who is who, but in the general confusion of getting to shore, you quickly forget that your most valuable person is on a boat that’s currently being steered by another player and heading for certain doom. You try to remember where the next highest value meeple is, but will find it hard to keep track, as there is so much happening as another player takes their turn. By the time it gets round to you, chances are that all you can do is get at least one of your people to swim to safety.

Let me finish by saying that I always only played the game digitally, so I can’t attest to the quality of the components or how the experience changes when you remove physical island tiles and drop “real” meeples into the water, or have a shark meeple gobble up one of your opponent’s survivors. However, I can only imagine it heightens the experience even further, adding to the feeling of evil pleasure and sheer panic.

If you want a fun game that’s really easy to teach and has a huge amount of schadenfreude, then Survive is definitely for you.