It was getting dark, which meant it was time to light the campfire. We had already collected plenty of wood and tinder and someone had started to build the first layer of the fire. Now we were going to take turns and add more wood to it. After all, we were on a teambuilding camping trip, so we had to show we could work together. Of course, most of us were very competitive and soon people were starting to show off. The head of marketing decided that adding branches vertically, balancing them on the base, was the thing to do. IT, of course, went one further and decided to light the fire in a couple of places to add extra peril. It was quickly turning into a mad competition of Tinderblox by Alley Cat Games. 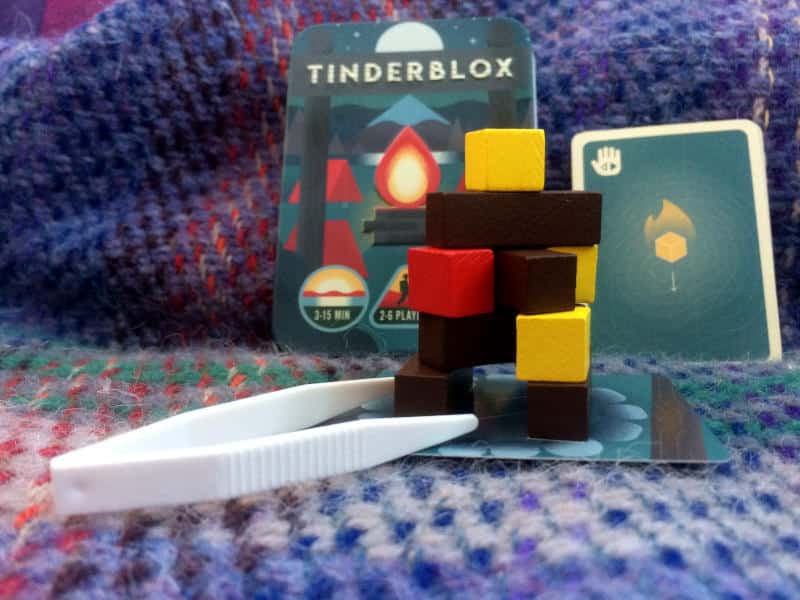 I think you get the gist. Here is a mad dexterity game, where you have to stack wooden piece on top of each other in a specific way. The more pieces have already been stacked, the harder it is for you to add the ones you need to add. If anything is knocked over or falls on the fire on your turn, you lose. That’s simple enough.

However, there are a couple of twists here. First of all, you have to use little plastic tweezers to pick up and stack the wooden pieces. That’s harder than it sounds, because the tweezers don’t want to really hold the pieces tightly, so as you pick things up, they move around and if you squeeze too hard, they fly across the table, knocking over the fire in the process, unless you’re very lucky.

The other twist is, that a deck of cards decides which pieces you have to stack and how. There are brown, long, square shapes, like the roads in Catan, which represent the logs, and cubes that are either red or yellow, which stand in for the fire. The cubes are a tiny bit bigger than the square face of the logs, meaning that your bonfire is very quickly unbalanced.

The cards, that tell you what to stack on top of the fire, can be quite easy, requiring you to add a single log or fire cube, but more often than not are more difficult. You might have to put a log vertically, then balance a red fire cube on top, before you can put the whole thing onto the fire. Of course, you always have to handle the pieces with the tweezers, taking them out of the tin one at a time, assembling them on the table, then lifting the assembled section onto the bonfire in the middle of the table. Some cards make it even harder by making you use your non-dominant hand.

It’s all a bit of fun, of course, and if you like Jenga, you will also enjoy Tinderblox. Most games are over very quickly, within 15 minutes, but the more you play, the better you get and soon you have assembled a giant, roaring fire that’s nearly touching the ceiling – or at least, that’s what it feels like.

The whole game comes in a mint tin, so you can imagine how small the cards are and the tweezers. I love mint tin games though, because you can easily fit them in your coat pocket, a rucksack or your handbag and have them with you everywhere. You just might want to make sure you play at a stable table or if you play outdoors, that it’s a quiet, calm day, without any wind, or you’ll be increasing the difficulty a few more levels.

So, if you want a quick, fun game, that’s easy to teach and learn, quick to play and fits in your pocket, then Tinderblox comes highly recommended.