Here is another review of a game that is quite a few years old. Bremerhaven by Lookout Spiele is from 2013, so over five years old, but it is probably the only game with a secret bidding mechanism that really works, and lots of player interaction without making you feel helpless if the other players gang up on you. There is also a huge time element in the game, that keeps you on your toes. To top it all off, the game also has a really fun theme, beautiful illustrations and a really tense gameplay. As you can see, I really like the game, so let me explain a bit more. 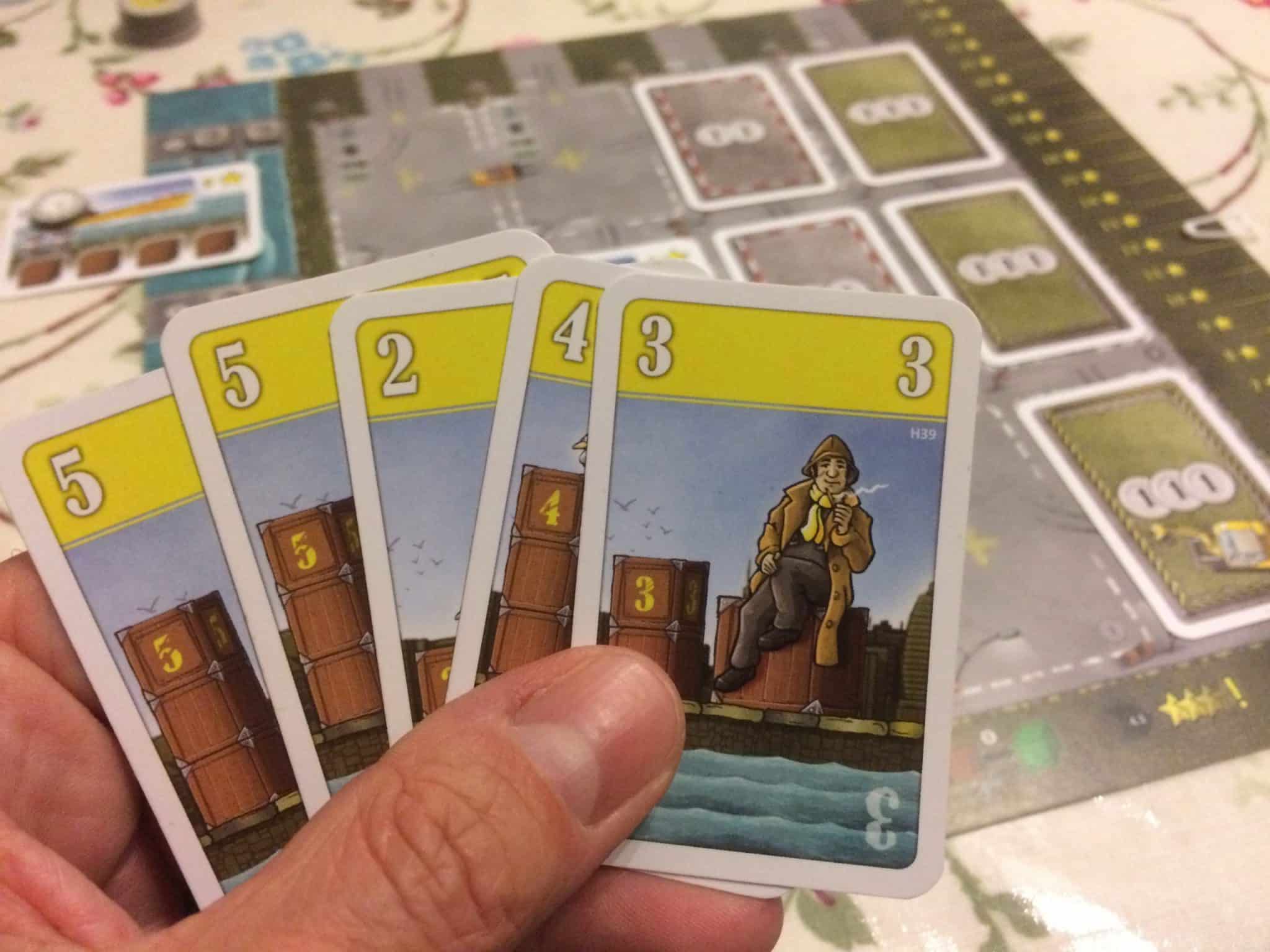 In Bremerhaven you are a harbour master constantly trying to improve your quayside to attract bigger and better ships, dealing with the logistical challenges of off-loading and storing goods and fulfilling contracts. It seems to be a simple resource management game, but you quickly realize that there is a lot more to it. It is vital that you plan ahead and ensure your harbour works at its most efficient and outperforms your opponents’.

Let’s talk about the mechanisms in this game that have attracted my attention. Every round there is a secret bidding phase, where every player places a single bid cards on an action space, or one of the ships or contracts that are lined up. The bidding continues until everyone has placed all of their cards. It is up to each player how they distribute their bid cards. You are allowed to keep bidding on the same action space, ship or contract if you so wish, or you can spread your bid cards more evenly. It is quite common that a bidding war erupts between two players on a particularly attractive ship or contract, allowing the other players to focus on less contested spaces.

The bid cards are numbered 1 to 5, but can be upgraded during the game, and you can place them in any order you like. It’s the cards’ combined values that decide who wins the overall bid. You can place your 5, while someone else places a 1 and a 2, and you win that bid. However, with everyone placing their cards face down, it is never clear how high or low someone has bid. Just because someone has placed multiple cards doesn’t mean they will win the bid. There is a lot of opportunity to feign a high bid, when in fact you only place a value 1 bid card.

The bidding is the only phase in the game where players interact – and interact they do. It is probably the most fun phase in the game because of it. There is a lot of posturing and pretending, creating a huge amount of tension and forcing you to try and work out what the other players are going for, so you can place your bids effectively.

As players upgrade their bid cards during game, they discard their lowest bid card and replace it with the next higher one. By the end of the game your bid cards can potentially consist of 6, 7, 7, 8 and 9, giving you a much stronger position. However, other players will also be upgrading their cards. In fact, players who didn’t upgrade their bid cards aren’t out of the running. Chances are that two strong players will start a bidding war over a specific action space, ship or contract, placing most or all of their cards on the same space, allowing the weaker player to spread their bid cards more evenly and win more bids, thus being able to catch up. It is a really nice catch-up mechanism, but you have to be clever about it and watch what other players are doing.

There are also other things to consider. Ships waiting to enter your harbour will get progressively bigger from round to round, so you have to upgrade your quayside to allow them to dock. You may also want to add buildings to your port which will allow you to store more goods or otherwise benefit you in some way. However, every building eats into the potential storage and maneuvering space available for off-loading ships and moving goods to contracts. In fact, to start with your harbour is not very big and you have to extend it to make room.

Yet, everything costs money and requires you to win the bid on the relevant action space to be able to do what you want to do. You also don’t want to end up with too many ships delivering too many goods, which will sit on your quayside and make it impossible for you to deliver them to waiting contract. It is very easy to run out of space and end up not being able to fully off-load ships. At the same time you don’t want too many contracts that you can’t fulfil or you will lose points. It is a constant balancing act, which forces you to really focus and plan ahead as much as possible. It also allows your opponents to see what you are trying to do, which means they can aim to outbid you on the action space, ship or contract that you seem to be planning on using in the next round.

To add to the complications, every ship and contract has a time attached to it. Ships in your port will stick around for a specific number of rounds, meaning that they may block valuable docking spaces, if they hang around for too long, or making it impossible for you to off-load the goods you need in the time you have. Similarly contracts will sit there, even if you have already delivered everything necessary to complete them, again using up valuable space – or they may come to an end before you had time to deliver the necessary goods, losing you points in the process.

The time element is something I haven’t come across anywhere else, and it is another thing that forces you to plan ahead, and something else that allows your opponents to predict what you might be aiming for on your next turn.

All of these things create this amazing puzzle that you have to solve, and which constantly shifts as you compete with the other players for valuable ships, contracts and action spaces. You can never do everything you want, so you have to make conscious choices all of the time. You also have to keep in your head what it is you’re trying to do while at the same time keep an eye on everyone else, so that you can pick the right moment and place your bids in the most effective way.

So if you like complex puzzles and a good amount of player interaction with a twist, then Bremerhaven is definitely for you. I always love to play it and my friends seem to really like it too, so I can highly recommend it.