In my second review I look at the fast-paced, two-player only wargame Lincoln by Martin Wallace and published by PSC Games and Worthington Games, which finished its Kickstarter campaign back in May. Just for disclosure, it was PSC Games who kindly sent me a review copy. The game is set in the American Civil War and you can choose between taking the side of the Union or the Confederate. The game is completely asymmetric, in that the Union and Confederate sides have different decks, different starting locations and strengths, and opposing aims. That in itself makes for an interesting game, but the mix of deck building and strategy board game creates an additional interesting angle. 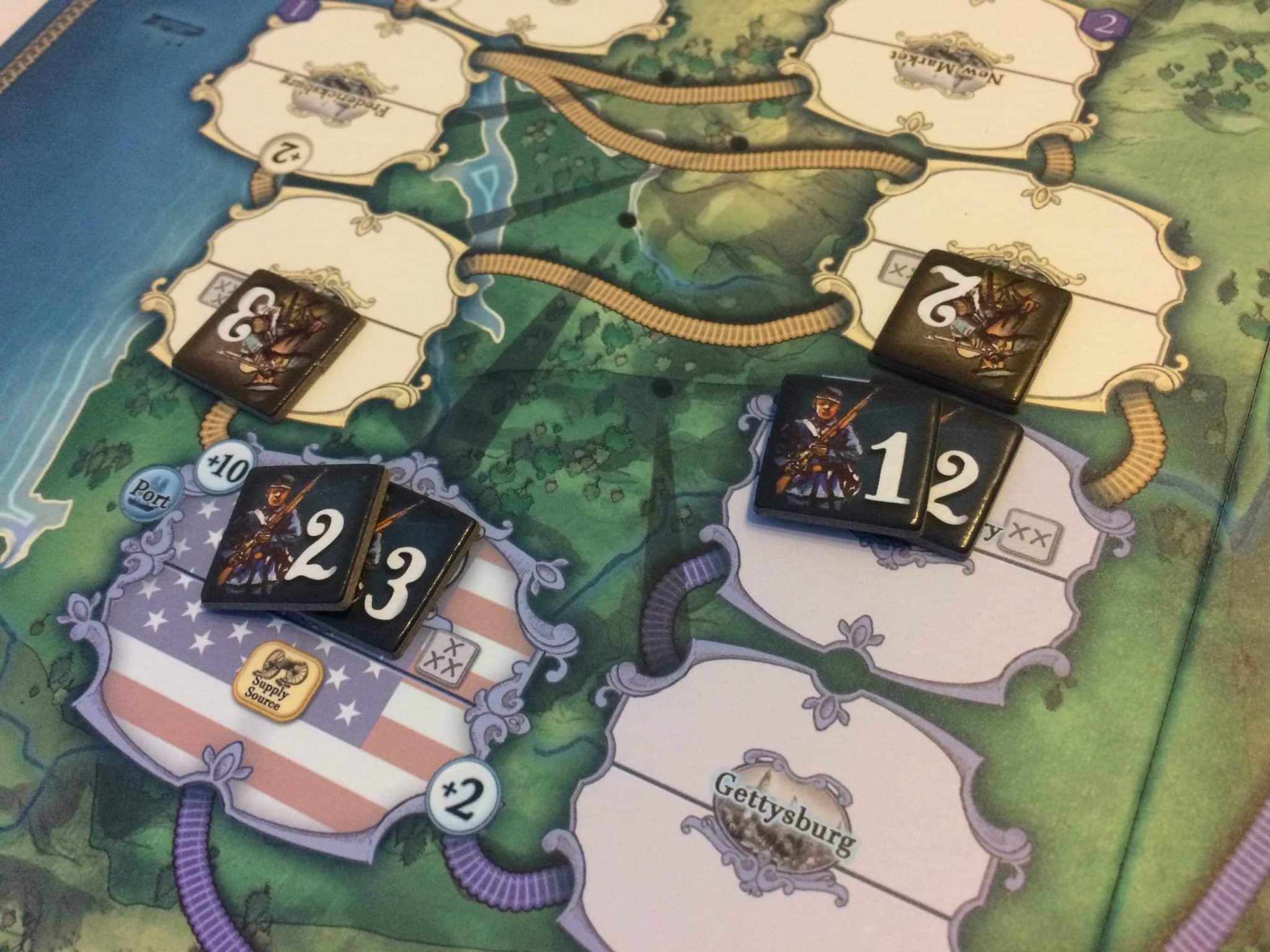 Like all deck building games, you have to balance the luck of the draw with deciding which cards to play, but instead of being able to buy from a central pool of cards, you simply always draw back up to your hand limit at the end of your turn. That reduces the amount of influence you have over your hand, but here comes the twist. Instead of buying cards, you play cards to carry out actions, which you have to pay for with additional cards. It is the choice of what cards to use as payment that makes the game so interesting. You are sometimes forced to choose between paying with a valuable card simply to carry out a critical action, or delaying that action and doing something else, just so you can keep the valuable card for later.

Lincoln, like all deck builders, also has an element of cycling through your deck. One of the two actions you can carry out on your turn is discarding cards. You only get to draw back up to your hand limit at the end of your turn, but discarding some or all of your cards as your second action is sometimes the best option if your hand is simply no good to you at that point in time.

Speaking of discarding and spending cards, that is probably one of the key elements of the game. Every time combat takes place, the attacker has to spend one card, which usually is played to increase the attack strength. The defender has the choice to also play a card, or save his hand. However, if the defender decides not to play a card, they are more likely to lose combat. So they are more likely to play a card to defend themselves, but that means they will start their turn with less cards, because players only draw back up to your hand limit at the end of their turn – not at the end of the opponent’s turn. So having to defend yourself in two consecutive combats means you start your turn with two less cards, reducing your options immensely.

Yet, the Union player constantly plays against time. There are three checkpoints in the game when the Union player has to have achieved a certain number of victory points, or they will immediately lose the game. That creates a huge pressure on the Union player to be on the offensive virtually from the start, allowing the Confederate player to slowly build up troops for defence and hopefully eventually grow strong enough to attack.

Mind you, there are many strategies you could play in this game. Early attacks aren’t always the best choice and often it is better to draw out the enemy and weaken them slowly, before dealing the final blow.

Yes, there is a board in this game, which is where the war strategy really comes alive. It reminded me a little bit of Axis & Allies, where you physically move your units around the board and slowly push back your opponent with each combat, all the while watching your flanks to ensure you do not get cut off at the back. In Lincoln every combat location is divided into two parts, allowing both sides to be in the same place at the same time, without combat actually occurring, but always being threatened. You never know when the opponent might strike and it is this feeling that creates a really intense atmosphere in the game.

Of course, like all war games, Lincoln also deals with a serious subject matter that will not be to everyone’s taste. The topic of slavery in particular is something that cannot be ignored, and I don’t think the game tries to downplay anything. So you have to be comfortable with war games set in significant times of history, in order to enjoy the game. If you do, then you will love Lincoln which really has a great mix of deck building and board game, which requires all your strategic thinking to win the game.